A couple of months ago, a Chinses smartphone company launched Oppo R17 and Oppo R17 Pro smartphones in its home market, China. Now, it looks like the company ready to launch another smartphone called Oppo R17 Neo. The R17 Neo smartphone specs leaked online and indicate that it is the lite version of the Oppo’s R17 smartphone.

According to the Leaked information, the Oppo R17 Neo will come with 6.41-inch AMOLED display panel that supports 1080 x 2340 pixels of resolution. The screen resolution of the R17 Neo is same as the Oppo R17 smartphone, which means the Oppo R17 Neo will also feature with a waterdrop notch design on top of the display. The will be available in two color options, Mocha Red and Astral Blue. The body dimensions of the phone are 158.3 x 75.5 x 7.4mm and it weighs 156 grams. 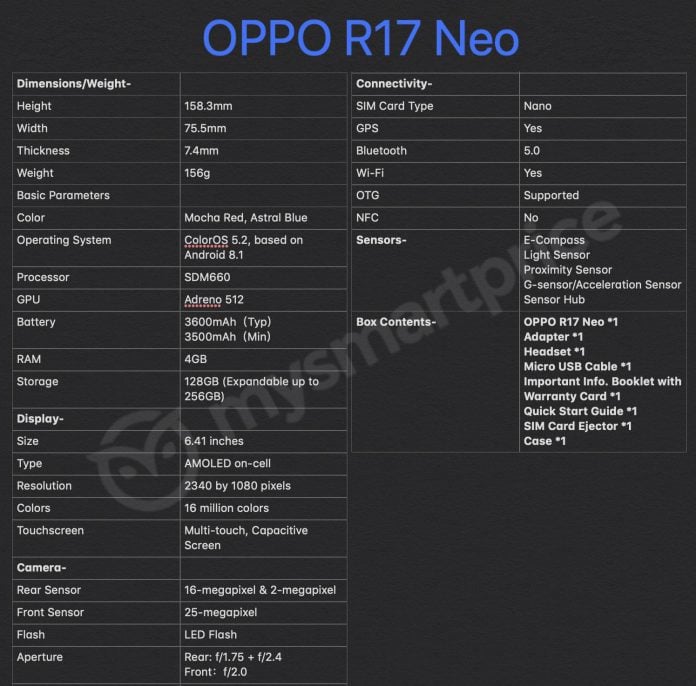 Oppo launched the R17 with Qualcomm Snapdragon 670 processor and R17 Pro with Snapdragon 710 processor under the hood. The leaked specs revealed that the Oppo R17 Neo packed with Qualcomm Snapdragon 660 chipset under the hood. The phone has 4 Gb of RAM and 64 GB internal storage option along with micro SD card support up to 128 GB. It powered by 3600 mAh battery capacity. The R17 Neo runs on Android 8.1 Oreo operating system out of the box along with ColorOS 5.2 running on top. On the board, it has Adreno 512 GPU for better graphics experience.

Last week, an Oppo smartphone appeared on the website of China Telecom with the same these specs, called Oppo R15x. Probably, both the Oppo’s R17 Neo and R15x are the same phone and may launch in different markets with different names.