Great news for  Moto X4 Android One users. Now OPW28.46-3 Android 8.1 Oreo Update is now rolling live for Moto X4 Android One version. The update is rolling with build number OPW28.46-3 for the device in this system level step-up. Along with this build, your phone will upgrade to latest Google Security patch of March 2018. Along with the upgrade to Oreo 8.1, it brings the Pixel 2 launcher look as well as dark and light themes. This software upgrade also brings redesigned Power Menu, new Shutdown and Reboot Animation, Round Statusbar Icons. A few minor performance improvements accompany the Moto X4 OPW28.46-3 Android 8.1 Oreo Update.  Also, we believe the standard version of the phone will likely get the 8.1 update soon. 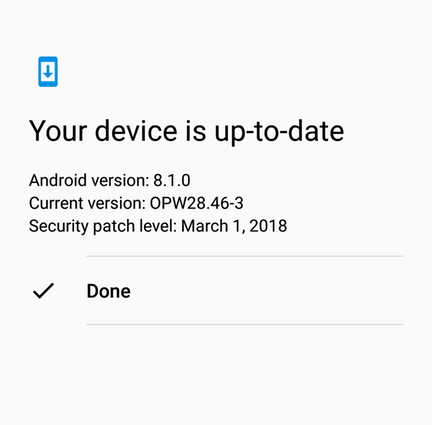 Moto Z Play is a dual SIM smartphone launched in November 2017. The phone comes with a 5.20-inch touchscreen display with a resolution of 1080 pixels by 1920 pixels. It runs on 2.2 GHz QualcommSnapdragon 630 processor and 4 GB of RAM. It comes with Android 7.1.1 Nougat out-of-the-box. This device packs a 64 GB of expandable internal storage. The device brings a 12-megapixel primary camera for the rear and 16-megapixel front face camera.

You can download the OPW28.46-3 Moto X4(Android one) OTA in India in two ways. Either you manually capture the airborne OTA or manually install the OTA firmware.

** Firmware Link Will Be active Soon **

Before proceeding with the manual flashing, remember these.

You will also require the Minimal ADB tool for flashing this OPW28.46-3 Android 8.1 Oreo for Moto X4 manually.

Step-5 Open ADB on your PC

Step-6 Connect your device to the PC using the micro USB cable.

Step-8 Press enter and it will start.

That’s all you have to do.  If you have any queries let us know through comments.

Follow GetDroidTips to get all the latest Android Oreo firmware updates for Motorola Android smartphones.