Motorola is one of the oldest smartphone manufacturers in the world. Moto X4 is the latest 4th Generation X Series smartphone by Motorola Company. This is an affordable rock solid dual camera and Water resistant smartphone. In this tutorial, we will help you to perform Factory a Factory Data Reset on Moto X4.

Nowadays Smartphones have become our family members in the present scenario. We often care them, maintain them and in fact, we have made them a part of a very large number of tasks we perform in day to day life. It is true that things can go out of control anytime with a device. Many times a user fails to know what exactly the issue with their smartphone is even after everything seems to work fine. If you own a Moto X4 are experiencing some minor issues with the same, we guide you on how to perform a Factory Data Reset on Moto X4.

The fact is many times smartphones experiences problems when we need them in an emergency. Imagine a situation you are in a middle of something and have an emergency. In case your device faces issues in such a situation, a factory data reset can surely bring it into a good working condition at least for the time being. A factory resets to let you have a novel start by deleting everything on your smartphone. Of course, you can save data before you proceed, but because factory reset erases everything, all the viruses and unauthorized files present in the device will also be gone. We mentioned a few steps in this post that are useful for performing simply both a hard and soft factory reset on Moto X4. 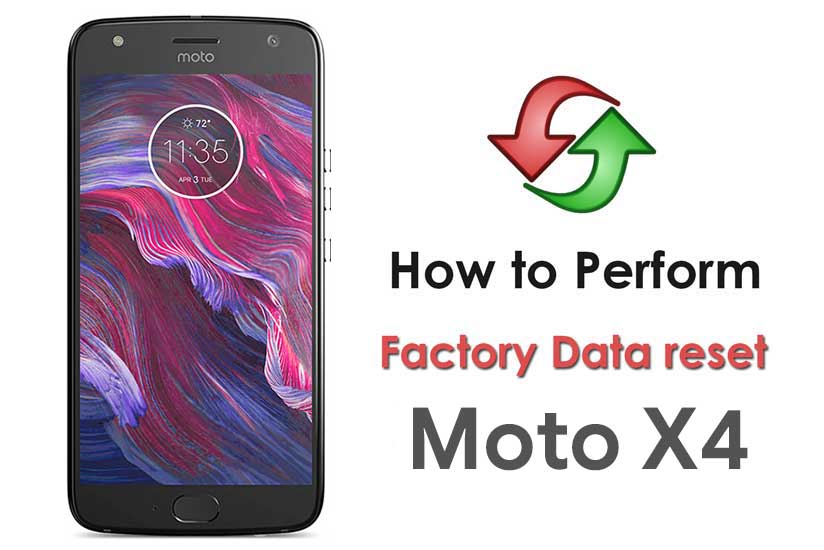 How to perform Factory Data Reset on Moto X4

Everyone can have his/her own reasons for performing a factory reset on Moto X4. Having a fresh start with Android, selling the phone, or boosting the performance are some of the common reasons why most of the users go for it.  There are two options available actually to keep up the pace. One is a hard factory reset while other is soft factory reset. Both these methods are good and will bring similar outcomes when you choose to perform Moto X4 factory reset. Basically, a soft reset is considered as best when you are able to boot into Android. This is due to the fact that it’s easy and quick. On the other side, if you are not able to boot into Android, you can go with Hard Factory Data Reset on Moto X4.

It’s worth mentioning here that you must keep the backup of apps, data or anything important you kept in device before you actually perform the factory reset. It really doesn’t matter which method you choose, results will be similar. It is recommended to you to go with hard reboot only in case you are not able to boot into Android.