Anyone who is an avid PUBG gamer, he must have made use of throwables in the game. Okay, let me simplify the terms. You must have used the Grenades, smoke grenades and stun grenades while playing PUBG. Some underestimate the damage grenades can do. Nade, as it is colloquially termed by the PUBG players, is available in all of the maps. In PUBG, throwing a grenade can be useful if you cook it well. So, in this post, we will tell you how to Cook Grenade in PUBG Mobile. In fact, we will also put up the guide to do it while playing PUBG on a PC or Xbox.

I know a few of you who are new or inexperienced in PUBG would be wondering how the heck one cooks a grenade.? What does it even mean.? Well, in this guide, we will clearly explain the concept of grenade cooking and associated phenomenon. Check out the guide below.

Related | How to Get Better at PUBG: Important Tips and Tricks

What is Grenade Cooking in PUBG.?

I will explain in simple statements so that newbies to PUBG can understand the concept. You must have observed when you throw a grenade, a timer pops-up above you. This is a 5-second timer. So, once you press the throw button, the explosive will have a 5-second window after which it will blast.

However, the question is, if the enemy is clever and overhears the incoming grenade falling then he will run for cover. Then how can we inflict quick damage? We can do that by cooking the grenade. 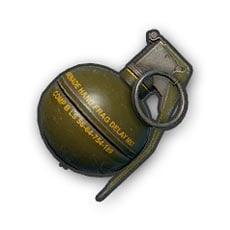 Simply, hold the grenade for 2-3 seconds(this will vary depending on the situation) before throwing towards your target. So, once you throw it, the grenade will follow the trajectory(the red line that shows up once you unpin and decide the target of the grenade). By the time it will fall near the enemy, the remaining 2 seconds would have passed. Within a split second of its falling, the grenade will explode.

The enemy won’t get enough time to find a cover. Either he will get knocked out/killed or at least will sustain heavy damage. This will lower the HP of the player. The trick is to time the throw well and adjusting the trajectory so that the grenade falls at our desired location.

Don’t do This Mistake

Sometimes a wrong trajectory can lead the grenade to hit a wall fall back near the thrower. It’s needless to say the grenade rebounds and explodes near you injuring you and your squadmates. So, be careful about the timer. Cook it for 3 to 4 seconds before throwing. The remaining 1 or 2 seconds will pass while the explosive travels over the air. Then as it will fall near the enemy, we hear the explosion.

Sometimes an inexperienced player keeps the unpinned grenade while the timer runs out for 6 seconds and that grenade bursts there itself. It’s ridiculous and you stand the chance of getting reported by your own squad mates for hurting them. Also, it’s a sheer waste of time for someone who is playing along in your squad and is chasing Tier.

Grenade explosion won’t affect a player if he is behind the cover of any wall. However, standing near vehicles may cause them damage in case the vehicle explodes. The fragmentation can also pass via the lower section of the vehicle and hit you if you try to take cover behind the vehicle.

Read Now | How to Use VSS Sniper Rifle in PUBG Mobile

How to Cook Grenade in PUBG Mobile, PC, and Xbox

Now that we have a clear idea about the underlying mechanism of how grenade should be used to maximum advantage, let’s check out the controls we can use to cook grenade in PUBG Mobile/PC/Xbox.

Cook Grenade in PUBG Mobile is quite easy.

So simple, isn’t it.? Timing is the key. Otherwise, the enemy may get you. You can even have a squadmate engage with the enemy to distract them while you cook the grenade. It’s pretty much situational and perfection will come with gradual practice.

Do You Know | How to Restore A Hacked PUBG Account

This is how you throw a grenade in PUBG PC.

Once your desired timeframe of grenade cooking is done, you can also click the right mouse button to throw the nade in an underhand manner. It is good for hitting the enemy who is in your vicinity.

Example: Let’s say some squad has spotted you and they are approaching the door of the building you are present. So, you cook a grenade and do an underarm throw on the stairs or near the door. As the squad will enter the door, if the timing is perfect, the nade will explode near them.

Check it Out | How to Fix the PUBG Settings Error

Here is how to use the controls to launch and cook a grenade if you are using Xbox to Play.

If you are dealing with a squad holed up in a 2-story building, then try to throw a nade into the building through the window. In case someone gets knocked out in there, without losing a moment, rush the building with your team.

However, I suggest that instead of entering through the doorway, try entering via windows. Use different windows if possible. The reason is simple. The enemy squad knows that you will now enter the building.

If they are more than 2 in number, one member will revive the knocked guy. The other 1 or 2 will setup tactical watchpoints in the corners or in the stairway top. They will assume that you will enter through the doorway(most cases this is what happens), so they will cook and throw a grenade near the staircase or door.

If all of your squad enter from the door, there are chances that you will get hit by the grenade explosion. So, instead, take a detour and enter through windows and storm through the stairway. By this even if the grenade explodes, it won’t cause much damage as you would be away from it.

Sound is important. You can always hear it if a grenade gets unpinned and thrown. Hence, plan your move accordingly and be quick. Also, to confuse an enemy more, you can enter the stairs doing free fire or simply when you are outside the building, do a bit of free fire.

Keep one member in your team to check in the small rooms. Sometimes knocked out guy from enemy squad crawls up to these secure spaces along with the revive guy to safely get the revival done. So, your squadmate can handle them and finish them off.

So, that was all about how Cook Grenade in PUBG Mobile and other platforms. In case you have always hesitated to use grenade in PUBG, try cooking and using them by following this guide. It may take a while till you get a hang of how things work. So, practice. You can use the tutorial practice ground. Do let us know your improvements.