The Razer Phone January 2018 Security Patch Update is now seeding. The latest update patches the Meltdown and Spectre security threats. It brings important changes to the camera. Image quality is expected to improve and fine tune after this update. The most notable update is it now supports Netflix with HDR  playback support. Dolby 5.1 Audio support also follows this monthly update. See the changelog below to know what else this update brings.

Razer Phone January 2018 Security Patch Update is rolling over-the-air(OTA). Since it is rolling in waves it will take some time to reach all the devices. You may like our tutorial on how to turn on Notification dots and badges on Razer phone. 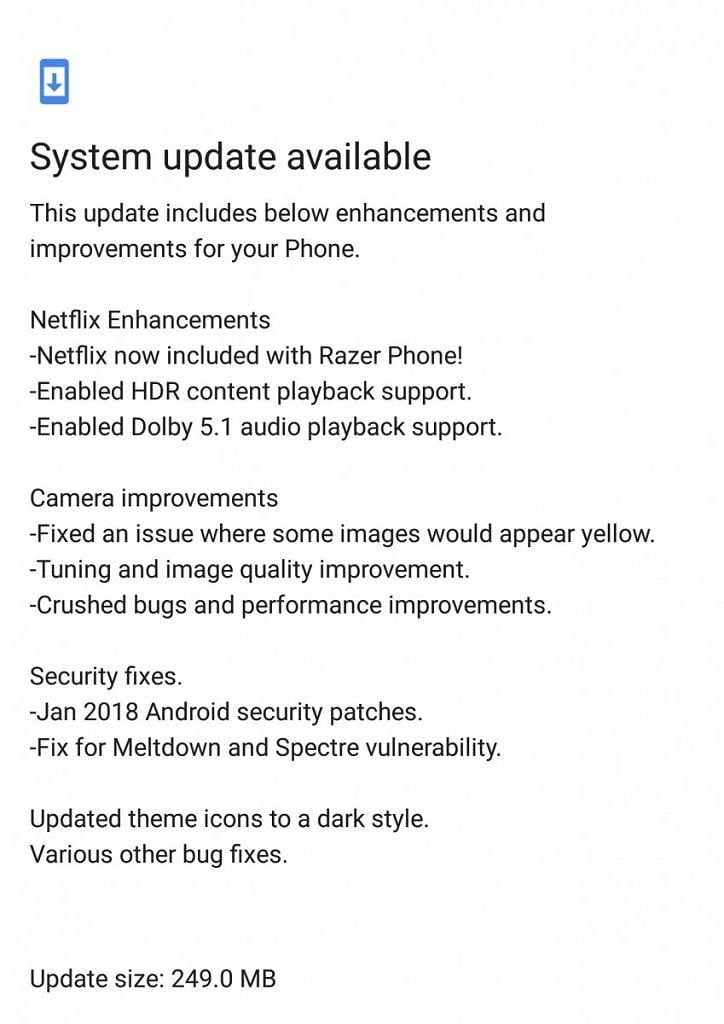 Razer is an American company founded by Min-Liang Tan and Robert Krakoff. Its head office is in San Francisco, California. They specialize in PC and smartphones with hardware suitable for gaming. In 2017, Razer launched its first smartphone, the Razer Phone.

Razer phone is a dual SIM smartphone launched in November 2017. The phone comes with a 5.70-inch touchscreen display with a resolution of 1440 pixels by 2560 pixels. It runs on Quadcore Qualcomm Snapdragon 835 processor and 8 GB of RAM. It comes with Android 7.1.1 Nougat out-of-the-box. This device packs a 64GB of expandable internal storage. A user can expand it to 2000GB.  Razer phone brings a 12-megapixel primary camera on the rear and an 8-megapixel camera on the front.

Go to Settings–> About–>System update and press Check update. Make sure if the software is the latest version. If you have the update, then follow the on-screen instructions to download and install it.

So, that’s it. If you use a Razer phone do not miss this update. It brings really important updates, so make sure you grab them.