Updated on December 14, 2020: A combined November and December security patch is now rolling out for the Realme X3 SuperZoom smartphone. Notably, the update arrives with version RMX2081PU_11.A.47 and also brings a bunch of fixes and some new features for the phone. The size of the update is 3.58GB. So, you may want to download the update on a stable and fast internet connection. Here is the complete changelog:

Photos
● Fixed the probabilistic screen flicker when editing the album

Updated on November 9, 2020: A new update is live for the Realme X3 SuperZoom. Notably, the update brings the October 2020 security patch for the smartphone. Not only this, but the update also brings along tons of new updates like optimization for Game Space, fixed network issues, album issues, status bar, and several system issues as well. There are some new addition to the Settings page like added toggle for system icon, sunset to sunrise toggle, and toggle for display keyboard. The update arrives with version number RMX2081PU_11.A.45 and weighs in around 3.54 GB in size. Here is the complete changelog of the update:

Updated on September 27, 2020: Good news for the Realme X3 SuperZoom users because the September 2020 security update is now rolling out for the Indian devices with version number RMX2081PU_11_A.43. It brings tons of new fixes for the device like it add SoLoop video editor, fixes the file manager crashing issue, fixes the display issue of the battery icon in the status bar when switched to power saving mode, fixes the issue of not being able to turn down the brightness level, fixes gaming issue and much more. Here is the complete changelog of the update:

Updated on August 29, 2020: Realme is now rolling out the latest August 2020 security patchset for the Realme X3 SuperZoom smartphone. Note that the update arrives with version number RMX2081PU_11.A.41 and along with the latest security update also brings tons of new features like the super nighttime under realme lab, auto-scroll while taking a screenshot, super power-saving mode, multi-user feature, icon pull-down gesture, and several other systems fixes. Here is the complete changelog of the update:

● Added Quick guide feature in the other settings interface

Finally, after months of tease and speculations, the Realme X3 SuperZoom has bee launched officially. As the name might have given you a hint, the device is more camera focused but holds good internals for being a complete package. Well, the device has picked up the name SuperZoom from its 8MP 122mm 5x periscope zoom camera. Off late, periscope zoom or super zooming features have been one of the selling points for most of the smartphone OEMs like Samsung Galaxy S20 Ultra, Huawei P30 Pro, etc. and it seems like Realme has also joined the bandwagon.

Talking about some specs, the Realme X3 SueprZoom comes with a 6.57-inch 1080x2400px IPS LCD with a high refresh rate of 120Hz which is growing common for most of the 2020 smartphones. Even mid-rangers like Poco X2 is spotting the 120HZ refresh rate screen. The fingerprint scanner is placed on the side of the Realme X3 SueprZoom making it more of a thumb-scanner. It comes with the not-too-old Snapdragon 855+ chipset coupled with 12 GB of RAM and UFS 3.0 storage for fast data transfer. 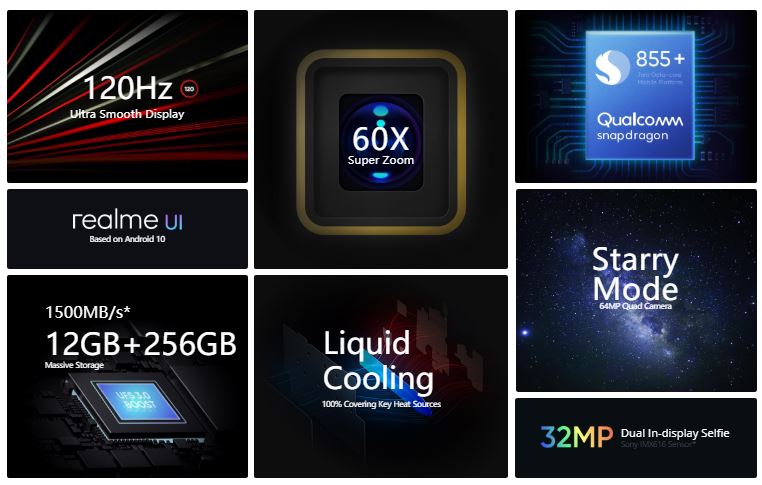 Realme X3 SuperZoom, has a 64 MP primary camera, 8MP ultrawide camera and a complimentary 2 MP macro camera. The phone offers Nightscape 4.0 which gives the users the ability to use pro mode to capture photos in the night or dim light. The phone runs on the latest Realme UI based on Android 10 and as per the default update cycle of Realme, the device is well in line to receive the Android 11 OS along with the Realme UI 2.0 update, whenever, the company rolls out the update. Usually, Android smartphone OEMs pushes two major OS updates for all its phones with some exception to the list. And Realme follows the same.

And as per that, the Realme X3 SuperZoom will definitely be getting the Android 11 (Realme UI 2.0) update. As of now, there is no official confirmation from Realme as to which are all the phones that will be picking up the Android 11 updates, but one thing is clear that the devices running Android 9 and Android 10 out of the box, will surely pick up the Android 11 Realme UI 2.0 update.