Back in September 2019, Xiaomi has launched its latest smartphone in the budget segment, i.e they have launched their Redmi 8A in India. Xiaomi has also announced its latest MIUI 11 in the previous year and started rolling out this update for most of its smartphones. However, for certain devices, this update doesn’t come with the latest Android 10. For instance, devices like Redmi 4, Redmi 4A and all other older devices that were launched earlier by Xiaomi.

Although, the Android version doesn’t matter for bringing up new features for Xiaomi in their smartphones. Xiaomi has been slowly updating their latest offerings into Android 10. So coming to the topic, that the Xiaomi Redmi 8A has been spotted in GeekBench running on top of Android 10.

Back in November 2019 itself, the new Redmi 8A received the MIUI 11 update, but this custom skin was running on top of Android 9 Pie. Despite being an entry-level smartphone, Xiaomi is providing Android 10 updates for their Redmi 8A which is based on the latest MIUI 11. We never thought that this device would get the Android 10 update.

GeekBench Listing of 8A with Android 10!

The GeekBench listing is a good sign that shows us that the Xiaomi is already testing the new update in the Redmi 8A. However, we don’t have any information when the brand will start rolling out this update.  But as the device is found in the GeekBench listing, it may receive the update within a few months. 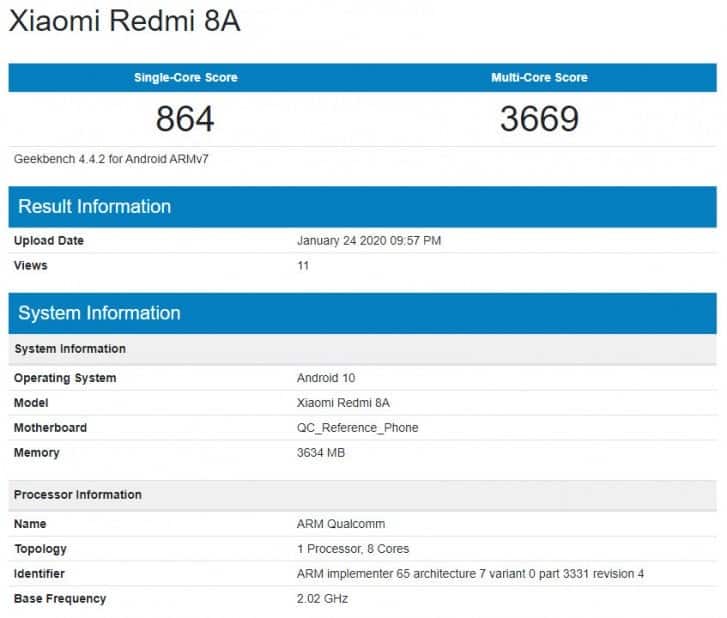 Talking about the scores in GeekBench, the Redmi 8A with Android 10 scores a 864 points in Single-Core scores and 3669 in Multi-Core scores. The 3GB variant of the Redmi 8A has been used for GeekBench testing.

The Redmi 8A was one of Xiaomi’s best surprises in 2019. Because the pricing of the handset starts with an affordable price tag and also with decent specifications. But the best part of this is that the device sports a massive 5,000 mAh battery and it charges over a type c port.  Digging into more, the device also supports 18W fast charging. All these make the best surprise by Xiaomi in India. Xiaomi launched this smartphone in India even without entering its home market i.e. China.

The Redmi 8A sports a 6.2-inch HD+ Display with a resolution of 720 x 1520 pixels and a pixel density of 270 PPI with a waterdrop notch. The display has a screen to body ratio of 81.8% and can blow up to 400 nits. Corning Gorilla Glass 5 protects the smartphone. It has a plastic back and plastic frame; this is enough for an entry-level smartphone. Underneath the Redmi 8A, it sports the Qualcomm Snapdragon 439 chipset which pairs with Adreno 505 GPU.

This chipset has an octa-core setup which includes 2x 1.95 GHz Cortex-A53 & 6x 1.45 GHz Cortex A53 cores and is built on 12nm process. Further the SoC pairs with 2 and 3GB of RAM and 32GB of internal storage. This is further expandable via a micro SD card up to 512GB. Yes, it has a dedicated SIM slot i.e. it can have 2 Nano SIM’s and a micro SD card.

Coming to the optics, the device has a single rear camera setup. This single-camera setup includes a 12 MP sensor with an f/1.8 aperture value. It also supports dual-pixel and PDAF. Further, the device also comes with an LED flash and HDR options. Despite having a single sensor it can take portrait images. To the front, it has an 8MP sensor with an f/2.0 aperture value. Both the front and rear can do videos up to 1080P @ 30 fps.

Other Specs and pricing!

This entry-level smartphone also has support for splash-proof P2i coating which we have seen on other Xiaomi phones. As said above, one of the highlights of this smartphone was the 5,000 mAh battery which charges over a type c instead of the regular micro USB port. Further, it also supports 18W fast charging tech. Connectivity options include Wi-Fi 802.11 b/g/n, Wi-Fi Direct, hotspot, Bluetooth 4.2, A2DP, LE, GPS with A-GPS, GLONASS, BDS and FM Radio with built-in antenna. Sensors include Accelerometer, proximity, compass. The device is available in three color options namely  Midnight Black, Ocean Blue, Sunset Red. Coming to the pricing of the Redmi 8A, it starts at RS 6,499 for the 2GB RAM and 32GB Internal Storage variant and RS 6,999 for the 3GB RAM and 32GB internal storage variant. When launched the device was available in Flipkart and Mi.com.