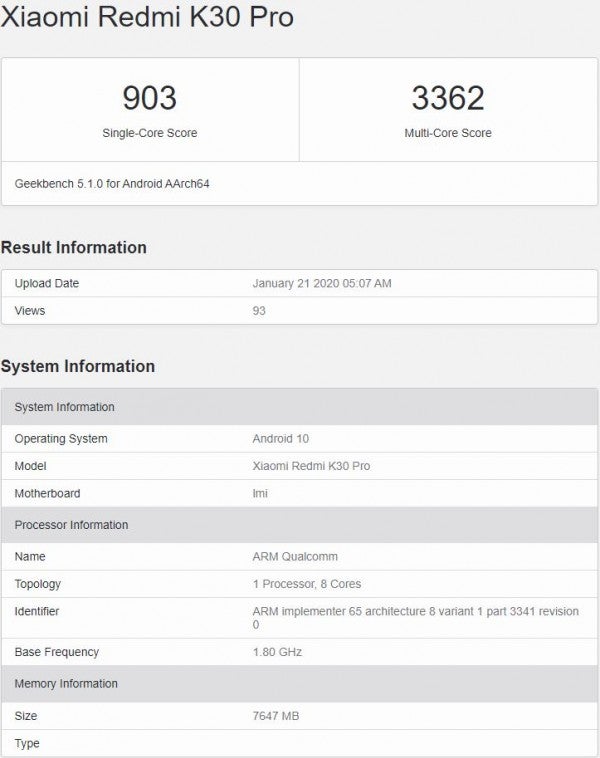 As we said above, the Redmi K30 Pro has entered in the GeekBench 5.1 listing. The device comes with a Qualcomm Snapdragon 865 SoC which pairs with 8GB of RAM.  The smartphone scores 900 in Single-Core tests and 3300 in Multi-Core tests. The device runs on the Android 10. This means that the device will run on top of MIUI 11.

There were rumors about the K30 Pro will sport the Qualcomm Snapdragon 865 SoC. But now with the GeekBench listing, this is confirmed. The device will also have dual punch-hole and 120Hz refresh rate display as the K30. There are some reports that the K30 Pro will sport an FHD+ OLED Display. It will also carry support for an in-display fingerprint scanner. We can’t expect that the device to sport an OLED display with a 120Hz refresh rate because the K30 Pro’s prices will be cheaper. But if K30 Pro joins the OnePlus 8 for offering OLED display with a 120Hz refresh rate, then it would be possible. Apparently there are reports which suggest this would sport a 6.67-inch screen.

The Qualcomm Snapdragon 865 Soc will pair with 8GB and 12GB of RAM and 256 / 512GB of internal storage. Coming to the optics the K30 pro will also sport the same setup like the Redmi K30. Even though they are the same configurations, there would be a drastic difference in camera quality. Since the Snapdragon 865’s ISP is more powerful compared to the Snapdragon 730G’s or 765G’s ISP.  As said it would sport a 64MP + 8 + 2 + 2 quad rear camera. To the front, it will sport a 20MP primary sensor which couples a 2MP secondary sensor.

The Redmi K30 %G sports a 6.67-inch FHD+ IPS LCD punch hole Display with a whooping 120hz screen refresh rate. The device has a screen to body ratio of 91% and in the aspect ratio of 20:9. Underneath, the Redmi K30 5G sports Qualcomm Snapdragon 765G chipset which pairs Adreno 620. The device pairs with 6 and 8GB RAM and 64, 128, and 256GB internal storage variants. The internal storage is further expandable up to 256GB via a microSD card slot.

Talking about optics, the Redmi K30 sports a quad rear camera setup comprising of a 64MP Sony IMX 686 primary sensor coupled with a 5MP macro sensor and a tertiary a 2MP depth sensor and finally an 8MP ultra wide-angle sensor with 120-degree field of view. To the front, the device has a dual-camera setup which is placed in the punch hole to the top-right edge. This dual-camera setup includes a 20MP primary sensor which is coupled with a 2MP depth sensor.