Xiaomi has an impressive smartphone lineup encompassing all segments of phones. Well, as the Android 11 is incoming, Xiaomi is gearing up for the big release that will be based on the latest MIUI 12. There’s a new bit of information available about Android 11 supported smartphones that is Xiaomi Redmi Note 9 Pro Max.

Xiaomi opted for yet another instance of terrible nomenclature with the Redmi Note 9 Pro Max as known in India. On the other hand, it is also called as Redmi Note 9 Pro (global). Note that there’s a Redmi Note 9 Pro in India which is a different phone so we will keep it out of the loop here. 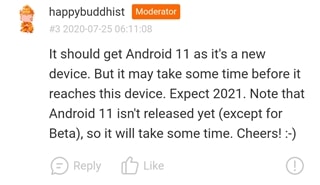 Now that we have ironed out the confusion, talking about the latest update, the Redmi Note 9 Pro Max and global Redmi Note 9 Pro will get Android 11. Both of these phones were released with Android 10-based MIUI 11 a few weeks ago which means these models are imminent to get Android 11. One of the giveaways is the fact that Xiaomi releases at least one major Android update to its Redmi lineup.

Anyways, a mod on Mi Community answered a query from a user where he/she mentioned that the Redmi Note 9 Pro Max (India) and Redmi Note 9 Pro (global) are in line to get MIUI 12 and it is estimated to arrive in 2021. Since Android 11 hasn’t officially released yet and we are still a few weeks away from its launch in September. Considering Xiaomi’s history of rolling out updates, we are certain that the update isn’t that near. It could arrive in Q1 or Q2 2021 although this is just our estimation as there’s no confirmed date available yet. We are still too early to speculate.

You can watch out this space to know more about Android 11. It is available as a beta version on a few Xiaomi phones that you can read here.