The concept of rooting smartphones is now becoming a second nature among various smartphone enthusiasts. Rooting allows the superuser access to the phone, In turn, this allows the user to flash custom ROMs, recoveries and perform many other modifications. Android is an open-source platform with a great scope of customization which broadens with the concept of rooting. We already have a great repository of guides about performing rooting on various smartphones. Adding one more device to that, today we will tell you How to Root EMUI 9.0 on Huawei Honor 10 using Magisk. In this post, we have put up the latest magisk and corresponding TWRP file for Honor 10. We have also mentioned the guide which will help you rooting the device with latest Magisk on Honor 10.

This rooting will be based on EMUI 9.0 featuring the latest Android 9.0 Pie. So, you have to use the TWRP which is meant for Android 9. Keep in mind that for rooting you have to unlock the bootloader and install TWRP. Then via TWRP flash the latest Magisk. It’s fairly a simple process which we have outlined in the guide. 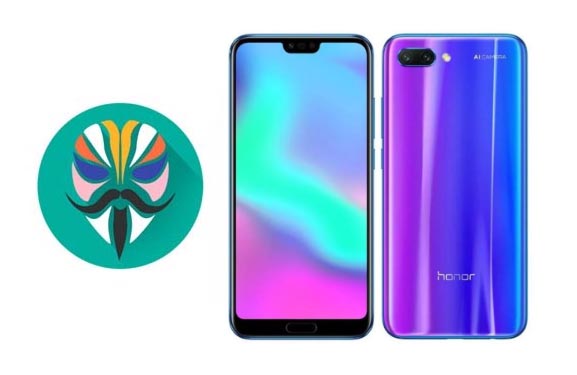 Obviously, when it comes to rooting Magisk is the first choice for enthusiasts. Usually, when you root a device, you don’t get permission to use certain Apps, mostly the banking apps. However, Magisk comes with Magisk hide feature which you can enable and easily use the banking Apps. You won’t even feel for once that your device is rooted. From my personal experience, a rooted device(when rooted with Magisk) works just fine and perfect as it would happen on a non-rooted device. Magisk is continuously developed and maintained by developer topjohnwu of XDA.

How to Root EMUI 9.0 on Huawei Honor 10 using Magisk

Before performing any modification, you have to download the required TWRP files and Magisk zip files. Besides, you have to follow certain other guidelines for your device which we have outlined below.

Basically, there are two processes which we have to perform. First, install the TWRP. This will be followed by flashing the Magisk. let’s look at this in details.

Step-1 Download the required Magisk files and transfer them into the phone’s storage.

Step-2 Move the TWRP image file to the folder where you installed ADB.

Step-3 Switch off your phone. Press Volume down + Power Button to enter the fast boot mode.

Step-4 As you see the fastboot logo, connect the phone with the PC.

Step-6 Now as command prompt opens type the following command to ensure your device is properly connected. The command should return a sera number citing a successful connection.

Step-7 Now its time to unlock the bootloader. this command will wipe away everything. Here it goes.

Step-8 Now you have to flash the TWRP image. Give the following command.

Step-9 Now you’ve to reboot the device. So type the following command.

Step-10 Now Press Volume Up + Power button to boot your device into TWRP.

Step-11 Now in the TWRP menu, Press on Install.

Step-12 Now browse and select the Magisk Zip file from the device > Swipe to confirm flash.

Step-14 Now, the device will boot up with Magisk and Magisk manager.

So, congratulations. Now your Honor 10 is successfully rooted with latest magisk. In case you use banking Apps, you can use Magisk manager > tap on Upper left corner drawer > tap on magisk Hide.  It’s simple as that.

We hope this guide was helpful to you. if you have any queries do let us know. The process is pretty straightforward and simple to perform.