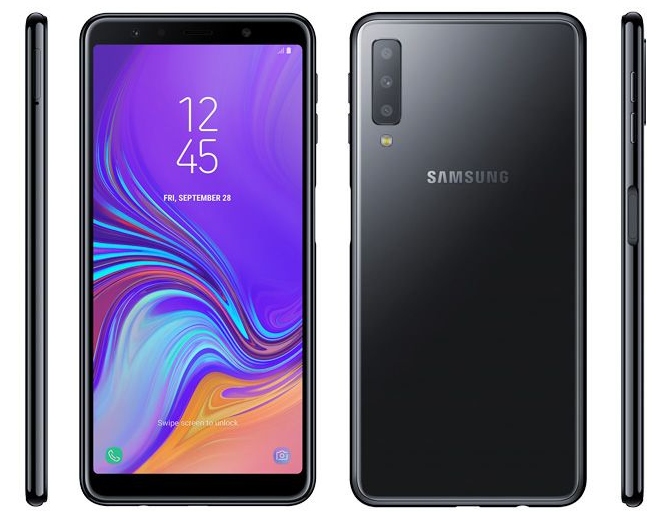 In terms of specifications, Samsung Galaxy A7 2018 smartphone comes with 6-inch Super AMOLED Infinity Display that supports 2220 x 1080 pixels of resolution. The display of the phone also offers 18.5:9 aspect ratio. It powered by Octa-Core CPU under the hood which clocks at 2.2 GHz along with unknown chipset. In the South Korean market, the Galaxy A7 2018 smartphone available with 4 GB of RAM and 64 GB internal storage. The phone comes with micro SD card supports up to 512 GB.

The Galaxy A7 this year comes with triple camera sensors setup on the top-left corner of the back side. There are a 24-megapixel main camera with autofocus and f/1.7 aperture, 8-megapixel ultra-wide camera with f/2.0 aperture and 5-megapixel depth sensor with a fixed focus and f/2.2 aperture. On the front side, there is single 24-megapixel selfie fixed focus camera with f/2.0 aperture for selfies and video calls. The front camera of the phone has a dedicated LED flash. The phone also comes with the company’s intelligent Scene Optimizer that categorizes the subject and adjusts the color, contrast, and brightness to optimize image quality.

The phone runs on Android 8.1 Oreo operating system out of the box along with the company’s own Samsung Experience custom UI running on top. The Galaxy A7 2018 packed with 3,300 mAh capacity battery inside the body. The body dimensions of the phone are 159.8×76.8×7.5 mm and weight is 168 grams. It has a side-mounted fingerprint scanner similar to the recently launched Samsung Galaxy J6+ smartphone.

At the product launching event, DJ Koh, President and CEO of IT & Mobile Communications Division at Samsung Electronics said: “Samsung is committed to delivering meaningful innovation to all consumers across the Galaxy family, no matter who they are or where they are in the world.”

However, the price of the Samsung Galaxy A7 2018 has not been revealed yet. The company said that the phone will available in select European and Asian markets starting this fall. In the near future, the company will launch the phone in other international markets.