Samsung is lately making a lot of hardware-based experimentations with its devices. We are already seeing results in the form of smartphones with tri and quad-camera set-up. Now the Korean OEM is looking forward to drop a smartphone with Qualcomm SD 710 in early 2019. Apparently, the device exists and goes by the model number SM-G8870. Some of the physical details of the Samsung’s first ever Snapdragon 710 SoC phone has revealed online. 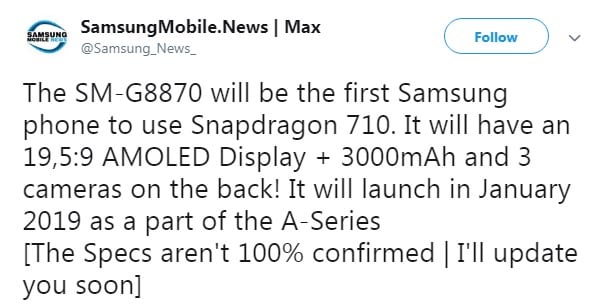 A popular tech channel dedicated to Samsung has shared this on their Twitter handle. According to them, Samsung’s first ever Snapdragon 710 SoC phone will flaunt an AMOLED display with 19.5:9 aspect ratio. So, expect slimmer bezels and a notch above the screen. It will pack a battery of 3000mAh. Most importantly, it will sport a triple-camera set-up on its rear panel. The device may be a successor to the latest Galaxy A7 of 2018 which follows a similar shooting set-up.

This device is aiming for a January 2019 release as a part of the Galaxy A-series smartphone. The triple camera fact pretty much indicates that it may be a successor to the Galaxy A7(2018) model. The triple camera set-up of the 2019 mid-ranger may have a lens combination of 24 MP main camera with an 8 MP, a 13mm ultrawide shooter and a 5 MP depth sensor (24+13+5 MP).

Currently, any other info about the Samsung’s first ever Snapdragon 710 SoC phone is not available. Also, as the specs and details are not from the official source, we suggest you take this info with a grain of salt. When any official information is out, we will update you with the same.