Most of the smartphone makers have already launched their own models with the full-screen, a technology that has become the trendiest feature on smartphones. If there have been left a few manufacturer not come with such a device, be sure you’ll hear about them before the end of the year. But many of those devices look identical to each other. Moreover, they come with a longer front panel. Basically, they sport a 6-inch screen with a screen ratio of 18:9 and use the screen panel packaging process named CoF. However, some of them look different. Among them, we can mention the Samsung Galaxy S8/Plus, Note8, iPhone X, Essential Phone, and Xiaomi Mi MIX 2. Today another phone entered the club. As expected, it comes our way from Smartisan. This brand is mainly known due to the Smartisan Nuts Pro launched earlier this year. It has been a very stylish smartphone sporting a dual-camera, another trendy feature before the full-screen became more demanded. To fill the gap in its arrangement the company announced another full-screen phone dubbed the Smartisan Nuts Pro 2. So we should take a closer look at it. 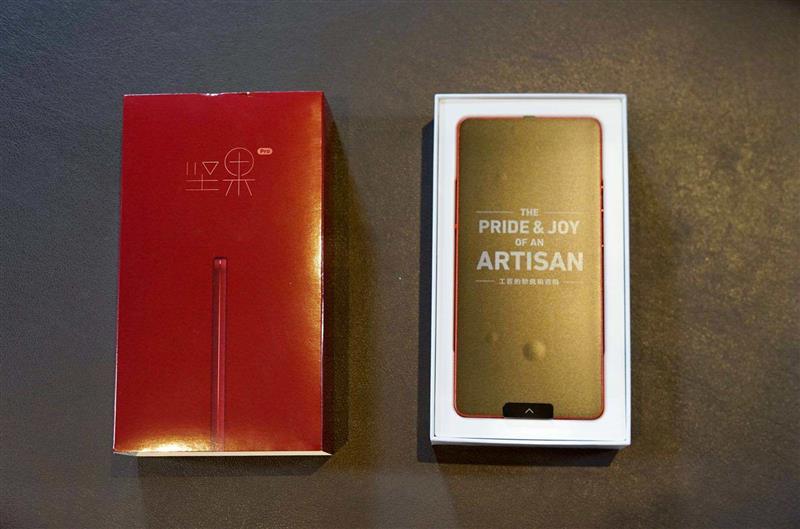 The phone is equipped with a 5.99-inch 18:9 InCell full-screen. It provides great viewing experience at the resolution of 2160×1080 and pixel density of 403ppi. It uses LCD. Thus the Smartisan Nuts Pro 2 avoids the PenTile sub-pixel arrangement found on OLED panels. Moreover, LCD panels provide better performance due to a technology that has been in the market for a long time. The screen is supplied Pegasus. A display from this manufacturer can be found on the Xiaomi Mi 5X, the best super mid-range smartphone in the phone. It offers a typical contrast ratio of 1500: 1, NTSC color gamut coverage of 80%, 500nit brightness, and covered by the third generation of Corning Gorilla Glass. 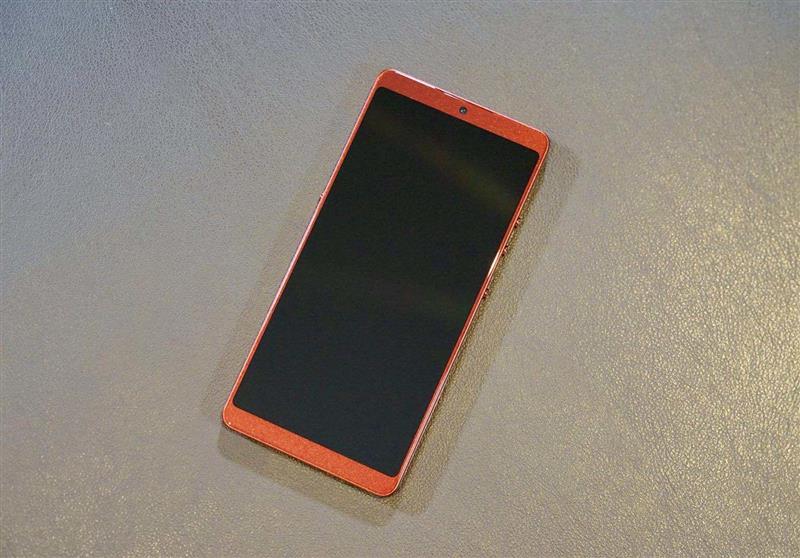 In comparison to a regular 5.5-inch screen with a 16:9 screen ratio, the Smartisan Nuts Pro 2 is almost the same in size with its 5.99-inch screen. But vertically it has 240 pixels more. To solve problems related with this the smartphone makers usually reduce the screen border on the upper and lower sides. They are called ‘forehead’ and ‘chin’. As a result, they offset those 240 pixels. This is the main reason why the second-gen Smartisan Nuts Pro 2 and the original model are almost the same in terms of dimensions.

The phone’s design uses a typical minimalist Roche style. Apart from the display, the Smartisan Nuts Pro 2 comes with an improved forehead. It’s the way narrower. But this doesn’t prevent the company from hiding the speaker and sensors under the glass. Of course, other manufacturers do the same. But they used the black panel for better results. In this sense, the Smartisan Nuts Pro 2’s wine red and white color options showcase how it can be reached these results on other color options. Almost an identical performance can be seen on the Oppo R11s launched a few days ago. At last, it can be seen even on the Xiaomi Mi MIX 2 and Sony Xperia Z3 Plus. This simply means the build quality of this handset is at the level of top brands. 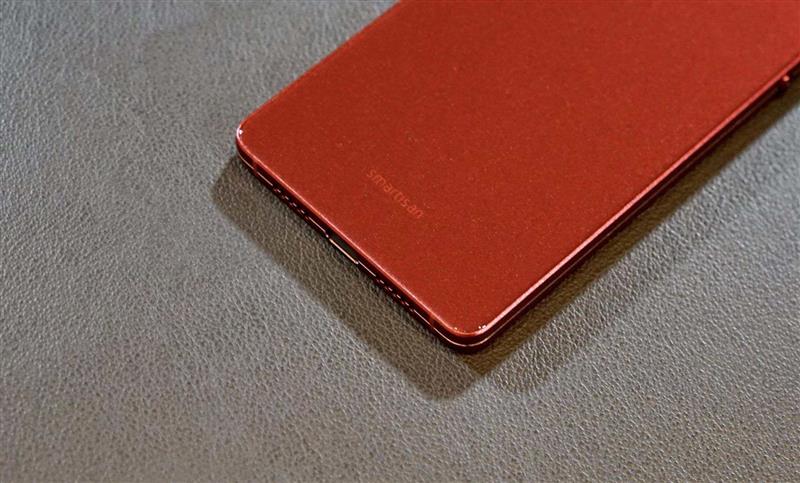 The frame is made of an aluminum alloy. Its surface has passed through the metal blasting process, while CNC crafting is used for both edges. Seems nothing special, but the company has gone further and used CNC cut to make a groove in the middle of the frame. The groove is shallow and thanks to a secondary anodizing have got a gold coloring. That’s why it seems the frame has cut into two parts. It doesn’t affect the phone’s durability at all. But thanks to it the phone looks the way thinner at its 7.4mm thickness. 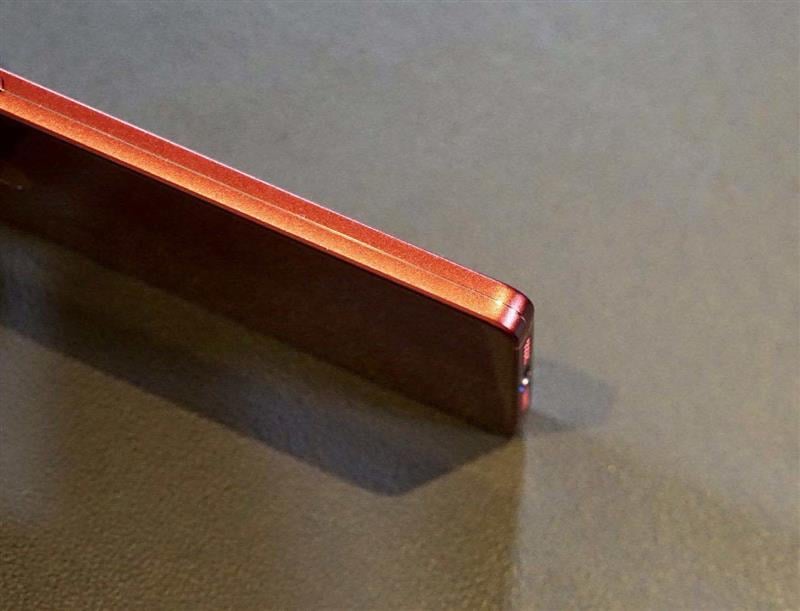 The Smartisan Nuts Pro has been officially described as ‘sharp and cogent in the era of sleek phones’. In some sense, this is quite true. But the ergonomics of this phone has been always one of the most controversial features of the first-gen model. As for the Nuts Pro 2, though the overall look remains the same, the company has done too many improvements on the grip. The frame is now more rounded and it uses a 2.5D arc glass on front and rear, while it was just a 2D on the previous model. 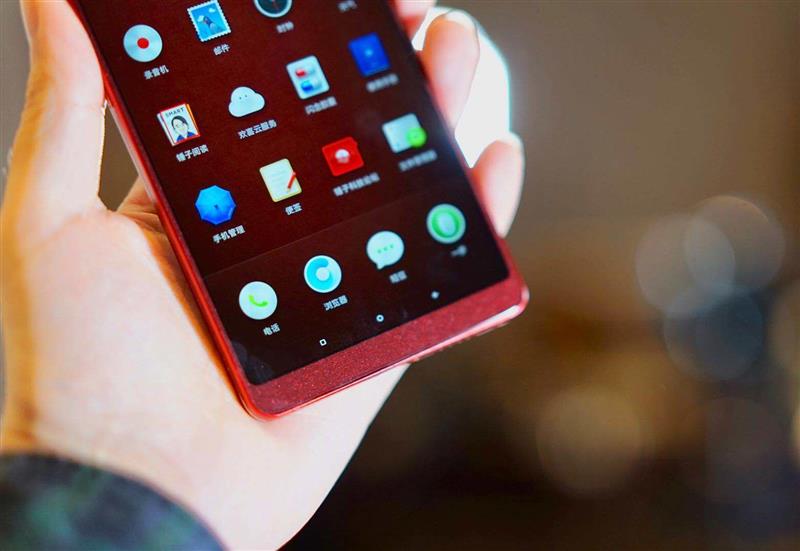 Fingerprint scanner hidden under the logo and Facial Recognition via Face++

Though this handset still uses a post-fingerprint identification because of the full-screen, it is now hidden under the logo. This scanner can be used for fingerprint payments. That’s kind of a one-shot deal. However, this is not the only security option on this handset. The phone also incorporates facial face recognition based on the front-facing camera. It uses the well-known Face++ algorithm that provides an ideal speed when using the facial recognition feature. It’s used on the Xiaomi Mi Note 3 and Vivo X20. The Face++ is a Chinese startup valued at roughly a billion dollars. But like many other facial recognition software, except Apple Face ID, still doesn’t provide an acceptable security. 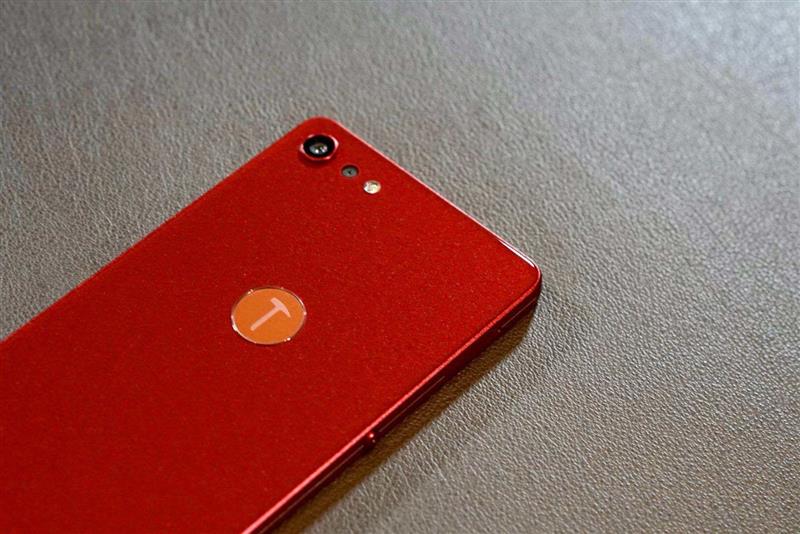 Agree the buttons on a phone are used countless times per day. But none of us pays attention to them. Fortunately, Smartisan does. It has done something different on the keystrokes. First, it has changed the key design. They are round with some concavity. Something like that can be seen on the Sony Xperia Z models. Plus, Smartisan has added corresponding grooves for each of them. 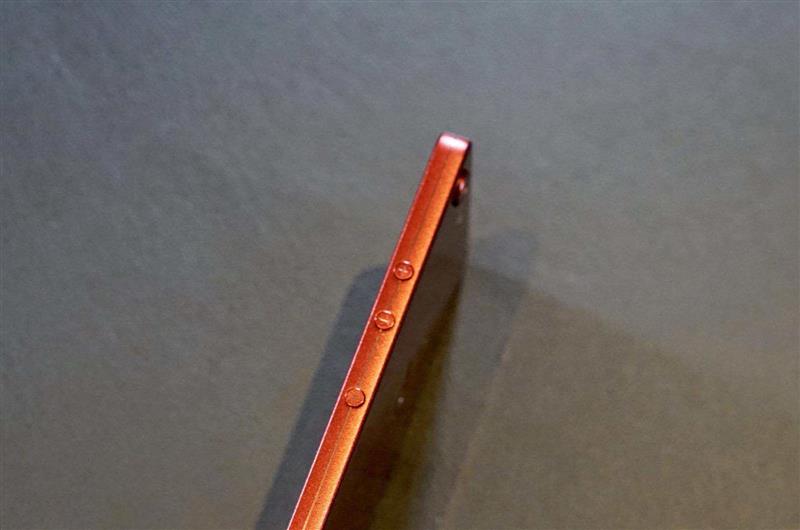 On the left side, the company has put a dedicated flash memory capsule function key. It substitutes the most practical long press feature on the Home key. However, you can change its function in settings. 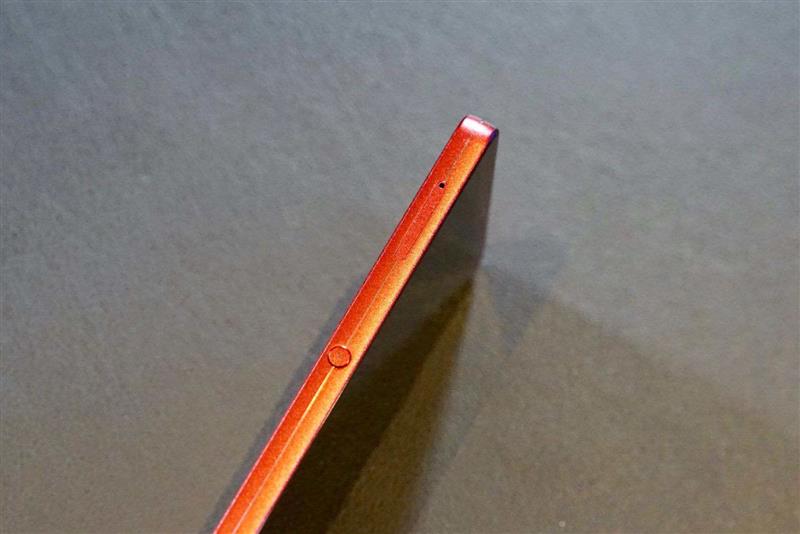 There are a few color options – carbon black, wine red, and light gold. However, it depends on the specific memory and storage capacity options.

The original Nuts Pro came with a dual-camera. And though it was packed with two 13MP sensors, the overall shooting experience was unsatisfactory. The second-gen model features an identical camera. But the company has replaced the black/white dual-camera program. Now it uses a Sony IMX386 sensor with a single pixel size of 1.25 microns and 6P lens. This sensor comes with a higher CMOS rate and an aperture of f/1.8. However, there is no optical image stabilization for this model. The large sensor is paired with a Samsung S5K4E8 sensor of 5MP with a pixel size of 1.4 microns. It doesn’t take a part in the imaging process. It only provides the bokeh effect. Plus, the camera comes with a flashlight that uses an integrated RGBW sensor. The company has changed the sequence of the sensors and the flashlight. Now they come with a descending order. 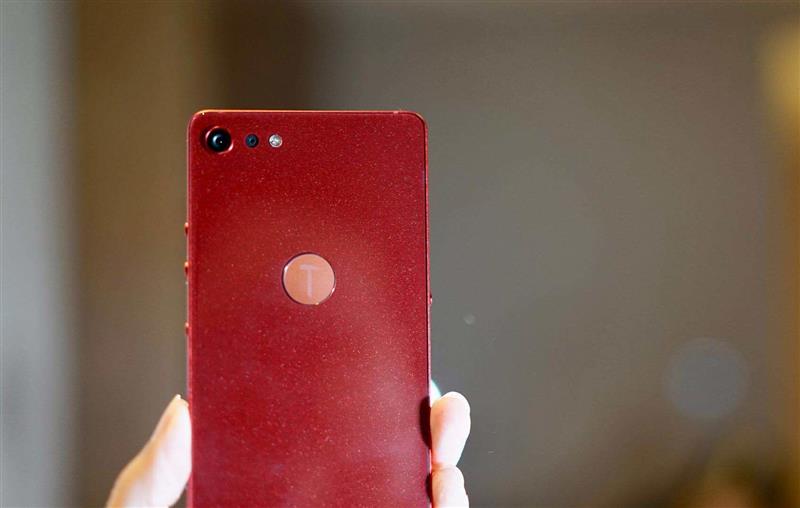 The Smartisan Nuts Pro 2’s camera provides the way better shooting experience than its predecessor. But it can’t be a true dual-camera phone and be compared with the beasts such as the Xiaomi Mi Note 3. However, the Snapdragon 660 chip with its stronger ISP and ArcSoft algorithm synthesizes the way faster than the Nuts Pro with its bi-shot system and provides a multi-frame noise reduction.

The front camera uses a 16MP sensor with an aperture of f/2.2. Plus, it supports the beautifying feature found on almost all Chinese selfie-centric smartphones. The Nuts Pro 2 uses a beautify algorithm by Momo, claiming it learns from the millions of beautiful anchors. 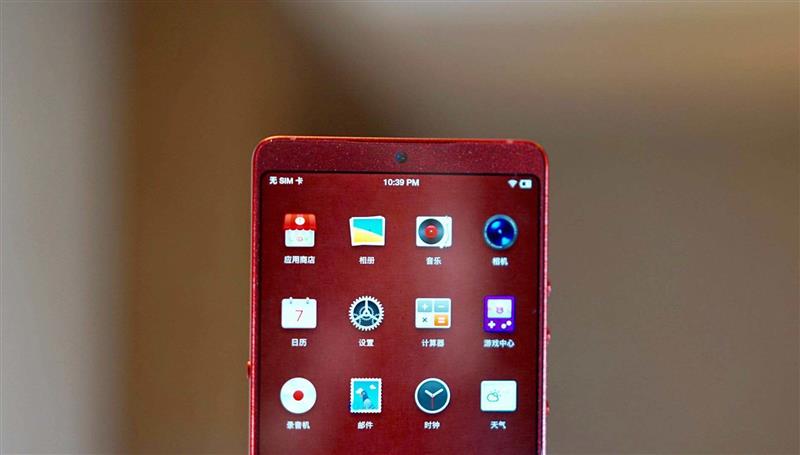 The Smartisan Nuts Pro 2 sports a Snapdragon 660 chip, which uses a new Kryo independent architecture. To understand what a SoC we are talking about, just imagine it can be found on the best super mid-range devices such as the Oppo R11/R11s, Xiaomi Mi Note 3, and Vivo X20. Now it appears on the Smartisan phone. The SND660 is the most powerful 6-Series chip of Qualcomm currently. It provides a performance identical to the Snapdragon 820/821 but with lower power consumption. Moreover, this is one of the most eye-catching improvements made in comparison to the original Nuts Pro’s Snapdragon 625 chip. Thanks to the chip the Smartisan Nuts Pro 2 is great when playing heavy games. Say, it supports King of Glory at the highest frame rate.

In terms of the battery, nothing changed. It still comes with a 3500mAh battery supporting Quick Charge 3.0 with 18W. Moreover, the handset comes with a USB Type-C, which is a better option for data transfer as well as charging. As you can guess, there is no 3.5mm audio jack. So you have to acquire an adapter to listen to music via your regular headsets. But you can also do it via Bluetooth connectivity. This phone supports Bluetooth 5.0 and NFC (not all versions). Other connectivity options include a dual-band 802.11ac Wi-Fi, GPS / GLONASS, card reader, write cards, card simulations, P2P mode, and dual-card dual-standby supporting 4G. 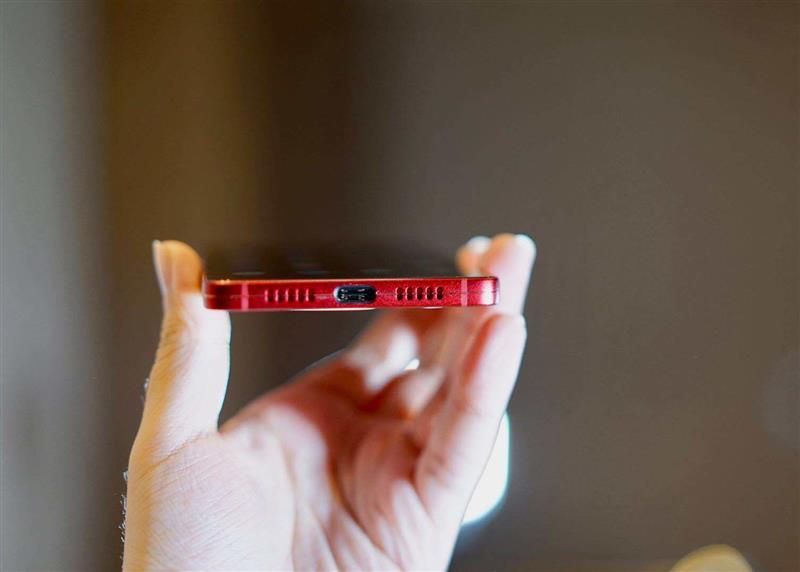 The phone has been unveiled with five storage options. Though all memory and storage variants come with LPDDR4 + eMMC 5.1 combinations, they all differ in terms of capacity. Therefore, they are priced differently.

(Both models are available in three color options)

(Both models are available in black and wine red). 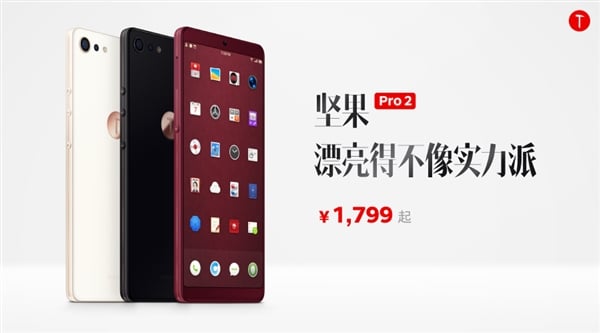 To describe the Smartisan Nuts Pro 2 with one word we can say it’s different. The manufacturer has really made a different full-screen handset. It differs by its design, colors, approaches, hardware, camera, and the rest of features. It’s also priced logically. So we can state the 2000-yuan variant can be considered to be one of the most affordable full-screen phones with a good hardware and design.