Mobile World Congress (MWC) is a show where most of the brands show their innovations which will be coming in their flagships. Vivo has already started sending out invites for their upcoming APEX smartphone. Sony is a brand which now least exists in the smartphone industry. However, the smartphone lineup gets some announcements every year. Till date, the brand didn’t unveil what they will bring with Xperia 2020 smartphones. But now Sony; the Japanese giant, also starts sending out invites for MWC 2020. 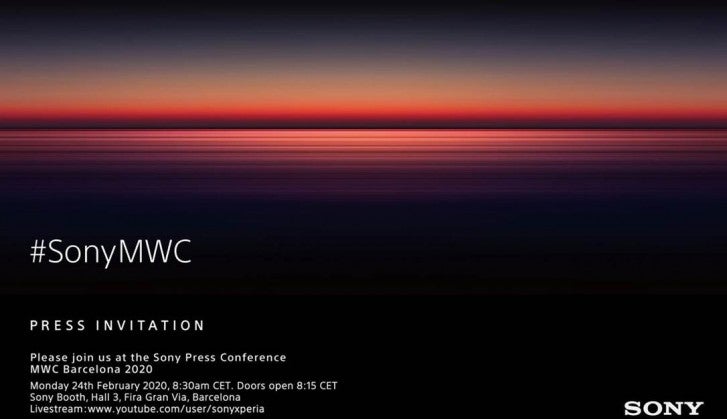 The invite which was sent by the company is for the press conference on Monday, 24th of February, 2020. The event will take place at Sony’s Booth in Hall 3, Fira Gran Via, Barcelona. The event will kick off at 8.30 AM CET. Sony also adds that they will live stream the event through their Sony Experia Official Youtube Channel.

We expect Sony to announce their new flagship device. Reports suggest that the new flagship phone will name as either Xperia 3 or Xperia 5 Plus. Additionally with this flagship, there will be a mid-ranger that would sport the Qualcomm Snapdragon 765G. There are no reports, that the Xperia 10 and Xperia 10 Plus will get successors or not. Apart from the rumor which came last month about Xperia 3, there is no evidence that the brand will launch it. For now, we know that the company will be launching two new smartphones in the coming months. Since the brand is simplifying its smartphone lineup, it tells us that there will be a flagship device and a mid-range smartphone.

According to rumors, the Xperia 5 Plus will reportedly sport a 6.6-inch display along with a tall 21:9 aspect ratio. Qualcomm’s Latest Snapdragon 865 will power the device. The device will also sport tripe rear cameras, front-facing stereo speakers and side-mounted fingerprint scanner.

This year i.e. “2020” is an important year for Sony, because its biggest product launch for the year 2020 will be the upcoming Play Station 5 game console. Apart from the camera division, the gaming division is another successful area of Sony. We don’t know that Sony will bring back their smartphone section to proud as earlier. Anyway we are waiting for MWC 2020 to get things official. More smartphone brands will announce their MWC presence soon.