Today, a Japanese smartphone company holding on product launch event at the IFA 2018 event. Sony holding a press conference at 1 PM local time to unveil the Xperia smartphones. The company expected to announce the Sony Xperia XZ3 flagship smartphone along with Sony Xperia XA3 mid-range smartphone. Now fresh press renders of the Xperia XZ3 leaked online ahead of its launch event along with specs and color models. The images shared by a well known Roland Quandt tipster.

According to the tipster, Sony Xperia XZ3 will feature with 6-inch P-OLED display that supports 2880 x 1440 pixels of resolution. The display of the phone manufactured by LG and will come with a notch less design and offers 18:9 aspect ratio. The Xperia XZ3 has a bezel-less design on sides and the top and bottom of the display have wider.  It will power by the Octa-Core Qualcomm Snapdragon 845 processor under the hood. The leaked images reveal that the phone will available in many color options, Black, Silver White, Bordeaux Red and Forest Green. 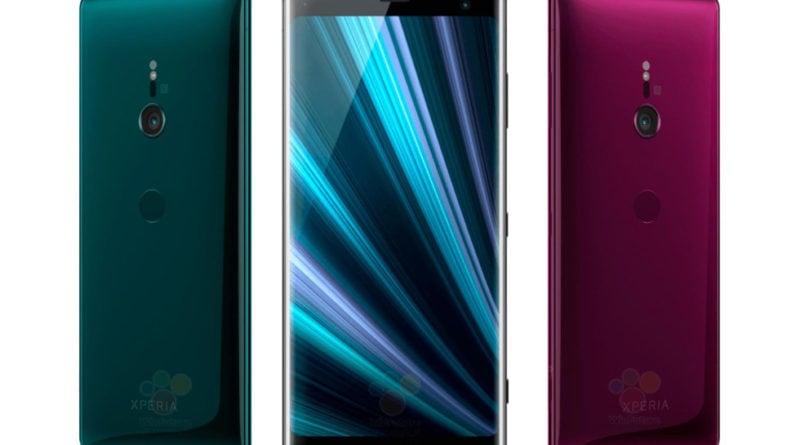 The Xperia XZ3 has 4 GB of RAM on board and UFS 2.1 storage of 64 GB internal storage. It will pack with 3.300 mAh capacity battery inside which supports fast charging charger feature. The phone may be the first smartphone that runs on Android 9.0 Pie operating system out of the box. Previous rumors claimed that the phone will have dual camera sensors on the back side, but fresh leak revealed that it has a single camera sensor on the back side. The phone has 19-megapixel rear camera and the phone has a dedicated hardware button to launch the camera. On the front side, it will come with a 13-megapixel camera for selfies and video calls.