Sony is working on its upcoming flagship smartphone called Xperia XZ3 which is expected to unveil at the IFA 2018 event on August last week. There are speculations that the Sony’s upcoming flagship smartphone will have a similar design to the Xperia XZ2 launched starting this year. According to the first rumor about the Sony Xperia XZ3 that suggested that the phone will come with dual camera sensors on the back side. Recently, the 360-degree render leaked that missing the secondary camera on the back side. However, a benchmark listing reveals that the Xperia XZ3 will come with an advanced single sensor on the back side instead of dual. 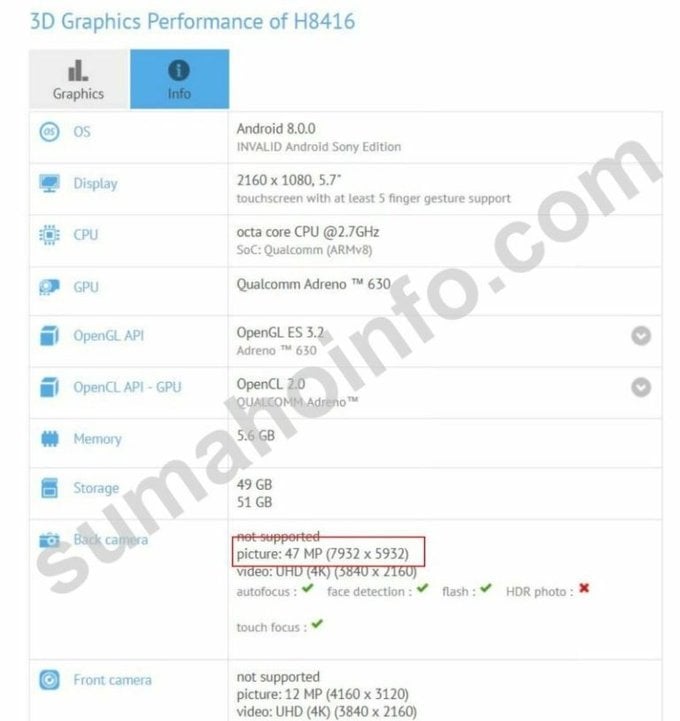 On the GFXBench, Sony phone appeared with an H8416 model number and reveals key specs of the phone. According to the GFXBench, the phone running on Android 8.0 Oreo operating system. It has a 5.7-inch display that supports 2160 x 1080 pixels of resolution and at least 5 fingerprint gesture support. The Xperia XZ3 screen will offer 18:9 aspect ratio. The phone powered by Octa-Core CPU under the hood which clocks 2.7 GHz along with Adreno 630 GPU. There IT expected to come with Qualcomm Snapdragon 845 chipset.