OnePlus 6T has made a great impression in the US after it teamed up with tele-carrier T-Mobile post its release. Currently, a new software update based on Android 9.0 Pie is rolling out from the carrier with software version A6013_34_190217. It introduces the IR94 video calling feature. IR94 is also known as ViLTE (Video over LTE).  The device is also getting the January 2019 security patch and the RCS Messaging support. RCS means Rich Communication Services. It is a new generation protocol which will replace the generic and old school SMS with new features. 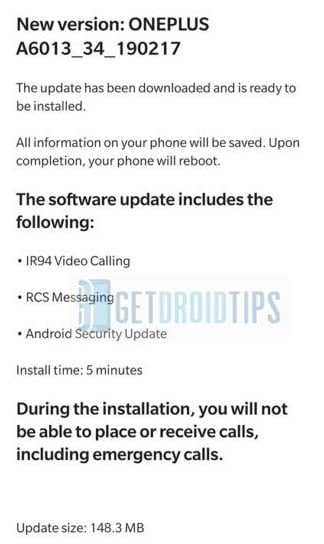 Though OnePlus is pushing out new features it has stepped back on the security patches. The T-Mobile variant is on the same boat as the unlock 6T with January security patch. We hope to see the latest security patch in the next iteration of the software. The latest A6013_34_190217 update is rolling over-the-air and will gradually find its way into the devices. It weighs around 148.3 MB.

Usually, the software should be available on your device on its own. then after you see the prompt all you need to do is download and install it. However, OTAs always seed with uncertainty. This means, in case the new update is delaying to show up, you can search for it manually.

Go to device Settings –> System Updates–>Tap on Software updates > tap on Check for updates. You may see the new update with changelog. It will prompt you to Download and Install. Use a Wi-Fi network to save carrier charges while you download the OTA. Be sure to juice up the battery of your device before installing the new update for T-Mobile OnePlus 6T.

So, guys.! If you use the OnePlus 6T from T-Mobile, then don’t miss this important update. Install and enjoy.