Ulefone is known for its ultra-budget smartphones. But this manufacturer is a master of making replicas of various top brand devices. One of its latest models has been launched to make competition to other cheap Chinese brands specializing in full-screen handsets. As you know, they are divided into two groups. The first of them copy the Xiaomi Mi MIX design, while the second group of manufacturers tries to make their devices look like the Samsung Galaxy S8. The Ulefone S8 Pro belongs to the second group. As the name suggests, its selling point should be the Galaxy S8-like appearance. But regardless the price tag of a smartphone, customers require an acceptable performance. The S8 Pro can’t boast of powerful hardware. But the performance it provides it equal or higher the industry standard. Before we start reviewing this phones, you should get acquainted with the price tag it comes at. The Ulefone S8 Pro is available for only $82.99 that means you can get your hands on a stylish full-screen phone for less than $100. 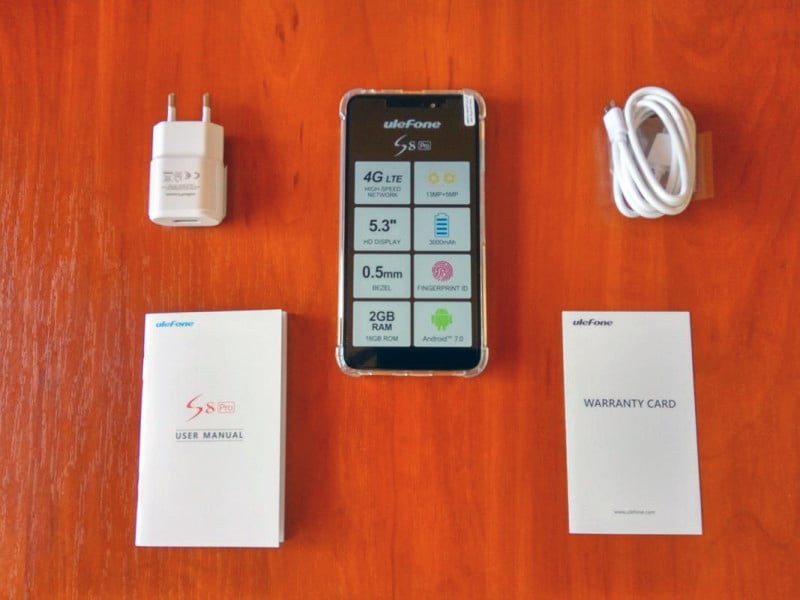 Though we are dealing with a full-screen phone with quite narrow bezels, the Ulefone S8 Pro differs by its screen size from others. As you know, almost all current flagships sport either 5.99-inch (6.01-inch) or 5.7-inch displays. But they are not comfortable for single-hand operations if you have small hands. Though the manufacturers claim they come with the same dimensions as non-full-screen models with smaller displays, they are still big. In this sense, the Ulefone S8 Pro shouldn’t worry about the thing. It sports a 5.3-inch OGS display with a resolution of 1280 x 720 pixels and 277ppi pixel density. The truth is this screen doesn’t come with the best specs, but it provides great viewing experience due to the technology it uses. 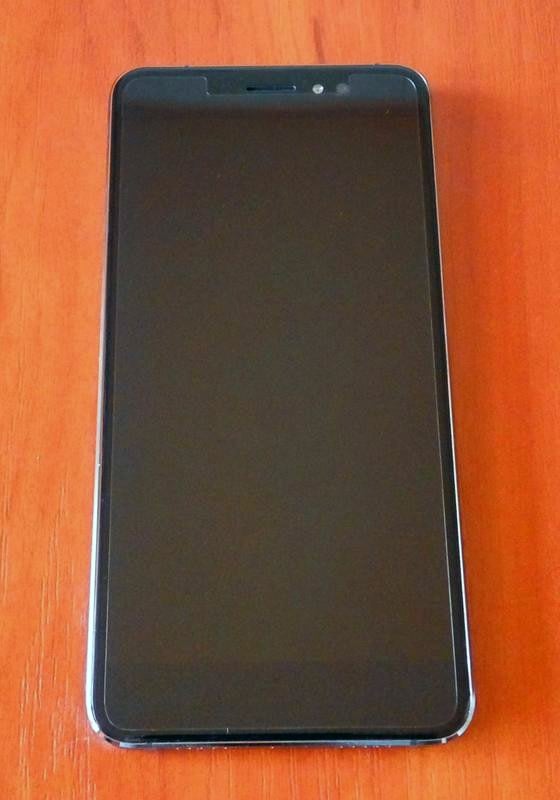 The One Glass Solution (OGS) is a popular touchscreen technology that reduces the thickness of a display by removing one glass layer. So the touch module glass is placed directly under the front glass. As a result, the display becomes lighter and provides better viewing performance. The images seem to be just right on your front.

However, the company didn’t remove the forehead and chin. They look almost identical in size. But the truth is the forehead is 12mm, while the chin is 14mm. thanks to the border-less design and full-screen technology the Ulefone S8 Pro comes with the same dimensions as a 5-inch phone. It comes with 14.60 x 7.20 x 0.92 cm. The latter means it is a bit bulkier than expected. But the manufacturer has solved this problem by adding a 2.5D arc glass to the front and curved the back for better ergonomics.

The frame is made of metal. This means this is a solid phone with a great build quality. But metal frames have advantages as well as disadvantages. Say, when it will get colder in winter and warmer in summer or when using it heavily. This makes some inconvenience. But on the other hand, the frame works as a heat sink. Anyway, the back panel is made of a plastic with a matte texture (soft touch). But there should be some oleophobic coating because no fingerprint is left. The back panel is removable that also means the battery is replicable as well. Many do not like replaceable plastic covers thinking it’s outdated. But if the build quality is at a higher level, it won’t be a problem at all. 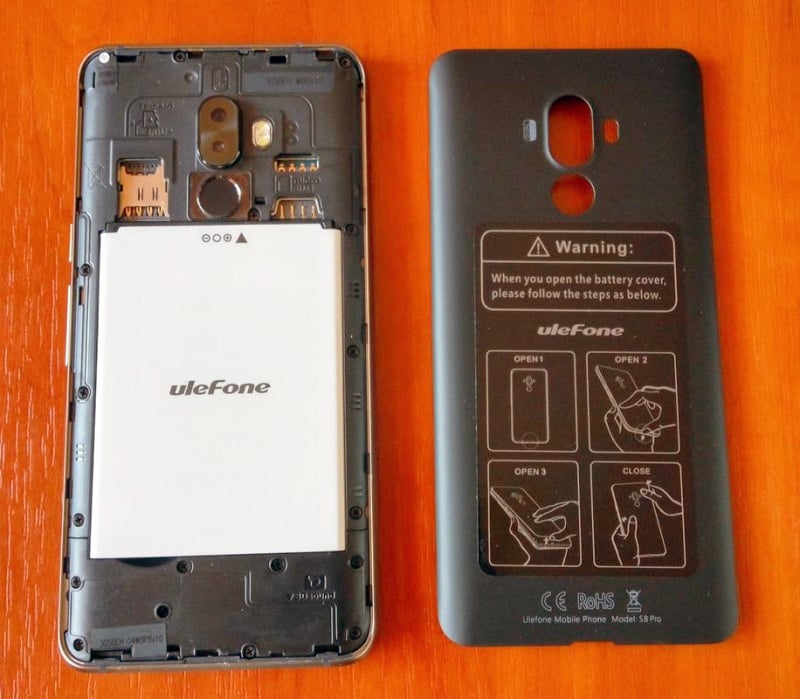 As for holes, interfaces, sensors, and other openings, the front camera and a standard set of sensors are placed above the screen. The chin is blank. It’s been added only to provide a symmetrical design.

The bottom side carries to dot-grills. But only the left-located grill hides a speaker. This means the Ulefone S8 Pro provides an acceptable audio performance, but it isn’t the best thing we have ever seen. There is also a microphone hole for noise cancellation.

The volume rocker and the power key are on the right.

The micro USB port supporting OTG and a 3.5mm audio jack are on the top. 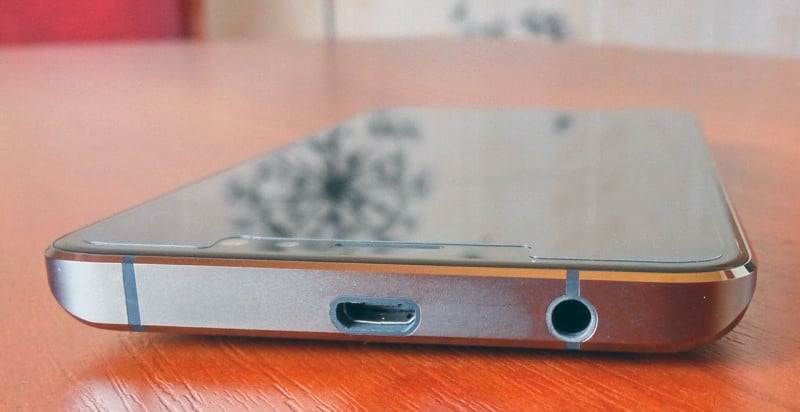 The back panel is more interesting. It carries a dual-camera module paired with a dual-LED flash. There is also a fingerprint scanner placed under the camera. 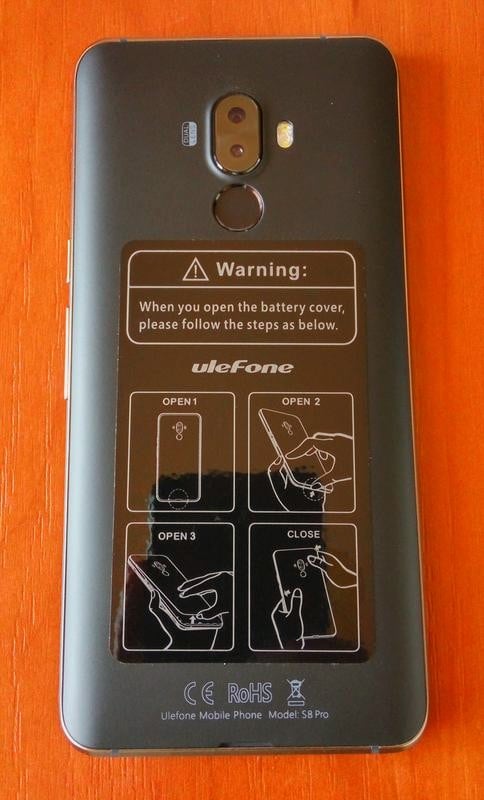 A small slit on the lowest side allows us to remove the back panel. Under it, we can see two SIM card slots. But what’s interesting, you can expand the memory via an SD card slot placed above one of those slots. 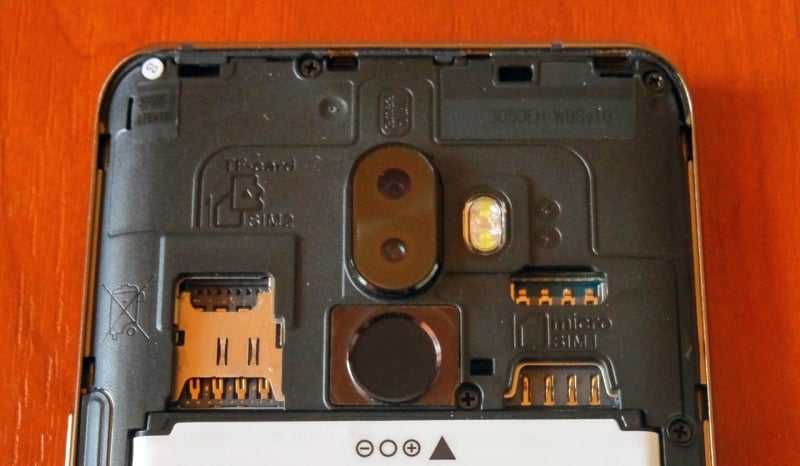 The chip found under the hood doesn’t let us hope for the best. This doesn’t mean we are dealing with a worthless processor. It’s common for such models. But we have already seen the MediaTek MT6737 quad-core chip on other wallet-friendly models, and it showed low-end performance. The Ulefone S8 Pro also comes with a 2GB of RAM and 16GB of ROM making it an ordinary entry-level smartphone.

The phone scores about 30K at AnTuTu. 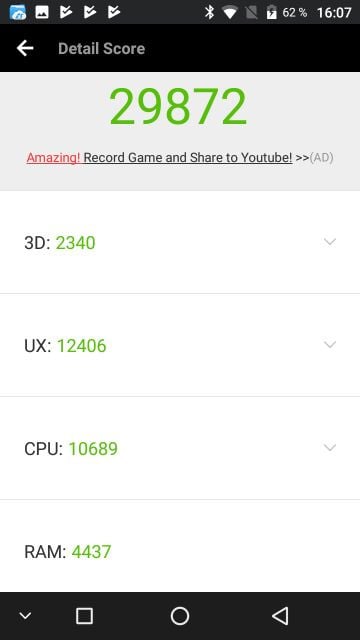 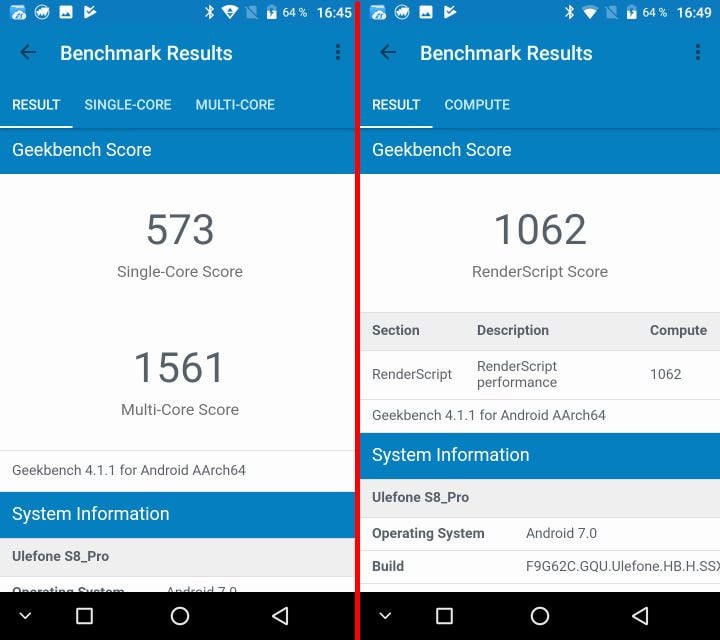 The MediaTek MT6737 is the company’s most cost-effective R.9 Cat-4 LTE chip. But it supports IMS that allows for rich network features such as VoLTE, ViLTE, VoWiFi, and RCS. So the Ulefone S8 Pro can support 4G worldwide. As for the performance, its quad-core 64bit CPU is based on the ARM Cortex-A53 architecture and paired with the Mali T720 MP GPU. Thanks to them it delivers sufficient performance for the top Android apps as well as popular 3D games. The chip is also compatible with MediaTek PumpExpress 2.0, our technology. But the Ulefone S8 Pro comes with a 3000mAh battery and a 5V/2A charging head that bring a regular charging speed. 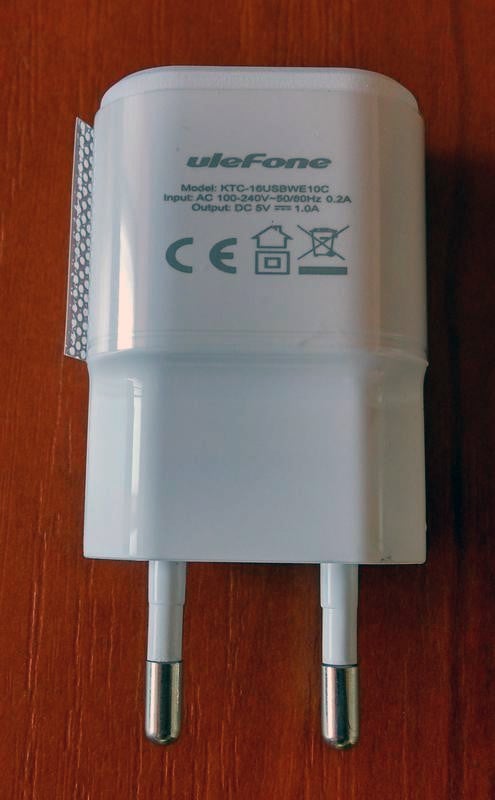 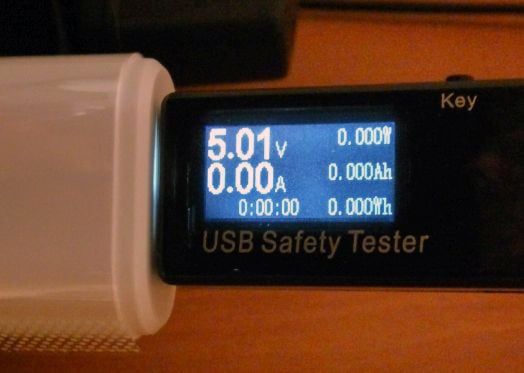 The device comes with Android 7.0 Nougat out of the box. Though there have been made some customizations, we can write down this is a pure Android. Not many design changes have been implemented. But the Ulefone S8 Pro has got all the goodies coming our way from the seventh version of Google’s mobile OS. 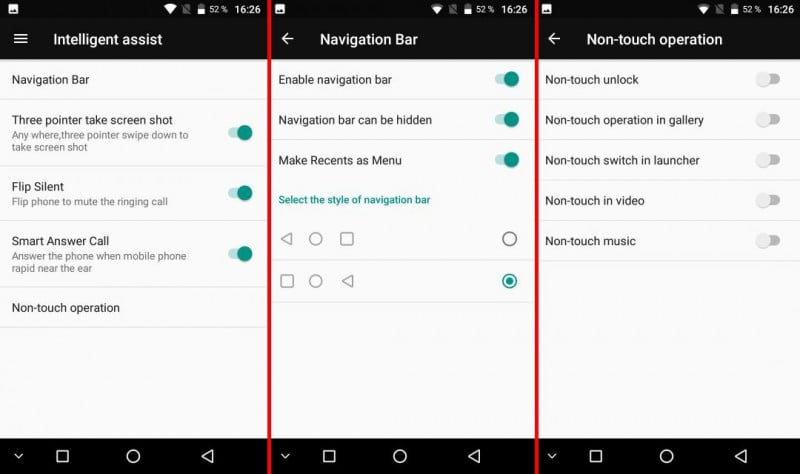 This phone still uses the dual-camera feature that has become popular last year. There is one 13MP main sensor responsible for taking images, and a 5MP secondary camera mainly for providing a bokeh effect. The latter means the focused object is brought to the front layer, while the background is blurred. This is one of the most beloved features any camera can provide. However, let’s be honest, the Ulefone S8 Pro’s dual-camera is a regular camera capable of taking regular photos. A quick look at its aperture of f/2.2 explores everything about it. The only good feature in it is the dual-LED flash. Thanks to it the phone takes good photos even in low-light conditions. At last, there is another 5MP camera on the front. 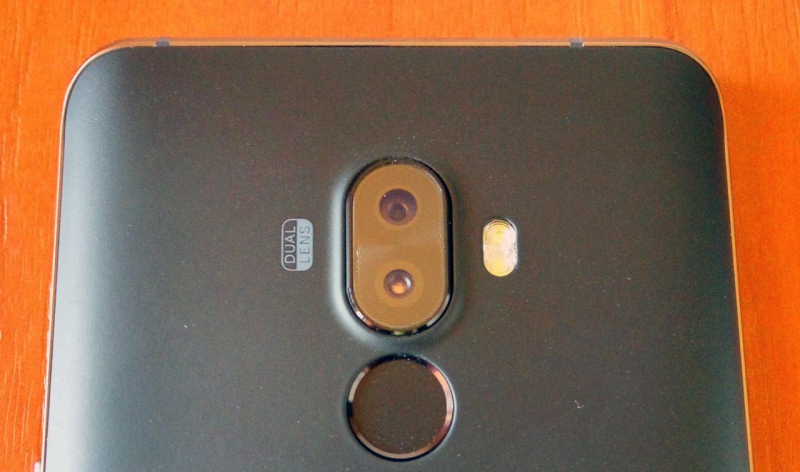 So what we can say about the Ulefone S8 Pro. It’s the same Ulefone S8 with a slightly improved memory options. As you remember, this model comes with a 1GB of RAM and 8GB of ROM. The next difference in comparison to the lighter model refers to the display technology. The regular variant uses an In-cell matrix, which is can be found on many budget devices. The rest is assumed to remain the same. Moreover, the pricing is almost the same. The regular model is available for $77.86, while the Pro variant is priced about $83. So the Ulefone S8 Pro can be recommended mainly to those customers who want to acquire a full-screen smartphone, but do not want to pay a fortune for it. Plus, you are not a heavy smartphone user, the performance provided by this handset will be quite satisfactory.