Resident Evil 3 is a survival horror game developed and published by Capcom. The storyline follows Jill Valentine and Carlos Oliveira as they attempt to survive a zombie apocalypse while hunted by the intelligent bioweapon Nemesis. The remake of Resident Evil 3: Nemesis (1999) was released on April 3, 2020, for Microsoft Windows, PlayStation 4, and Xbox One. It has, as well, an online multiplayer mode, Resident Evil: Resistance. The game is extremely popular and known for receiving generally favorable reviews from critics praising its graphics, presentation, and gameplay receiving a commendation. However, the criticism was directed towards the game’s short length and pace.

The outfit is an important aspect of the game to look at. At this time of its release, we can confirm that players only have access to 3 costumes. However, 2 of the 3 costumes are only pre-order bonuses. So purchasing the game after its release will not grant you access to those two outfits. The outfits choices, as of now, are available to both the heroes of the game. You can learn more about unlocking the infinite ammo here. So before we divert much, let’s see how to unlock all outfits in Resident Evil 3 Remake.

The list below shows all of the outfits available in Resident Evil 3: Remake and what you need to do to unlock them. Both of the characters, Jill and Carlos, have default skins as the game starts. But with the customizable outfits, you can change the default outfit to something prettier or unique. However, like we already said, some of these outfits are exclusive for those that pre-ordered the game, and one of the outfits can be, fortunately, accessed by playing the game. 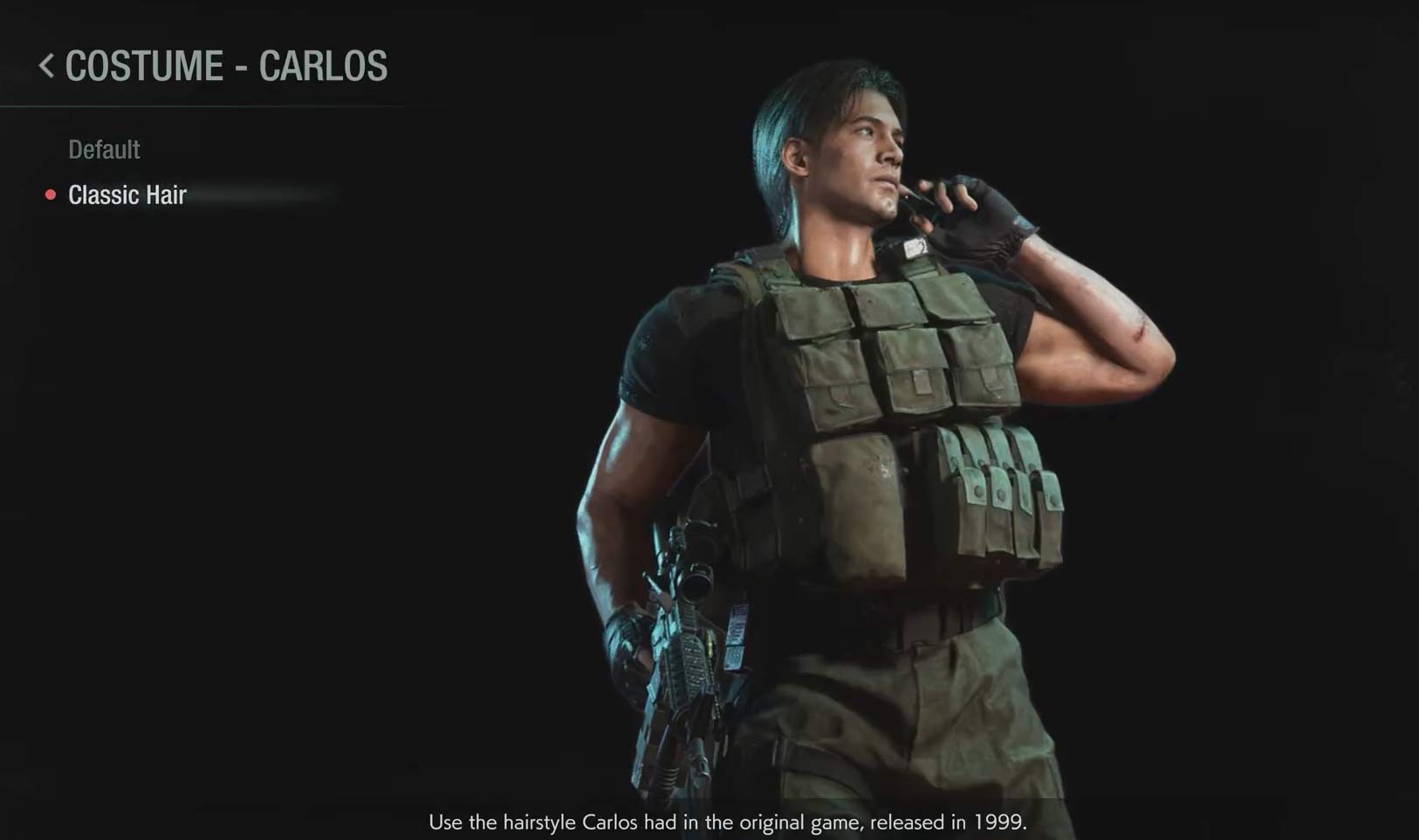 This outfit only alters the hair of Carlos Oliveira. Altering the default messy hair of Carlos, the Classic Hair will help you replace it with a much less of a messy look, and slicked long hair in the back. Choosing this outfit will change Carlos’ hair, but everything else about him will remain exactly the same.

This outfit is a pre-order exclusive item. So at this point in time, only players with a pre-order of the game can access it. However, we still assume that it may potentially become available in the in-game store in the future. 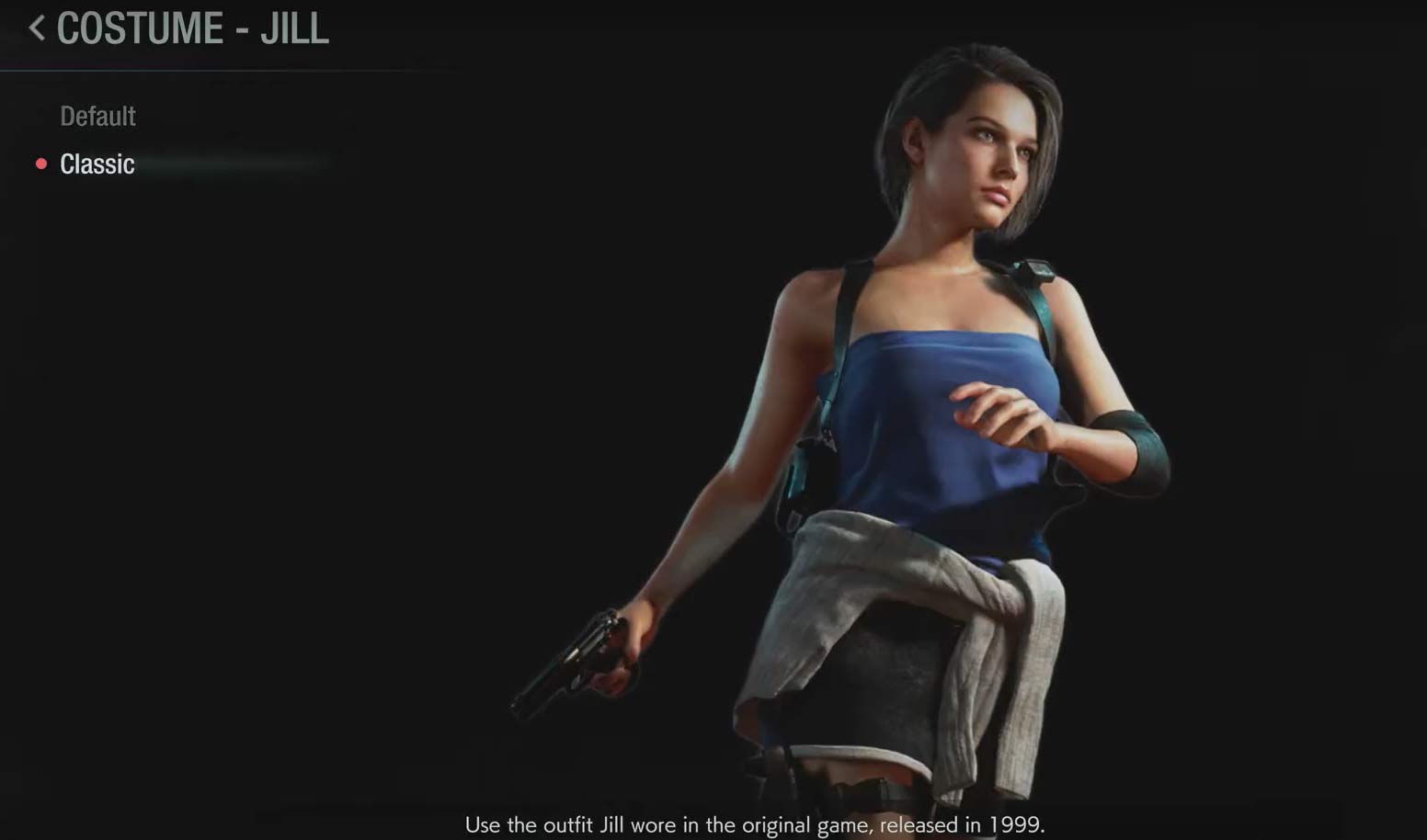 This one is as well a pre-order bonus. The Classic Outfit for Jill Valentine will give you back that nostalgic feel, giving Jill the outfit she wore back in the original version of Resident Evil 3, released back in 1999 named Resident Evil 3: Nemesis. The classic outfit costume comes with a hoodie wrapped around her waist, exactly like in Nemesis.

This is available for everyone, meaning that it is accessible from the store in the game’s main menu. However, you still have to unlock the store in order to access it. You can unlock the store by playing through and completing Resident Evil 3 Remake once on any difficulty. After you complete the game at least once, you will gain access to the store. You can find this costume as an available purchase for 2,000 points. You earn points by completing challenges done through the game, and by going through the game once, usually, you should have enough to unlock this outfit.

Summing up the guide, it might be quite disappointing that the 2 costumes of the 3 available are pre-order bonuses. However, you can still buy the S.T.A.R.S Gear from the game for Jill Valentine, which seems to be a pretty good deal. As we are writing this guide, we assume the creator will add more costumes to the store. But as of now, the players are not left with a much wide range of choices.