Overheating problem is something common in smartphones as eloquent and powerful as Apple iPhone XS Max. There are plenty of reasons why and how a phone could overheat such as overuse, abnormal behavior of apps or just too many apps onboard and accessing a limited set of resources concurrently and thus, crashing the system or producing enough heat to raise the core temperature of the device to a critical level and so on. Even issues with the battery such as a faulty or damaged battery or just aggressively used battery power can induce an overheating problem as well. But here, the thing is, you started observing overheating problem after installing a new update. Note that this isn’t new and thus, a viable thing and has happened from time to time.

This the problem was triggered right after the update, your search for the cause is right in the corner since you know that it all started after the update and thus, there must be something either with the update or something after the update that went down. We at GetDroidTips received hundreds of requests on solving problems and fixes and iPhone XS max suddenly overheats after installing new update made it to the list as well, so here’s a detailed troubleshooting guide that you must read. 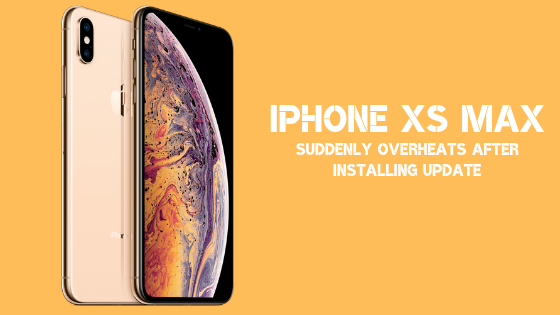 How to fix your Apple iPhone XS Max that suddenly overheats after installing new update?

Solution #1: Turn off the phone and give it a rest

This is, of course, a common maneuver to get rid of the issue that states ‘iPhone XS Max that suddenly overheats after installing new update’. Here, I am exclusively asking you to shut down the phone so that all the apps and processes are down abruptly. Now, you need to keep the phone shut down for a minute or two. This will eventually fix the temporary software glitch or issues with the new firmware that you recently downloaded and so on an even if the firmware is not the problem but the phone somehow ended getting overheat, you need a quick reboot to curb it. After waiting for a minute or two, press and hold the power button to turn on your iPhone XS Max and keep a tab if the problem pops up again or not.

Solution #2: Manage all the unwanted and rogue apps on your iPhone XS Max

Irrespective of what opinion do people have, apps make life easier as they help do stuff which wasn’t earlier possible without being physically present at a spot such as a video call wasn’t possible a few years ago as you would need to be physically present or you can resort to a voice call. You can do a million-dollar bid on stocks or create the best of images with an app and that’s all on your phone so hands-down apps are amazing but the endpoint here is, not all apps are great.

With the gist of it, some apps are not good at all while some apps might not be good for your iPhone XS Max which means you should keep a distance from all these apps. It isn’t rocketing science to decipher these apps from usual working apps since you need to keep this in mind that only install apps that you use and are useful and not those which are not that useful or used at all. I am an avid phone user and you will find tons of apps on my phone of which many of the apps are simply lying around unused. These apps are dormant and thus, lying idle while taking the storage and a few other resources. Then come to some apps that use background activities to drain your battery. Some apps might behave abnormally if there are too many apps are open and minimized without closing it. Furthermore, some apps turn hostile or those with abnormal behavior and whatnot. Thus, here’s a two-part troubleshooting technique that must help manage the “apps” on your iPhone XS Max.

How to Force Stop an App on iPhone XS Max?

Too many apps active at the same time including both background and foreground can be a problem for a smartphone at once. Irrespective of if you have a powerful smartphone like iPhone XS Max, you must know that apps can demand varied resources when active which can cause lack of resources of apps that are active and need the resources as opposed to those apps that are inactive but using the resources.

How to Uninstall an unwanted app on iPhone XS Max?

Once you have gotten rid of active and dormant apps by force stopping it, you should go through a list of apps that you don’t want. Here’s how you can uninstall an app from your iPhone XS Max that you need to follow for each app individually.

Solution #3: Update all the apps

Another method relating to the apps is that it needs to be updated. Outdated apps have their tantrum which is why you should avoid it. As you are already in the mud with iPhone XS Max that suddenly overheats after installing a new update (iOS), you need to check if all the apps are up-to-date or not as it can be a problem at once.

Solution #4: Restore all the settings on your device

Put an end to the iPhone XS Max that suddenly overheats after installing new update issue by restoring the phone to its original settings. This particular method wouldn’t endanger any of the data but it will surely fix any invalid configuration with the various settings that are available on your phone by dialing it back to its original factory settings and will give the phone.

If the new iOS update is the root cause and you are sure about it, check for references on the internet to see if others feel the same, if yes then you have two choices. You can stay with the current iOS firmware (say iOS 12.1.1) and wait until Apple rolls out a new update which could take a few weeks at max. If you don’t want to wait, rollback to your previous firmware (say iOS 12.1) which didn’t have the same issue and it is gone. You can always upgrade from the iOS 12.1 for instance to iOS 12.2 directly without upgrading to iOS 12.1.1. Note that the firmware version stated in this method is just for explanation purpose.

I must say that this is a major step so think it through if you want to go through with it. Since it is irreversible unless you are a programmer or hacker or someone who knows how to restore deleted data, you’ll need to obtain a backup of all the data you want to secure before proceeding further.

Your job is to keep a tab on the performance, app behavior, etc and note down if there’s any adverse impact on the phone or if the overheating problem pops up again in which case, you will have to go through with the next ultimate method.

Exhausted finding a solution for the said problem? Well, you can always turn to Apple Support for recommendations or visit a service center to get the phone professional diagnosed in case there’s a hardware issue which can’t be resolved using any of the methods I aforementioned. Note that you can either pick an authorized Apple service center that will diagnose the root and carry out the repair or replacement if you ask for it but it is expensive. On the flip side, a third-party service center will be cheaper but will void the warranty. Although I don’t endorse going to an unauthorized service center, there’s an option available at your disposal.