Today, a U.S based chipmaker introduced the new Snapdragon 675 chipset for mid range smartphones. It is an upgraded version of the Qualcomm’s Snapdragon 670 chipset which launched in August this year. The new chipset mainly focuses on gaming, imaging and artificial intelligence performance. The new chipset manufactured using the 11nm process. 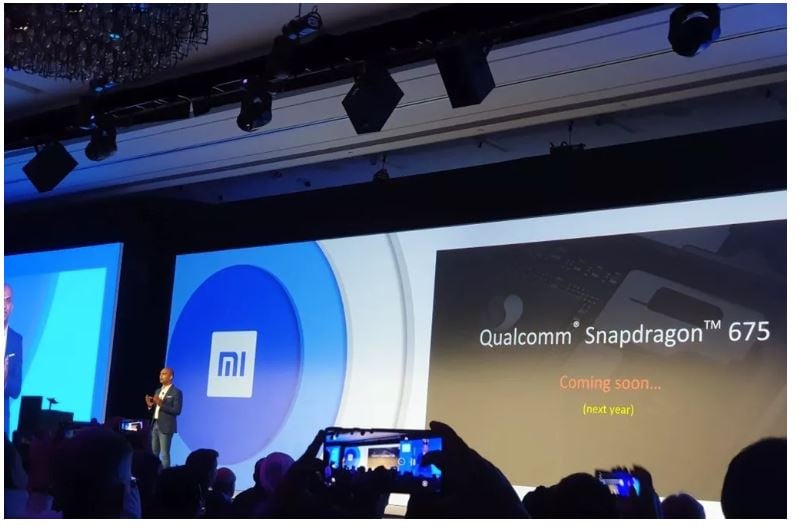 After the chipset announcement of SD 675 chipset at Qualcomm‘s 4G/5G Summit in Hong Kong. Manu Kumar Jain, Global Vice President of Xiaomi and Managing Director of Xiaomi India said that it will launch a Snapdragon 675 powered new mid range smartphone soon. After this announcement, Xiaomi is the world’s first smartphone manufacturer company to announce a phone powered by Snapdragon 675 chipset. The company could be the first one to launch the SD 675 powered smartphone.

The new SD 675 chipset Mobile platform supports Octa-Core CPU which divided into two parts. The first two performance cores clocks at 2.0 GHz and other six efficiency core clocks at 1.7 GHz. The successor of the SD 670 chipset brings advanced features to the mid range smartphone which usually available in high-end or flagships smartphone. The chipset can be coupled with Adreno 612 graphics processing unit which supports OpenGL ES 3.2, Open CL 2.0, Vulkan, and DirectX 12.

The Qualcomm’s latest mid-range chipset comes with Snapdragon X12 modem which supports download speed up to 600Mbps and 3x carrier aggregation. The new chipset is compatible with Bluetooth 5 connectivity. The SD 675 chipset supports Quick Charge 4+ charger which charges phone battery up to 50% in just 15 minutes. It also supports Qualcomm’s Aqstic and aptX audio technologies. It will also compatible with Wi-Fi 802.11ac 2×2 with MU-MIMIO, tri-band.

However, the Chinese smartphone did not reveal the exact timeline for the new mid range smartphone that will power by SD 675 chipset on board. We can expect the Snapdragon 675 chipset powered smartphones in the first quarter of 2019. The chipset is available for all OEMs.