Xiaomi is working on a new smartphone which is the Mi 6S. It will be the successor to the current Mi 6 model. The device may soon get unveiled for the public as it was spotted on the benchmarking website. The Xiaomi Mi 6S geekbench listing reveals some important info about the hardware and other features. 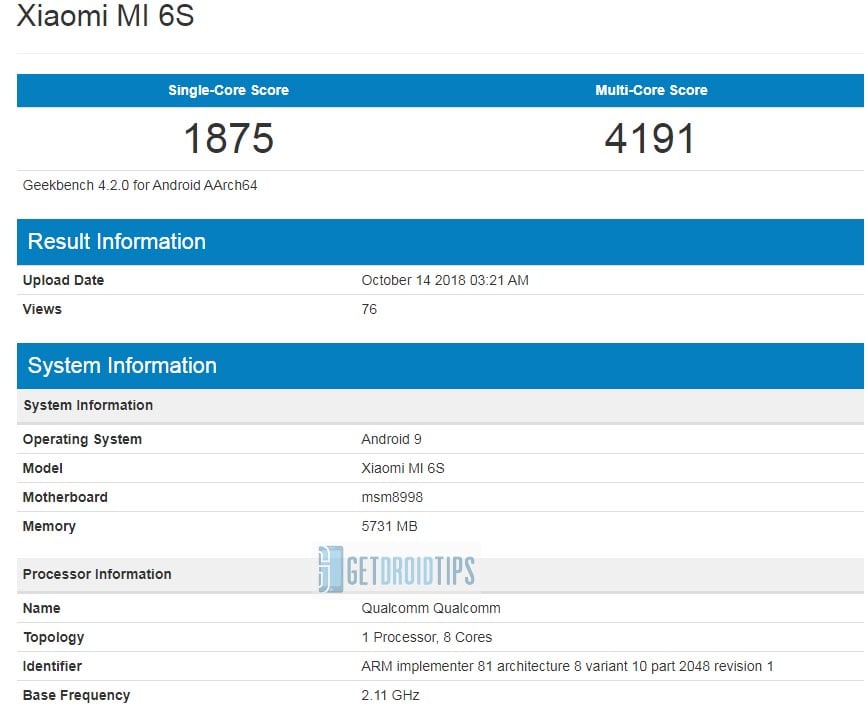 The upcoming Mi 6S will run Android 9.0 Pie out-of-the-box. Obviously, it will use the official Xiaomi skin MIUI 10. Along with that, the Xiaomi Mi 6S geekbench listing mentions it will pack 6GB of RAM. Under-the-hood, Mi 6S will run on msm8998 chipset which is the octa-core Snapdragon 835 from Qualcomm. It will have a CPU speed of 2.11 GHz. There may be other memory variant models with 4GB RAM but there is no exact info on that as of now.

Also, as we are talking of an upgraded model, the Mi 6S may flaunt a 6-inches display. This display size is pretty much the flagship staple these days. Also, it may pack a battery of 4000mAh. There is no other info on this device as of now. We expect that soon other reveals about Mi 6S will surface. In the camera set-up, we may see a dual camera of 12 MP lens like its predecessor. Lately, Xiaomi has been giving a lot of emphasis on AI, so definitely the camera set-up will be rich with AI-based features.

These are all mere guesswork and the specs are not official. We have to wait for official announcements on the upcoming flagship Mi 6S.