Receiving a new Android update, be it a firmware or a security update, is a good feeling as it provides the device with protection and new features. Xiaomi is not a name that pops-up when we talk about OEMs that push timely updates for its devices. You can blame it on its presence in multiple regions and also the huge number of devices under its portfolio for this. But, an average user does not care about any of these things and they expect timely updates on their devices from the OEM. Android 10 is going to be a year old now in September, and till now, there are tons of devices that are still waiting to experience Android 10 update. Among such devices is the Xiaomi Redmi 8A Dual.

Most of the mid-rangers from Xiaomi either get one major Android update and a few MIUI version update, which is the custom UI of Xiaomi. Xiaomi Redmi 8A Dual is another mid-ranger that was launched this year in February. As far as the specifications are concerned, it is powered by the Snapdragon 439 which is coupled with 2/3 GB of RAM. It comes with a 5000 mAh battery along with 32 GB of onboard storage. Redmi 8A Dual sports a screen size of 6.22 inch with Corning Gorilla Glass 5 protection and up to 400 nits of brightness. It has a dual-camera setup at the back with a single selfie shooter at the front.

Surprisingly, this device comes with Android 9 Pie MIUI 11 out of the box which is pretty rare for a phone released in 2020. Android 10 would be the first OS update for the phone. And if we go by recent reports, Redmi 8A Dual will pick up the Android 10 update pretty soon. Thankfully, a Mi forum moderator has shared some information related to Redmi 8A Dual Android 10 update. As per the moderator, the update will definitely arrive for the phone, however, the moderator shied away from sharing any ETA for the same. Here is what the actual comment reads

Dear user,
Yes, No ETA for it. Update will be provided when its ready. Stay tuned on mi global community for further info
Thanks 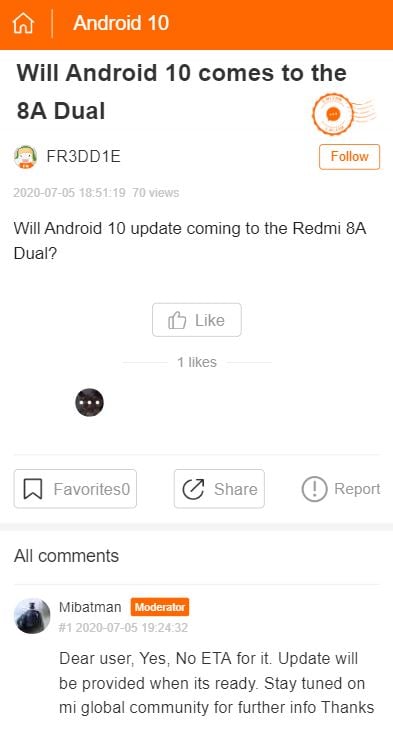 What this confirms that the Android 10 update will sure be arriving for the Redmi 8A Dual but when the update will arrive, this is not clear. All we can do is hope for the update to arrive in a few weeks or it could take a few months. We will keep you posted, once the update arrives for the Redmi 8A Dual smartphone. In the meantime, you can check out our dedicated Xiaomi smartphone section to keep yourself updated regarding all the latest happenings around Xiaomi phones.