After Android 11 went live, all the users got pretty excited to know when their devices will receive the latest OS from Google. However, not all brands are like Samsung or OnePlus. Xiaomi is not a brand that is known for its timely updates. Though one cannot deny that there are plenty of updates that Xiaomi rolls out for its devices. But they are mostly bugfix updates. Whatever the case may be, Android 11 is the hot topic around the users and Xiaomi fans are also eagerly wanting to know when will the update hit their Redmi Note 9 device.

The eagerness is understood as there is the first beta update for the phone then only the devices receive the stable version of the update. And users want the beta stage to complete as quickly as possible. But that is of course not in the hands of the users and it totally depends on the plans of the Android 11 rollout by Xiaomi. FYI, Xiaomi has already released the stable Android 11 updates for Mi 10 and Mi 10 Pro. Which is a welcome sign that Google wants to bring some changes to its update rollout policy.

Talking about update policy, Redmi Note 9 users should note that Redmi series devices receive only one major OS update. While the Mi branded devices receive two major OS updates. This could be frustrating for the Redmi users, as both the brands are run by Xiaomi. Redmi Note 9 was expected to receive the Android 11 update, but there was no clarity on when the users should expect the update. And when eager users asked about the availability of the Mi Pilot program for the Redmi Note 9, a Mi Community responded by saying the following:

Can’t say. I doubt there would be a recruitment for MIUI 12, but there could be, for Android 11. But we’ll have to see. 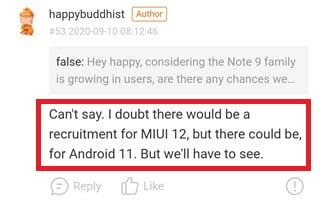 So, this might give some hope for the Redmi Note 9 users that before the rollout of the Android 11 update, the company will recruit beta testers for the update and after the success of the update, it will be made available to the masses. However, do note that this is not a confirmation from Xiaomi and things are subject to change. So, it is advised to take this piece of information with a pinch of salt. Whatever the case may be, we will keep an eye on the lookout for any further developments in this regard.