Xiaomi is all set to unveil a new range of its midrange devices on 19th September event. It has teased another surprise device which is dubbed to be the Mi 8 Fingerprint edition. This device will pack the in-display fingerprint sensor and will be the first Xiaomi device to do so. However, its features are pretty much similar to the Mi 8 Youth. Both these devices will release on the 19th September event at Chengdu.

In the unveil event, apart from the Xiaomi’s smartphones, the all-new Mi Band 3 will release as well. Recently, we also shared some live images of the Mi 8 Youth edition. 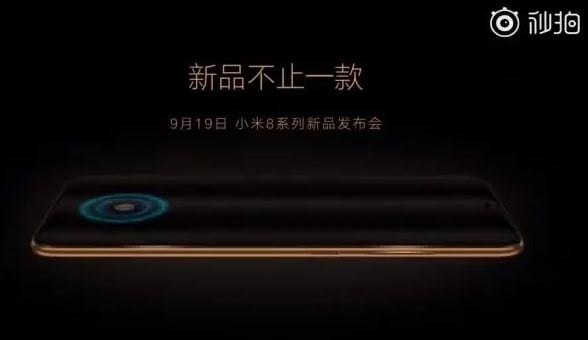 As you can see the Mi 8 fingerprint edition has a shiny gold finish. It will pack Snapdragon 710 chipset with options for 6 and 8GB RAM.  It will flaunt 6.26 inches of display with Full HD+ resolution and 19:9 of aspect ratio. The camera section will bring a dual camera of 12 + 12 megapixels with a front face shooter of 24 megapixels. A battery of 3250 mAh battery will power-up the device and of course, it will have Xiaomi’s own MIUI 10 onboard. There will be two models with Black and Gold colors.

The Mi 8 Fingerprint Edition will bear a price tag of CNY 1999 which roughly converts to $290. So, it kind of falls into a mid-range grade of smartphones. Also, having the in-display fingerprint sensor will be a great selling factor for Xiaomi and it is also the trending technology smartphones are using. So, which one will you go for..? the Mi  8 Youth edition or the Mi 8 Fingerprint Edition..? Both devices definitely look good and bring promising features.