Probably tomorrow, Sony will unveil its 2018 flagship the Xperia XZ3atthe IFA 2018. We already had a glimpse at the four color variants of XZ3. Besides, one of the biggest discussion was whether the XZ3 will come with the latest Android Pie or older Android Oreo. However, latest Xperia XZ3 GeekBench scorecard confirms that XZ3 will pack the tasty Pie treat for its users. The device on the speculated Xperia XZ3 Geekbench scoresheet goes by the model number H8416. 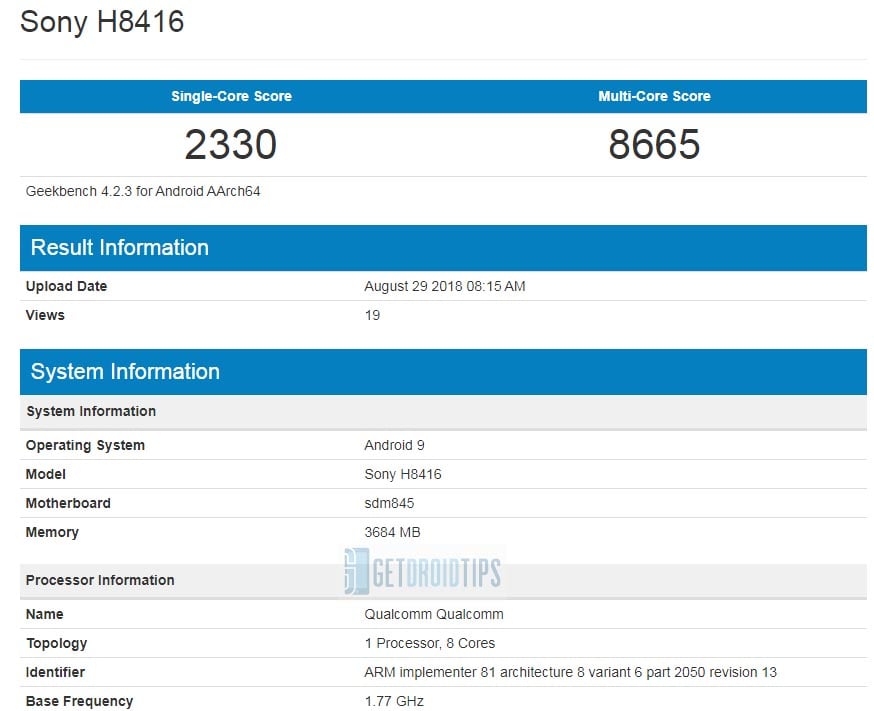 Most of our assumptions are turning out to be true regarding the upcoming Sony flagship. Geekbench score confirms some of it. It will pack an octa-core 1.7 GHz Snapdragon 845 chipset from Qualcomm. Also, XZ3 will bring 4 GB RAM. We believe there will be another variant with 6 GB RAM as well. In storage, there may be a single 128 GB or an option to choose between 64GB and 128 GB. The Xperia XZ3 may flaunt a display of 5.7 inch LCD with full HD+ 1080 x 2160 pixel resolution. There will be no notch and the display has rounded edges.

The big rumor revolving around Xperia XZ3 is its single rear camera that may bring a 48MP lens with Quad-Bayer sensor. A selfie shooter of 13MP may house itself on the front face of the device. Though there is no mention of pricing, the sales will pretty much kick start later next month. So, are you excited for the all new Xperia XZ3 from Sony..? Stay tuned with us and we will keep bringing you more updates on the flagship.