Asus is a multinational corporation that excels in various sectors such as consumer electronics, smartphones, gaming hardware, etc. It’s a Taiwan-based company that has been working on its Zenfone lineup for a long time and has another series that excels in mobile gaming called Asus Republic of Gaming or ROG which is a gaming beast.

Talking about Android 10, Google finally unveiled the new OS on September 3 after several of its beta versions were released for testing which included Asus 5Z as a part of its Project Treble. Furthermore, Google announced that it will be naming its OSes with numbers rather than desserts so Android Q was renamed to Android 10 although you can spot a few hints of Android Q within the OS. As per the timeline, Google has made its new OS available for Pixel and Essential phones while some of the other smartphone makers have picked it up as well including Asus 5Z. It is now up to Asus to roll out the update to its smartphones after customizing it to fit ZenUI which could take a few weeks if not earlier. 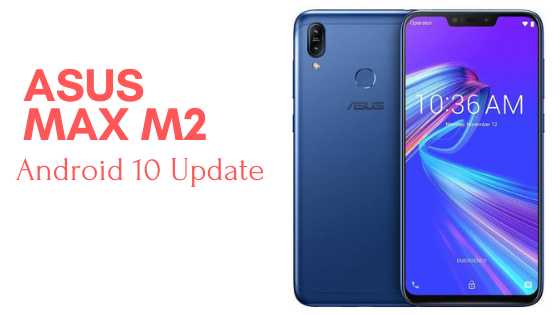 Google tried and tested Android 10 for months before officially rolling it out. It brings a tonne of features and in fact, it has more features than its predecessors while improving the performance of the device to the next level. Check out the features right here.

Asus Zenfone Max M2 was launched with Android 8.1 Oreo out-of-the-box last year and was upgraded to Android 9.0 Pie a few weeks ago. Since the device was launched merely a year ago, it is speculated that it will be getting the Android 10 update pretty soon. A roughly estimated date suggests that it could get the update between Q4 2019 and Q1 2020 although it would be later and sooner if in case Asus decides to roll out the update to this device paired with its ZenUI.

Asus rolled out its Asus Zenfone Max M2 in December 2018 along which shares some of its traits with Max Plus M2 and Max Pro M2 as well. The device has a front-glass and plastic body with a 6.26-inch IPS LCD 720×1520 pixels resolution. The device comes preloaded with Android 8.1 Oreo and was upgraded to Android 9.0 Pie and it is waiting in tow to get its further upgrade to Android 10.

About the specifications, the device has a Snapdragon 632 14nm octa-core processor bundled with Adreno 512, 3/4GB of RAM along with 32/64GB of internal storage options available with it. Furthermore, the device comes with dual 13+2MP sensors at the back while the front is populated with an 8MP sensor. It has a large 4,000 mAh Li-Ion battery and it is available in Black and Blue color variants.