New update on 1 July 2020: Finally, more Asus ZenFone Max Pro M2 users are receiving replacement units. Earlier, we received information surrounding only one individual who received the replacement device. However, multiple users are taking to social platforms such as Twitter and Asus community forums (reports: 1, 2, 3) to confirm their device has been replaced. Moreover, early reports indicate that Asus will be replacing devices that aren’t under the warranty period too. This is move is applaudable since the problem arrived from as a result of the company’s action. Replacement units will be given to users who send in their bricked devices to the service center. So if you have been affected by the problem, now is the time to get your device replaced.

New update on 29 June 2020: It appears that Asus has begun replacing devices that have been affected by the issue. This information is based on a new development on the matter. An affected user took to the company’s community forum page to inform others regarding the device replacement process. In his post, the user claims that his phone was replaced at the service center. Unfortunately, the same cannot be said for other users who haven’t had much luck. It’s still not clear if the company will replace all affected user’s devices. However, since the company has replaced at least one user’s device, we expect to see other users getting a replacement unit soon.

Quick software updates are still a dream for most Android users. Android 11 is just around the corner, however, OEMs are yet to update a few devices which are due for the Android 10 update. This is the case with the Asus ZenFone Max Pro M2 as well. The company has been beta testing Android 10 on the device for several weeks. And those who have registered to take part in the beta have now received multiple updates.

Unfortunately, not all software updates go according to plan. The Taiwan-based smartphone manufacture recently released an update for the ZenFone Max Pro M2 which had a major bug. Several users have been reporting that the device does not boot after installing the update. The update version in question here is the Android Pie-based 16.2017.2002.073 software update.

After installing the update, the reports of the Asus ZenFone Max Pro M2 being stock on the boot logo started popping up. Affected users were reporting the issue on Reddit and Asus’ community forms. To add to the confusion, Asus has not addressed the issue yet. And in their latest April update 16.2017.2004.075, there is no mention of the fix for the issue. 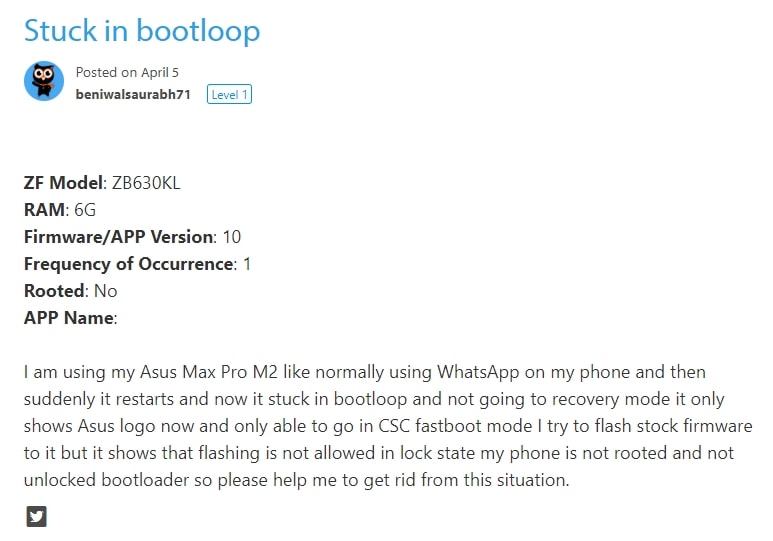 Moreover, affected users are claiming that manual flashing isn’t working. This is because the device isn’t being able to boot into recovery mode to install the new firmware. It’s unclear as to what is causing the device to get stuck on the boot logo.

At present, there seems to be no way to get over the issue on the Asus ZenFone Max Pro M2. To add fuel to fire, given the current situation, taking the device to a service center isn’t a viable option. Therefore, users who have the issue on their device may just have to wait until the service centers are operational again.

It’s also unclear at the moment if the issue is widespread or has just affected a few units. Usually, beta software updates often carry the risk of creating boot issues. However, in this case, the issue arrived with what was supposed to be a stable build of Android Pie. To be on the safe side, we suggest waiting a couple of days at least before installing a software update. Being patient will allow you to know whether the software update carries any bugs or glitches that might ruin your user experience. You can also check our Asus Android 11 Update Tracker. Additionally, you can download the latest Asus USB drivers.