From the last three months, ZTE sub-brand Nubia 18 smartphone in the news and still there is no word about the launch date of it. This is the flagship smartphone of the company. New the fresh report suggests that the phone may launch soon. Last week on Weibo, the Nubia brand’s CEO replay on a post, we believe the phone is close to launching. 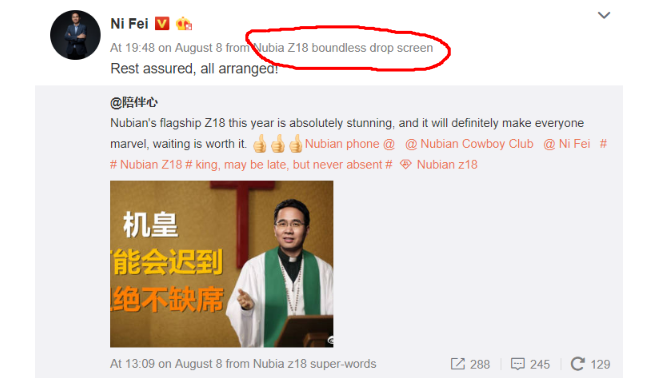 ZTE Nubia Z18 smartphone comes with a notch design on top similar to the Essential PH-1. The company called it waterdrop but this is different from the Oppo’s F9 and F9 Pro design. In the recent past, the phone appeared on TENAA and revealed that the Nubia Z187 will come with a 5.73-inch display and 8 Gb of RAM on board. The device also spotted on Master Lu benchmark app that revealed the phone will come with 2160 x 1080 pixels of resolution display, 6 GB of RAM and Qualcomm Snapdragon 845 processor under the hood.

The Nubia Z18 phone will available in two internal memory variants, 64 GB and 128 GB. The phone will feature with dual camera sensors on the back side, one of them is 24-megapixel. It will have an 8-megapixel front camera for selfies and video calls. It will be packed with 3,350 mAh capacity battery inside the body. It will run on Android 8.1 Oreo operating system out of the box.

There are speculations that the company may launch the ZTE Nubia Z18 flagship smartphone by end of August.