Redmi has played a significant role in starting the smartphone revolution in the last few years. Since last few years, they have become one among the most discussed brands on the internet with record sales in different parts of the world. Of course, their devices are best in every aspect and have won the heart of many people. It is true that many smartphone lovers now prefer only this Chinese manufacturer when it comes to buying a new smartphone. The fact cannot be denied that Redmi has made a lot of efforts in making their devices best in every aspect. Today we are going to discuss the common Redmi 5A problems and fixes.

List of Best Custom ROM for Xiaomi Redmi 5A [Updated]

Download and Install AOSP Android 13 on Xiaomi Redmi 5A

There is nothing wrong to say that 5A is one of the best devices ever launched by the Redmi. Like all other devices, it too got a lot of popularity in a very short span of time. Many users are using it currently. However, it is true that like other Android-based widgets, it is also suffering from so many bugs most of which are related to Operating System. It is because of the very same reason you need not to worry about anything in case you are also facing the same. The fact it most of these issues can simply be eliminated if you follow the information about the common Redmi 5A problems and fixes as it is mentioned in this post. 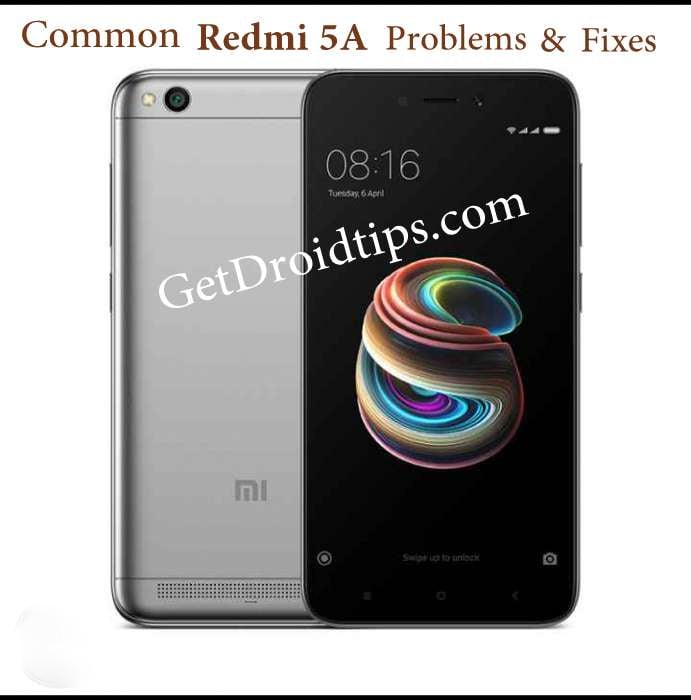 Let us first have a quick review of the hardware specifications of this wonderful smartphone. Launched in the November 2017, it has a very large number of users and a few have reported about the common issues they are experiencing. This device comes with a 5-inch touchscreen display which is good enough to view any sort of content due to its ability to provide a 1280 x 720 pixels resolution. It has been powered by 1.4GHz octa-core processor to meet the level of performance modern users expect from a device.

The phone packs a 16GB ROM and 2GB RAM. It is possible to extend the storage by upto 256GB through a microSD card. The 13 MP primary cameras and a 5MP selfie shooter is good enough for capturing the quality snaps and shooting the HD videos. As far as the matter of OS is concerned, The Redmi 5A runs on Android 7.1.2 Nougat and has a 3000mAh battery. Of course, these specifications are best but still, a few users have reported about the minor issues they are facing. Check out the useful information about the common Redmi 5A problems and fixes in the below paragraphs.

Make sure you follow all the information about common Redmi 5A problems and fixes in the way it is mentioned. GetDroidtips.com cannot be held responsible for anything that goes wrong with your device due to any reason.

A device with connectivity issues is almost useless. This statement is quite true and those who face them can understand the same better than anyone else. The fact is it’s necessary for the users to take the actions against them immediately when they declare their presence. Keep this thing in your mind that there can be certain factors that are responsible for this type of problem. Try the following to avoid it permanently.

This problem is common in a few Redmi devices. The fact is it declares its presence when you use any other earphones than the one which is authorized by Redmi. Try the following methods to avoid this issue

A slow performing device doesn’t let users perform all the tasks smoothly and in the desired time frame. Therefore taking appropriate action against the same is very necessary. You can try the methods listed below to keep up the pace against this issue.

Continuously terminating PC connection or no respond of device upon connection with a PC is something that is quite common issue. You first make sure that there is no damage to the cable you are using. Check out if the USB drivers are up to date. The problem can be in the connecting port also. First simply restart your PC and your device and see if the problem is gone. In case it is still present, try the following methods.

Camera related problems declare their presence due to a diverse array of reasons in a smartphone. It is very necessary for the users to understand the same before any action is taken. The good thing is most of the issues can be troubleshooted manually. Try the following methods to get the things back on track again.

Apps not working properly (common Redmi 5A problems and fixes)

Of course, apps are important and a lot of tasks can be performed by smartphones users only through them. It has been reported by a few Redmi 5A users that the device have issues when it comes to the functionality of some important apps. If you are too facing this problem, here is the solution

First of all see if the problem is gone with a simple reboot. If it is present, insert the SIM in another device to see if it works. Pay close attention to see if there is any physical damage on the SIM. If everything seems ok, try the following methods

If your Redmi 5A is charging too slowly, this can be due to more than one reason. You can try the following methods to avoid the issue

The Redmi 5A comes with a 3000mAh battery. Although it is capable to take the load of full day activities of a user, a few users say they need to charge the device atleast 3 times a day. If this is a problem with your smartphone also, you can try the following methods to avoid the same.

Redmi 5A overheating (common Redmi 5A problems and fixes)

An overheating device is generally not considered as safe to use. Therefore you need to pay immediate attention to the device. There are certain reasons for this and it is not always necessary that this problem is due to hardware issue. It is expected that in the next update the same will be fixed. By the time, you can try the following methods to get the things back on track again.