Users have reported that the Mac Studio sound is cutting out. The sound from the Mac Studio is not pleasant. The overall experience is disturbing the workflow and affecting the content creators negatively. We have compiled a list of solutions to resolve the sound issues in the macOS version. 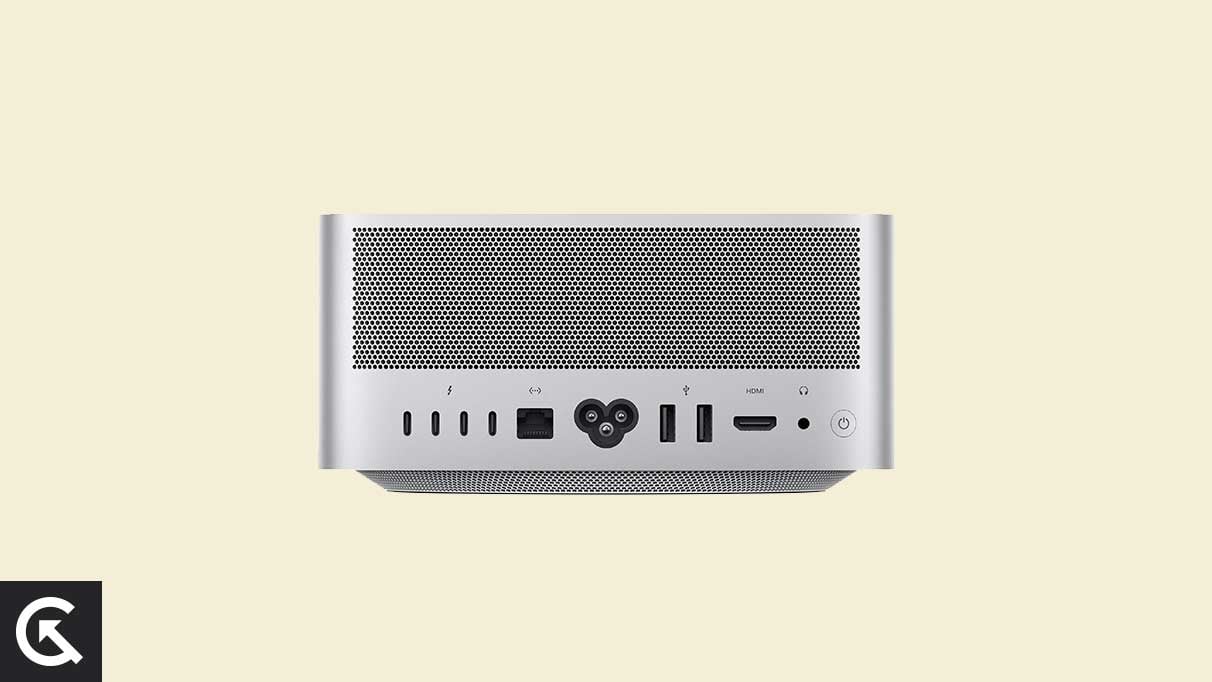 Why is Mac Studio Sound Cutting In and Out?

The Studio Display sound issues are seen in the 15.5 version. Apple has released multiple software updates over the months to counter audio problems. We have listed valid reasons why Mac Studio sound cutting in and out.

Apple releases a new software edition at the official event. The yearly releases offer new features and upgrades to the macOS edition. The wide range of macOS machines faces bugs and glitches. The Cupertino-based company has skilled engineers to identify the root cause and resolve them through an update.

The Studio Display has dedicated six speakers to produce spatial audio. I have shown you how you can restore the audio to its former glory.

A faulty Thunderbolt cable can create noise because the wire is having trouble sending the signals. I have suggested a solution to confirm the doubts and start looking for a replacement. You need a separate Mac computer or a machine that supports Thunderbolt technology.

The newer Apple Silicon SoC has changed the game in the computer industry. Millions have purchased the newer generation M2 machines. Use an Intel-based Mac computer and clear the doubts.

The Mac Studio built-in speaker may have some issues. A faulty speaker will start showing signs of failure. Use YouTube, iTunes, and Spotify to play music on the platform. Check the audio playback using tools and identify the failure.

The Mac Studio has Apple drivers installed in the system. One of the drivers could be failing and freezing the computer. I have shown you how to restart the drivers and solve most software problems. The Cupertino-based company never released the drivers publically. You cannot remove them or reinstall them separately.

Millions of Mac computers stay in sleep mode for weeks and months. I appreciate the Apple team’s efforts to conserve the battery during standby. The hardware and software need some time to cool off. No one talks about it, and the hardware lifespan decreases.

The macOS has a handy feature to put the computer in sleep mode. The MacBook Air 2017 consumes less than 5% of battery life after twelve hours in standby mode. However, give the hardware and software hours of sleep.

Remove the power plugs from the Mac Studio and Display. Leave them alone for two hours. Let the hardware dissipate the heat for the next two hours. Turn on the computer and the software will restart the Apple drivers. The choppy sound will disappear from the Studio Display.

When was the last time Mac Studio and Display received a cleaning session from you? Manufacturers haven’t released a self-cleaning Mac computer. Time to pick up the cloth and remove the dirt from the computer. I have laid down some rules before you start cleaning the setup.

a. Use a microfiber cloth.

b. Liquid is forbidden when cleaning the Mac computer and the display.

c. Remove all cables and clean them. Use cotton buds to remove dirt from them.

e. Remove all cables and clean them.

Take half an hour and clean the setup thoroughly. Never rush into things because they can damage the internal components.

The newer macOS version has created a choppy audio problem in the computer. Don’t blame the Studio Display or Studio Mac for the bad audio output. Update the software and resolve the issue.

1. Connect your computer to the Wi-Fi network.

4. Let the Mac Studio scan for the latest update.

I request the readers visit the update page and read the patch notes. The developers notify the users of what they have solved in the software update.

Connect Studio Display To Another Source

Mac Studio owners have a spare MacBook or another computer. Use the Intel-based Mac to connect the external display. Play some music through the secondary machine and clear the doubts. The speakers will work if there are no problems with the hardware.

a. Shut down the Mac Studio.

b. Remove all power cables from the machine and monitor.

Turn on the Mac Studio and monitor to find out the truth.

Apple has added a diagnostics tool to Mac computers. Use the built-in tool to learn about the hardware situation. You don’t have to run commands or anything. Follow the tutorial to learn how you can use the built-in diagnostics. Remove all external components except Magic Mouse and keyboard. Keep the Mac in a ventilated area.

2. Follow the below tutorial for Intel or Apple Silicon-based computers.

a. Press the “Power” button.

b. Immediately press and hold the “Power” button.

d. Release when the progress bar appears on the screen.

Release the keys when the language selection window appears on the screen.

a. Turn on the Mac Studio.

b. Immediately press and hold the “Power” button.

c. Release the keys after the progress bar or startup options appear on the screen.

e. Wait for the Apple progress bar to reach the end.

Create a data backup using iCloud or copy them to an external storage drive. There must be a problem with the macOS software. We can’t fix broken things since we don’t have access to the source code. Reinstall the macOS using a USB flash drive or Disk Utility.

You don’t have the option to install the latest macOS edition. Reinstall the macOS or install Linux operating system.

You can try Ubuntu 22.04 LTS or Kubuntu 22.04 LTS in the Mac Studio. Spend a few thousand dollars and upgrade the machine. Overall, it’s your call to give a new life to the old Studio model or move on.

Contact the Apple customer support team for assistance. You can’t ignore the Mac Studio sound cutting out or choppy. Reach the Apple store and ask them to refund the money or issue a replacement. You can wait for the macOS update to resolve the issue if it’s a software-related problem. Let us know how you solved the choppy sound in the Mac Studio and Display.