Power button not working problem is not a rare issue on a smartphone, however, it is impactive. The thing is, the power button helps to reboot the system, booting into recovery mode, safe mode, and using it to soft reboot, force reboot, and more. However, once you discover that the power button which is one of the only three physical buttons you have on your phone, it becomes a tad bit difficult to use your phone. But yes, there are several cases wherein you can use a number of different methods to sustain its working if indeed it is a hardware problem while scrutinizing and fixing the problem if it is software-related problem anyhow. 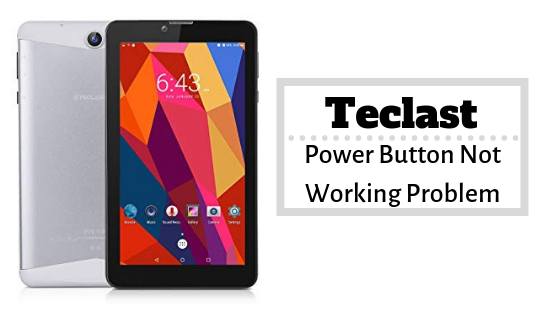 Considering the fact that it could be a cause of software failure, let’s deal with the obvious methods to eliminate the doubt if any.

Yes, I know it is insane that I mentioned this method which you cannot use since the power button is not working and you cannot reboot without it. But unless your phone is switched off, there are a number of things you can do. First up, you can press power plus volume up or down (depending upon your model) to perform a force reboot. Next method is to use scheduled turn on/off feature that you’ll find in Settings app which is a great method to automatically reboot the device with an interval of a minute. You can also connect the phone to the PC yo use PC Suit or any other method to perform a reboot remotely.

If in case it is a software failure, at last, you must clear cache files from the device to steer away from any problem related to software bugs and issues. This includes power button not working the problem as well which is where you can obtain certain methods listed below to clear it out.
Storage Cache: Open Settings app and tap on Storage → Cache Memory and delete it.
App Cache: Open Settings app on your device and tap on Apps → Downloaded and click on any third-party app and press ‘Clear Data’ and ‘Clear Cache’.

Update all the apps and the firmware

A number of apps and hardware components is something firmware handles by enabling interaction between the same. However, the problem with software is that it needs updates to stay ahead of the game in terms of functionalities, features, and protection against intruders like viruses, malware, etc while staying clear of any bugs in the current version of the said app/firmware. This is where updates come handy and since Android app developers are pretty agile by updating apps every month or so, it becomes easier for users to update all apps either manually or set up ‘auto-update’ within Google Play Store → My apps and games.

On the contrary, firmware needs a little more time to update Google usually updates firmware once or maybe twice a year mainly consisting of a security patch. But there is a humongous sector of 2+ billion smartphones and tablets that are shunned away from getting updates since Android doesn’t actually supports all the smartphones depending upon their release date, Android version, make and model, price category, etc.

What are the methods to use with a broken power button to use the device?

Modern smartphones aren’t just modern but offer a varied number of methods that you can employ in order to use a phone with a broken power button but there are three cases to confer.

Scenario #1: When the phone’s screen is lit

Assuming your phone’s screen is still active even after you are facing power button not working problem, here are a few ways you can attune to using the phone without the need to press the power button.

Go to Settings → Display → Stay Awake or Sleep where you can extend the duration to 30 minutes which is maximum. This will ensure that the phone’s screen stays active for 30 minutes without any activity but it will succumb if you don’t provide any stimuli within the said period.

This is a flagship feature where the screen will remain always enabled it or it will use proximity sensors to detect any moment and show a watch on-screen. This is where you can double tap on the screen to light it up.

As mentioned in the very first ‘reboot the system’ method, you can hail this feature listed within Settings → Accessibility or System Utilities where you can enable it.

Alarms can come handy in such cases as this functionality will trigger the screen to light up and allow you to take control.

This is a comparatively new method that we have added in this ‘power button not working problem’ category. You need to set up Google Assistant by training it to understand and recognize your voice and then, just say ‘Ok Google’ to activate it and command it to do stuff. Now, considering the fact that your power button is not working, you can summon Google Assitant with the two magical works i.e. ‘OK Google’ and the screen will light up.

Scenario #2: When the phone’s screen is down but the phone is switched ON

There are plenty of methods listed n Scenario #1 as well that you can use in different situations to satisfy the need to use a phone with power button not working problem.

This has become standard across all smartphones since a plethora of budget devices have it too. The thing is, you need to set it up which is something we do after buying the phone and rest is all about keeping the finger on the scanner and voila, the phone is unlocked and that’s as simple as that.

This comes either as an addon with the brand’s OS bundled with Android OS or you can enable a third-party app that you’ll find on Google Play Store to execute the same method. Simply double knock or tap on the screen and the phone will unlock if not protected with password or facial recognition system but hey, at least the screen is lit now.

If you are somewhere outside and can’t get hold of any third-party app after discovering that the power button is not working, you can actually ask someone to call or ping you that will do its job as well.

Plug the phone to a charger

It’s not a secret that plugging the phone to a charger and firing it up will light up the screen as well. So, you can actually use this if the power button is not working.

Plug the phone to a power bank/PC/laptop

If you do not need a wall unit where you can plug the charger, you can always use the PC or a portable solution i.e. laptop or even power bank to do the same.

Scenario #3: When the phone is switched OFF

Unfortunately, little do we know about how to use workarounds against power button not working problem if the phone is switched off. If your phone has a removable battery, you can indeed put a newly charged battery hoping that it would boot up or plug the device to a charged and use force reboot technique to light it up when it shows charging annotation on the screen when switched off.

What are the apps alternatives to it?

Now you talkin’. You are using an Android Teclast smartphone which means unless your phone is switched off, you can do a lot more using its Google Play Store and the apps within. You need to search for apps like ‘Power Button to Volume Button’ that will remap the functionality of broken power button to one of the volume rockers which is how you will be able to lock and unlock the device. There are plenty of other apps like ‘Shake Screen On/Off’ that enables shaking the phone to turn off the screen and back. Next app in our trove is ‘Gravity Screens’ and ‘Proximity Actions’ that as suggested, work with the help of sensors that enable users to take various actions such as locking and unlocking the device and more.

I know it is just a fancy title but the thing is, you need to report the problem to a service center since there is no chance that you’ll use the phone without a working power button even though there are alternatives available which are temporary and can fail at any given instance. Thus, the best option after doing whatever you could to get the phone working is to visit a nearby service center, report the problem, pay the charges if any and get the problem fixed either via replacement or repair.