Now that the smartphones are getting more powerful, manufacturers have started replacing physical buttons with its on-screen digital counterpart such as the home button is gone is plenty of latest smartphones. But there’s one button which has stayed and probably stay for a long time and it’s the power button, it is the powerhouse of functionalities as it can boot and reboot the system, enable the phone to boot into safe mode, recovery mode, fastboot mode, etc; allow to light up the screen and turn it back off, allow to disconnect call and take a screenshot and counting. So, what do you do? What are the ways you can find the cause and resolve it? Here is an article on Walton power button not working problem and how you can replace it with on-screen components temporarily. 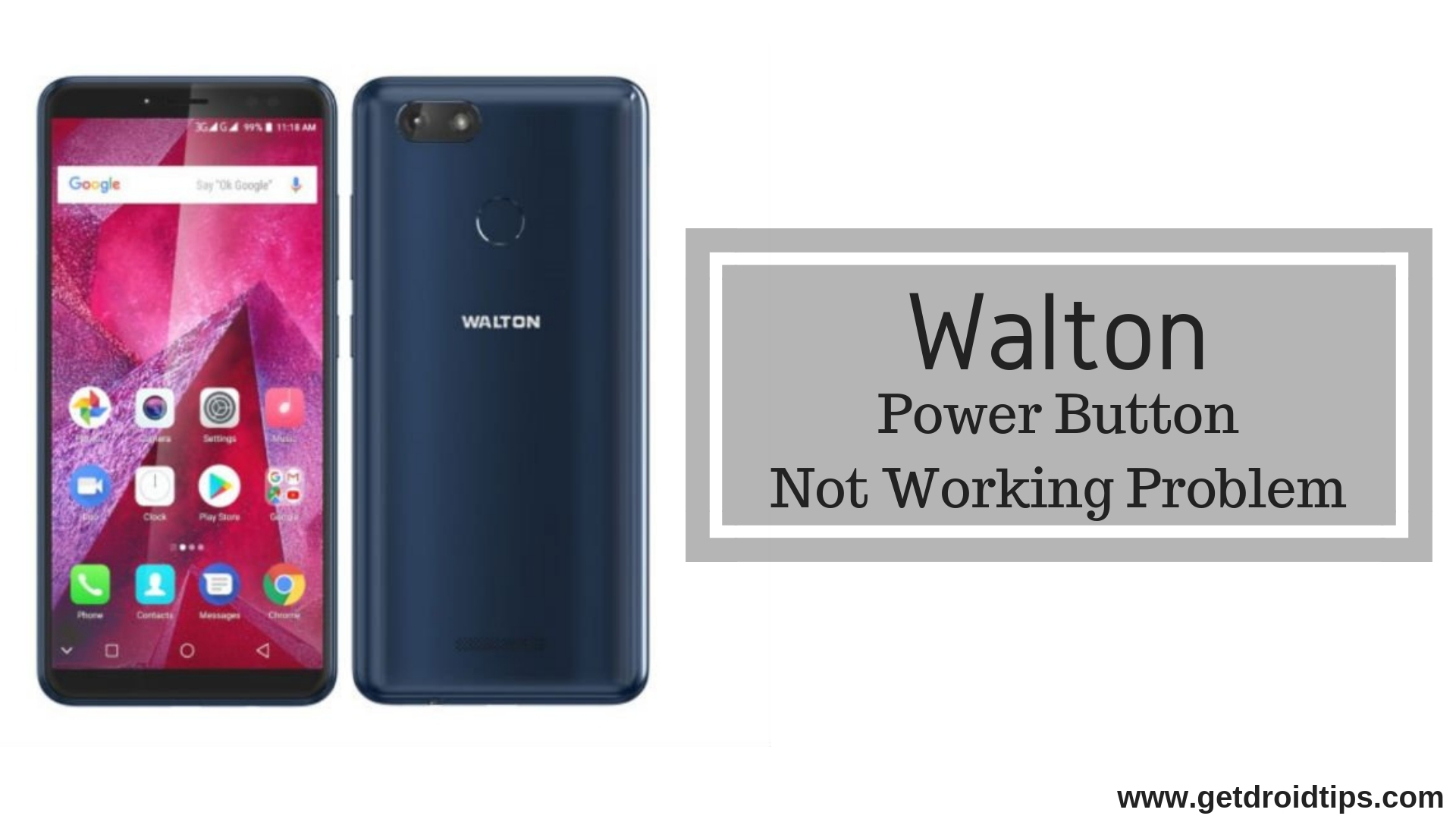 Let’s first see what things you can do to scrutinize if the power button, not working problem is due to a software glitch.

Okay, it would be difficult to turn off the smartphone if its power button ain’t working but it takes a little attempt to work around it so that you can narrow down the list of the culprit behind why it isn’t responding. Rebooting the system is one of the methods because if the power button not working problem swung by just like that (suddenly), it could possibly be a software issue or minor error that occurred when you tried pushing the button.

For this, you need to reboot the system and you can do so either by forced restart that is by pressing the power button and volume up/down button together since it totally depends on which model of smartphone you use. If you have a non-removable battery, you can simply yank it off the turn off the phone and upon inserting it, the power button must work if it indeed was a software issue. If not, you must have USB debugging mode enabled on your smartphone which is located at the Settings >> About Device >> Developer Mode so that you can connect the phone to the PC Suite and get it started.

I usually put a lot of emphasis on updating all the apps installed on the phone because it is crucial. It is because outdated apps can cause a slew of issues but once they are treated with an update or essential a bug fix, you get both the benefits of new features and capability to uproot the error that caused any problem. Also, you need to make sure that the Android OS is updated too since it is the ultimate piece of software that handles both hardware and applications on a smartphone and thus, it needs constant updates. If you use an old smartphone or can’t get hold of updates, you can roll back or install a custom ROM to get rid of the issue.

Get rid of cache files if your phone is acting weird. You can get rid of these files by proceeding to the Settings >> Apps >> Downloaded where you need to tap on each app that you downloaded and press ‘Clear Cache’. Secondly, you need to get rid of storage cache which is a different section placed in the Settings >> Storage >> Cache Memory. Since the power button isn’t working, you can’t visit the recovery mode and delete the cache partition and thus, we should skip that method.

If indeed you are sure that the problem is caused due to software issue but the problem seems to be unaffected even after you updated all the apps and reboot it, you can use the reset phone feature on your phone to get the software issue sorted. Since the power button isn’t working and it would require ADB and fastboot tools to operate the phone using the computer, let’s stick to the less invasive reset alternative which is through the Settings app.

How to use the phone with a broken power button?

This feature has become a quite popular and every smartphone nowadays seems to have it. So, if your Walton smartphone happens to be one of ‘em, you are in for a treat because enabling it would eliminate the need to press the power button which isn’t working, to light up the screen. Simply tap on the screen and it must turn on assuming that the phone is still turned on.

The always-on display has become common but it was not a thing in last year’s smartphones or prior to that. Thus, you are stuck with the primitive method to keep the screen alive for longer duration which usually maxes out at 30 minutes. Once you have enabled it, the screen with light up and stay awake for 30 mins but it will turn off if you fail to provide stimuli as in a touch on the screen for the said duration. To conclusion is, you’ll have to tap on the screen at least once every 30 mins to keep the screen alive.

Set up the double tap to wake up

I always keep this feature activated since it saves a lot of battery power, especially at the night when I don’t use the phone. When you set scheduled ON/OFF, the phone will automatically switch off at the set time and switch on automatically which gives you a smoother performance, saves a chunk of battery and temporarily works as a virtual power button.

What to do if the phone is on screen turned OFF state?

Connect to a charger

The phone is turned on but the screen is off and you are facing the power button not working problem? Time to connect the phone to a charger or power bank that will light up the screen in no time.

Connect it to a PC/Laptop

This is an alternative to the method specified above where the phone will light up upon connecting to the laptop or PC. But this particular method is immobile and not portable or say involves a lot of work if you are carrying a laptop for the same.

Set alerts or ask someone to call

The power button isn’t working. Now what? If you realize about the error when the screen was still alive, you could have used any of the methods prescribed above to find a workaround like you could have set alerts or scheduled automatically switch ON/OFF after certain duration when you need to use the phone. But when the phone is turned ON but locked or the screen is OFF, you can ask your friends or use another phone to call yourself or drop a message that will effectively light up the screen.

Use apps as alternatives to the broken power button not working problem?

As everyone who uses Android knows, there’s an app for anything you can think of and yes, there are plenty of apps that allow the user to replace the broken power button with other options like apps.

It works with various sensors mounted on a smartphone as it detects the orientation of the phone and provides an output accordingly. You can change the orientation for variables like pocket sensor, table sensor, etc to disallow the phone from unlocking when on a tablet or in a pocket.

You can set waves and holds in this app to perform not just locking and unlocking but also to open a certain app or feature on the phone. You can go into its settings to change the type of waves and durations to get favorable results.

The app is simple. it swaps the functionality of a power button to the volume button as the name suggests. The app allows you to turn off the screen and light it up again and that’s all. You can download it here.