Isn’t it frustrating when you fully charge the phone and use it for a while only to realize that the battery is draining too quickly? Yes, it may be organic and explanatory if you are using too many apps at once or if you are using battery-hungry apps too much but there are certain inorganic causes behind the battery draining problems as well. It may not be easy to make a list of all the things that are causing the battery to drain quicker than it should but you know what, we at GetDroidTips do listen to our users. Thus, here’s a detailed troubleshooting guide on how to fix battery draining problems on your Teclast device that you can use in your favor and yes, there’s nothing complicated or as people would say, rocket science here so follow through to steer away from this battery draining problems. 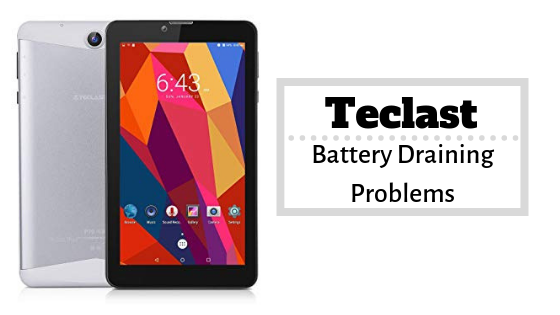 Whenever you feel like there something wrong with the device or if it is performing abnormally or behaving weird, reboot the device and chances are that you won’t see that issue again. This is because restarting the system fixes many bugs and temporary system and software glitches that would otherwise one or other problems such as the battery draining problems that we are discussing right here.

The organic cause behind it

You can’t blame the phone or the battery every time you see that the battery is draining quickly. Unless you are using the phone to call or text, the battery will be in good shape. However, when you start multitasking with various apps opened at once with mobile data or Wi-Fi enabled to access the internet, things start to take a different path. Since there is too much to do, the battery consumption increases which is directly related to your usage of the device and yes, there is nothing abnormal here that you can blame. Thus, overusing the device can cause the battery to drain quicker than you think so have a look at it and use the phone in short snippets that you can extend the screen-on-time as well as the standby duration. You can check out Settings >> Battery >> View Details where you must get information on the amount of battery consumed and by which app so that you can take necessary actions.

Find out if apps are misbehaving/conflicting

A lot could go wrong when it comes to apps. For starters, it wouldn’t be the first time an outdated app attracts a bug or virus causing it to consume more than average battery backup. You can obviously check it out via Settings >> Battery where you must be able to get a glimpse of battery consumption and a historical data of which app consumed how much of the battery backup. This is where you can take necessary actions like reducing the use of battery-hungry apps that are must on your system while uninstalling or disabling those battery-hungry apps that you don’t want. Also, check out for app conflicts which are when the system faces crashes and that is something that happens when you download a new app unleashing ordeal against all the apps installed before.

Shut down all the apps

This seems like a logical method wherein you simply shut down all the apps at once and get rid of the battery draining problems induced by apps in background and foreground. As you have an Android smartphone, you can shut it down via tapping the ‘recent’ menu and closing all the apps that aren’t required for now. Next is to visit Settings >> Apps >> Running and ‘Force Stop’ each and every app if not needed at the moment.

Based on the usual fact that Android smartphones have too many apps including both pre-installed and third-party, you need to know that if there are too many apps, the battery consumption will increase accordingly. This is because even though these apps are just installed and some of them wouldn’t be ever used, some apps have the tendency to run in the background thereby consuming the resources that would otherwise satisfy other apps that you truly want to use.

Although airplane mode is made up to block any cellular and Wi-Fi (temporary) network, it is a good practice when it comes to Teclast battery draining problems. You need to know that airplane mode will actually save a good chunk of your battery that you can enable when you don’t expect network such as whilst traveling or don’t want to be hindered with calls and texts such as when in a meeting or doing any presentation, etc. There is more than one way to use this method to use it thoroughly and it will save a good chunk of the battery as said.

Turn off connectivity services when not needed

Do you remember if you turn off Wi-Fi after you are done with your work on the internet? If the answer is you didn’t turn it off, this becomes a loophole in the battery draining problems that we are discussing right here. The thing is simple, whenever you keep the Wi-Fi or Bluetooth or NFC or even GPS enabled when not in use, it is still consuming battery in the background and that adds stress draining the juices gradually and contributing to the said battery draining problems. A quick way is to drag down the notification panel and turn off these services right away.

Based on which site you refer, there are different ways to maintain the efficiency of a battery if it is draining too quickly. Note that the basic idea behind maintaining a battery is to extend the screen-on-time which is essentially how much the display is enabled while a standby duration dictates the battery backup right from fully charged to NIL. Many experts recommend keeping the battery between 50% to 80% which is essential to keep the phone fed up optimum battery life.

A group of experts recommends letting the battery drain completely before recharging it to its full extent and repeat this every time the battery has drained to NIL. But there’s also tips on how you can pull off 90:10 or 80:20 proportion wherein the upper limit is the amount of battery you can charge up to and the lower limit dictates its lower limit of drainage.

Based on the type of display, the battery consumption changes where OLED displays are prone to consume more battery power than others. Anyhow, for any type of display, there are display settings that will bring down the energy consumption. Starting with the brightness settings, you can lower it and tweak it to best view the display without stressing onto the battery. Then there is a ‘sleep’ duration that dictates what time should the display go off in case of inactivity so pull down the lever to a minute or so. Next, we have Always-on Display that you can toggle and turn off the reduce the stress on the battery.

Next time when you see an outdated app, you better update it right away. This is because apps have a tendency to attract bugs when it is not updated when there’s an update available as it strengthens the wall against any bugs or issues that might have occurred. You can check out if the updates are available or not via Google Play Store >> My apps and games where you can update all the apps at once or update them individually. On the other hand, you can upgrade the firmware as well if there’s an update available with it.

Clear all types of cache

You wouldn’t know if cache files lurk into the battery and munch on its juices while you were busy finding out what’s wrong with the battery backup. Cache files are stored by the system as a temporary method to achieve faster retrieval. However, this can be problematic which is why you need to figure things out to fix it and what’s better than deleting all types of cache files from your system right away and there’s no side effect either.

You can delete storage cache files simply by dipping inside the Settings app and checking out Storage >> Cache Memory and voila, delete it and it’s done. Moving towards the second type of cache files that is app cache which you can delete via Settings >> Apps >> Downloaded where you tap on each app individually and get rid of the cache files. Finally, the third method revolves around fixing the cache partition for which, you’ll need to direct into the recovery mode and wipe it off.

This is what you can do to prevent the Teclast battery draining problems if indeed caused by any software failure or else you can refer the last method for further assistance.

To restore the phone, you can simply turn it off and press power plus volume up button to set it in motion. Next thing you need to do is to wait for an Android logo to show up and that is when you can let go the buttons. Once you are active on recovery mode, you need to scroll down to select ‘wipe data/factory reset’ and confirm by selecting ‘yes — delete all user data’ and that must resolve the problem for sure.

Maybe you have figured out the way to fix the problem or maybe not, but if you feel dubious with it, you need to walk into a nearby service center to get the phone tested for any abnormality and get it fixed up.