Unlike most other video games, Mortal Shells puts you into a boss fight before you even step into the main elements of the game. The boss that you fight with in the beginning is Hadern, that too during the tutorial. It isn’t necessary to beat this boss. However, if you wish to win the fight, you’ll get some reward. Boss fights, in general, aren’t easy, and this is the same case with the boss fight with Hadern.

If you already got into the fight and are struggling to see the other end, then you certainly need some help. Below is a definite guide that’ll take you through everything you need to know in order to win the boss fight against Hadern in Mortal Shell. In the guide, we’ll dig into what you have to do to win the fight as well as a closer look into Hadern’s special attacks. So without any further ado, let’s look at the Boss guide on how to beat Hadern in Mortal Shell.

How to Beat Hadern in Mortal Shell – Boss Guide

The first thing you need to focus on is your weapon and the distance you maintain from this boss. The sword that you use to fight Hadern only has a close-range impact. This means that you’re gonna have to stay pretty close to the boss. This leaves you vulnerable unless you maintain a fair distance and master moving quickly. Just get in range when you have the chance to attack the target. Get out of range and maintain a fair distance when the boss starts to make use of his opportunities. 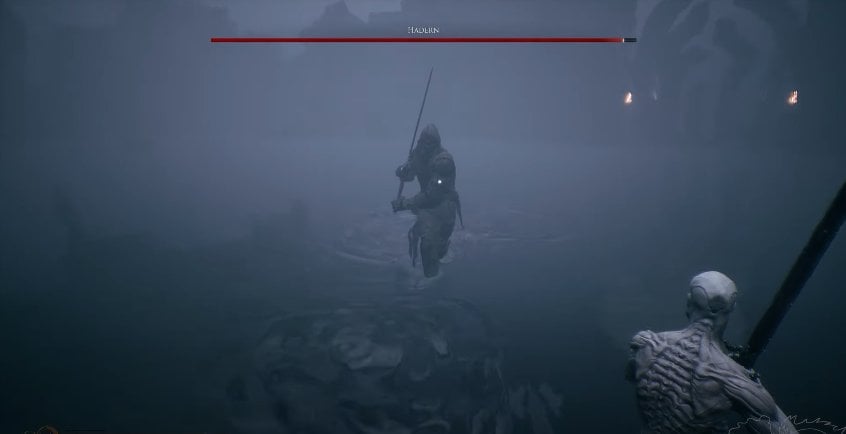 Dodging is a really useful action while fighting. This is an important fighting action in almost every game that involves fighting. Whenever you get the chance, dodge Hadern’s attacks and move behind him. This way, you’ll get to put in a few hits on him from the behind. You also have the option to harden yourself. If you feel like you’re somehow trapped or don’t see the opportunity to dodge, harden yourself. When he’s done with the attacks, back off, recover, and then get back into the fight.

Hadern will use 3 different styles of attacking. The first kind of attack he’ll perform on you is when you try to maintain a distance from him. Who you try to do this, he’ll leap at you. However, this attack of Hadern’s is pretty easy to dodge. So always remember this attack whenever you’re maintaining distance. The second attack he’ll use on you is his weapon’s Mechanical Spike skill. By dashing backward, you’ll easily manage to dodge this one as well.

Finally, Hadern has a 3-hit combo attack up his sleeves. Out of every kind of attacks that’ll he try on you, the 3-hit combo will cost a great part of your health. So it is vital that you dodge this attack by Hadern at any cost! Keep dashing backward whenever he performs the 3-hit combo and you’ll manage to dodge it effectively. Just try not to get hit with this attack and you’ll have a fair chance of winning the fight.

When fighting with Hadern in Mortal Shell, the key is to remember the points given above. Dodging is an important step to apply in this boss fight with Hadern. The 3-hit combo attack is important to avoid, which if you succeed at can provide you with a better chance of defeating Hadern in Mortal Shell. That said, we hope reading the article above has equipped you with some bit of information. Please let us know by commenting down below if you have any further queries regarding the same.