GPS is one of the most widely used services on a smartphone and since we rely on GPS a lot then you can expect, any GPS Problem can throw any task off the rails. This is because apps have integrated the use of GPS to detect user location and provide sound services based on that which is way accurate than typing a zip code of the area you live in. All things from ordering a cab to food to checking out the attractions and sightseeing spots to ATMs, Hospitals and more. You can check out the quickest way to the destination, check out the traffic, or search for spots that might interest you and there are numerous other activities that you can do simply by turning on the GPS and guess what, it is totally free and you don’t have to pay a single penny. 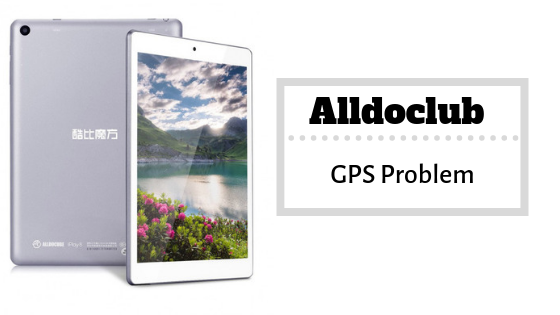 What is GPS and how does it work?

Global Positioning System or GPS is a consortium of tens of satellites that are stationed and orbiting the Earth in geostationary orbit. They relay crucial data to the GPS receivers and in this case, your phone is a GPS receiver which is then deciphered in order to find user’s location and all related services. Smartphones use GPS satellites as well as cell towers to accurately pinpoint user location, however, interference between the receiver and the sender can cause the results to vary not from that much to a lot. Since there are many aspects involved in its working, GPS problem on a smartphone is imminent in some cases where it will surely throw all your efforts off the rails if you solely depend on it. This is why we have curated a list of to-do’s so that you will be familiar with what you need to do in case of any GPS problem.

How to fix Alldocube GPS problem?

The first thing you could do to get the GPS start working again is to restart the device hoping that it works. Note that rebooting the system relieves it from stress as well as temporary software glitches that might have occurred when using GPS on the phone which is why you need to reboot the device once a day. You’ll see a significant improvement in the performance as well.

We might not be able to fully explained why it works but the bottom line is, airplane mode works. You can simply toggle it ON, wait for a few seconds or so and deactivate it and check if the GPS problem is restored or not or else move to the latter procedures prescribed below.

Airplane mode didn’t work? It’s time to toggle GPS on your device for which, you need to repeat the same procedure as airplane mode but this time, click on GPS or Location icon to get it working. You can also work near open space or near the window if the location is slightly off-centered.

There is a high-accuracy mode on your device that takes assistance from both GPS satellites and cell towers to detect user location accurately than just with the help of GPS satellites. This will increase the power consumption for sure but it will pay off once since you can easily detect the location and all other related results accurately and turn it off in your will and thus saving power.

Next method in this GPS problem troubleshooting guide is to clear the Google Maps cache or say any other mapping service you use at your disposal. These apps collect cache files which enable faster retrieval of data but these files are easily corruptible and vulnerable to bugs which can impair Google Maps or so which is the reason why we recommend our users to simply get rid of these cache files. You can do so by proceeding to the Settings >> Apps >> All >> Google Maps where you need to click on ‘Clear Cache’ and ‘Clear Data’ and its clear.

Now that you have purged cache files of Google Maps app, let’s repeat the procedure for all downloaded apps here since cache files as said, are vulnerable and since must be deleted from time to time. Follow ‘Settings >> Apps >> Downloaded’ where a list of apps will appear. You can tap on each of them individually and press on ‘Clear Data’ and ‘Clear Cache’ to get the procedure done. Repeat the said procedure for each app in the downloaded category.

Even if you decide not to update all the apps which is wrong as we will be explaining in detail in the next step. Let’s concentrate on why you need to update the Google Maps app at least. Google Maps is huge and it gets frequent updates every now and then that you must install as it brings along a bunch of new features, UI changes and most importantly, bugs that might have appeared or occurred or exploited by hackers or so. Updates prevent such a fate thus, you must update Google Maps at least to get rid of any bugs that can cause GPS problem in this case. You can update it via Google Play Store >> My apps and games.

Fix any bugs via app updates

If you have read the definition underneath why updating Google Maps is necessary, the same goes for all the apps installed on your phone irrespective if they are bloatware or third-party. You’ll find app updates via Google Play Store >> My apps and games.

Next up, we need to update the firmware of the device as well which is indeed a piece of software. You can do it about simply by diving into the Settings app and then, go to About Device >> Software Updates >> Check for updates.

Scrutinize the phone via GPS Essentials

GPS Essentials or GPS Status & Toolbox are two handy apps that would help ascertain if the problem is software related or hardware. SImply install it from the Google Play Store and open it. Here, you’ll see a number of options, click on ‘Satellites’ from the menu. This screen will show a roundup of satellites around the receiver where you need at least four to detect user’s location on Earth and since they are always in sight if you see a less number of satellites, it is possible that the problem is hardware related. On the other hand, if there are abundant satellites displayed on the screen, it could be probably a software problem that must be fixed any performing a factory reset.

A GPS antenna is already built-in on your device but what if it is damaged or facing interference or doesn’t perform efficiently? You can grab an external GPS antenna that must be able to satisfy this need since it will increase the GPS signal reception and thus, it will prove worthy after a short investment.

Seek help from a professional

The last resort towards fixing GPS problem is to report the said issue to a service center and probably pick an authorized one where you’ll get a resolution to the issue and the warranty of the device, if it exists, will stay intact. On the other hand, a third party service center would be a cheaper alternative but will nullify the warranty on the device as well so you need to take a decision keeping these things in mind.