It’s no doubt that phones tend to suffer from overheating problem when subjected to heat or extreme usage or it could be triggered after a virus or bug making a mess into the system. Although smartphones ‘heat-up’ when the processor and other components are working in conjunction to get things done, they are often accompanied by temperature throttle systems or if it’s a gaming, premium or flagship smartphone, it could be fitted with liquid cooling or vapor chamber that allows it to dissipate heat faster than usual thereby bringing the temperature done as fast as it could while the processor is working extremely optimally such as when rendering Photoshop or when you are playing a graphics-intensive game or a resource-sucking application such as movies or video streaming app and others.

But since not all smartphones have the same cooling mechanism while a majority of smartphones don’t have the mechanism in the first place, taking care of the phone is crucial. Extreme temperature can actually cause physical damage to the smartphone as it could burn any heat-sensitive component or cause it to short-circuit or it could damage the display or any other part, etc. That’s where this explicit guide on how to fix Allview overheating problem come into play so go through it and follow the methods to get clear of any overheating problem. 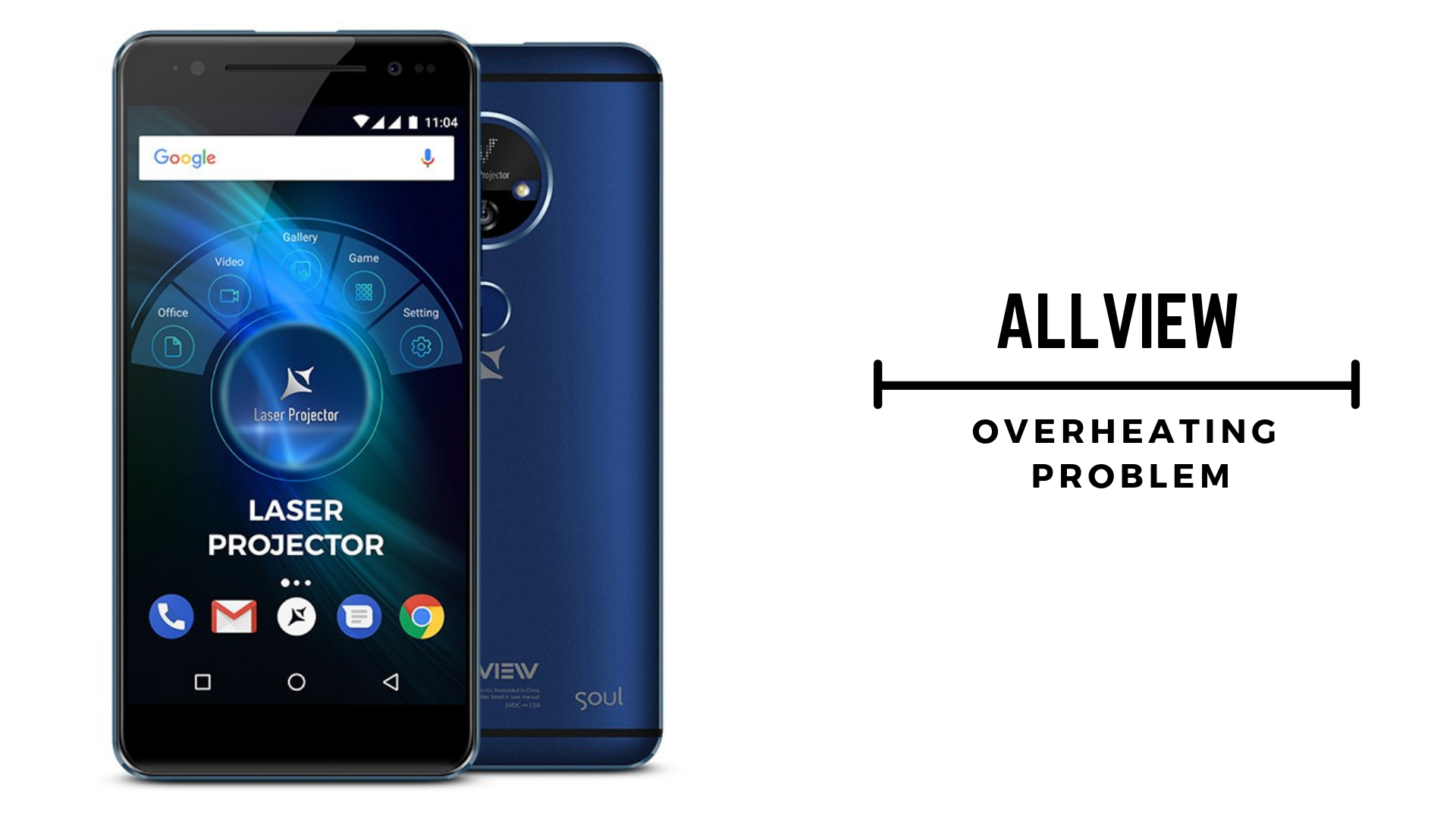 How To Fix Allview Overheating Problem?

This is preferably the first thing you should keep in mind. This is because when you use an app, it consumes resources such as the processing power, RAM, storage, and battery to name a few. When the work is done, heat is generated and the heat is then dissipated via the various cooling mechanism. However, sometimes either the temperature becomes too high which is a byproduct when you are using the phone too much or at a long stretch at once or if the cooling mechanism fails or a virus or bug or malware. This is where stop using the phone method comes into play. Just stop using the phone and keep it aside.

Every device has a different specifics when it comes to their susceptibility to getting overheat and at what duration so here’s a generalized solution. I would use my smartphone to work or play movies or play any game, etc for 20 minutes at a stretch at max and then give it a rest for 5 minutes. If you feel as if the phone is getting warm even before the clock hits 20 minutes, simply stop using the phone and keep it aside and wait for it to cool down. This will enable you to use the phone to its maximum capacity although with a timer but ensure that the overheating problem doesn’t cause the phone to succumb to the heat.

One of the best methods you can utilize in any dreadful situation is to simply restart the phone. This is because when you restart the device, all the processes and apps are abruptly shut and the phone turns off without saving any unsaved work. This is actually helpful since all the resource that the system was hoarding or the apps were are now released. Upon startup, the system is met with all the resources it has available so it performs well and in fact, you’ll see the change in performance just after you practice a reboot.

Exit and turn off all the applications

You have a bunch of apps opened at the same time. Well, your phone can handle multiple apps at once no doubt but if there are too many apps while you have a limited RAM, processing power, and storage such as a 2GB RAM with SDM425 processor and 16GB ROM, it would be a problem handling soo many apps at once. And since we don’t actually use more than a couple of apps at once, opening a number of apps isn’t worthy as well. Doing so drains the battery while contributing to the overheating problem as a byproduct which is why you must avoid doing it. I would recommend users to simply close apps that you don’t need and that will take that additional stress off the system.

Turn off all the connectivity services

If you are someone who turns on Wi-Fi on their phones and let it be, you are in for a treat as it is one of the most power-hungry features and no doubt you could be seeing battery draining problems on your phone without acknowledging what’s wrong. Since this feature is also power-hungry among others, it will add to the frenzy of the overheating problem that you are already having and thus, turning off the feature will help overcome it. Similarly, there are other services such as Bluetooth, NFC, Location / GPS, etc that must be kept off if not needed.

Unlike phones that came a few years ago, today the phones are quite intelligent and packed with a wholesome feature list that you must admire. In the display settings, you will find a number of features that would alter the way the system turns on the display which is also one of the biggest consumers of battery among other resources. You can alter the brightness settings of the device as well as alter the ‘Keep Awake’ or ‘Sleep’ timer. Check out the ‘Always-On’ feature and bunch of other gags you will find within the settings.

Stay away from the sunlight or any heating element

Come on, it is a common sense that you shouldn’t let a phone out in the sunlight for a longer duration as no matter what your phone is made up of, it acts a conductor to heat and that’s when the internal temperature increases. In fact, keeping the phone out in mild sunlight can induce problem in a similar fashion which is why I usually advise phone users not to do it.

You Android-enabled Allview smartphone syncs everything from contacts to photos to videos to search history and so on. This all these tasks need Wi-Fi among other features backed by consumption of the battery, it is one of the contributing factors behind the problem you are facing on your device. I would recommend users to either turn off the ‘Sync’ or allow it to do it occasionally but not every day.

Streamline apps by removing some

Your phone is equipped with tech to support a plethora of apps but no one has ever said that you must have installed twenty apps or so because it is highly unlikely you will use all the apps daily. Since these apps are installed, they are still consuming some of the storage space among hogging onto other resources on your phone. No doubt the phone’s performance will go down considerably if you don’t keep the count of apps installed in check. Go to Settings >> Apps or Application Manager >> Downloaded and check out the apps that you want to delete. Tap on the apps individually and press ‘Uninstall’ and that’s all.

Get the apps upgraded

Keeping the applications installed on your phone updated has become a norm nowadays as the developers are constantly trying to introduce new features within the app as well as create a wall against intruders such as viruses. On the other hand, an outdated app is vulnerable to issues and that is why you should get it updated without any fail or face performance issues among others. Check out the ‘My apps and games’ section from within the Google Play Store app where you will get a list of apps with updates available. You can also tap on ‘Auto-update’ so do it automatically.

Here, the cache files are temporarily created and stored by the system in lieu of keeping the performance optimal while retrieval apps faster than usual. Apps do collect cache files in the form of app case as well as storage cache and here’s how you are gonna fix it.

Get the phone scanned for viruses/malware

The most crucial thing you need to do when facing any issues on your phone is to get it scanned for viruses and malware. This is because viruses have become advanced where they could either discourage you from using a feature or the phone as a whole while malware can trick you into submitting sensitive data and whatnot. It is quite possible that a particular virus that has been injected into your phone sucks out the battery or commands it to generate more ‘unnecessary’ power and thus, overheating problem. There are a bunch of antivirus software you can use to get it scanned and quarantine.

Get rid of the cache partition

This is where the final traces of cache files are stored if you have deleted all others by now. For this, you will need to enter the recovery mode which is a bootable partition where you can select ‘wipe cache partition’ from the given menu to do the same. First up, to clear storage cache, proceed to the Settings >> Storage and search for ‘Cache Memory’ to clear it up. Next, to clear app cache which is more of a recurring process, you need to check out the downloaded apps within ‘Settings >> Apps’ section where you tap on each app individually and ‘Clear Cache’ on it.

Update the Android OS as well

Now that you know why updating the apps installed on the Allview phones is a must, the same goes for Android OS which is actually the platform where the software meets and interacts with the hardware. You can update the Android OS in a number of fashion such as simply by checking out for available updates within Settings >> About Device >> Software Updates. Next, you can download the update file and use it to access via the recovery mode. Next, you can install custom ROMs such as LineageOS which is efficient in getting updates as well. You can also backtrack or rollback to the last version which may resolve the overheating problem as well.

Pull off a restore factory

Here comes the last resort you can deploy if nothing else is working. Before you can make up your mind around getting a restore factory, do take a backup of all the data you want and then proceed with this method.

Get the professional’s help

If the overheating problem is adamant and persists even after you have applied not all but most of the methods explained before, you need to visit a service center so that the problem can be diagnosed and a proper repair or replacement could be initiated. Note that you can either turn to an authorized or a third-party service center depending on the severity of the issue although the warranty will be intact in case of former but not in the case or latter so beware.