Imagine that you charged your battery full and just waiting to stream the latest episode of GoT Season 8 on your Redmi Note 7 Pro and Wi-Fi issues kicks in. How would you feel? I do know that it is very frustrating when Wi-Fi issues occur since a majority of phone users are usually connected to it throughout the day doing some time or watching or even listening to something or other. When the problem kicks in, it could make the internet slow or there might be no access to the internet at all. Other possible Wi-Fi issues are when it disconnects and connects abruptly, inability to detect any Wi-Fi network or when there are authentication errors and whatnot. But don’t worry because GetDroidTips is here to help fix the Wi-Fi issues on your Redmi Note 7 Pro using this explicit troubleshooting guide. 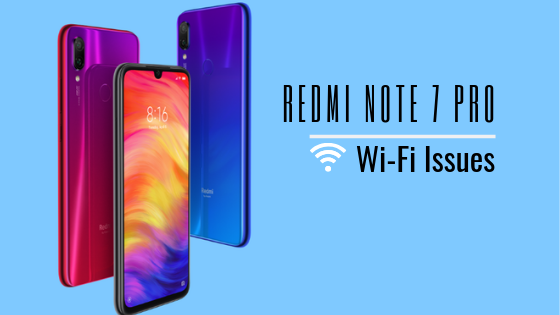 It is as easy as said. Simply restart the phone as a primitive measure towards fixing any Wi-Fi issues on your device that must work in some cases where the issue was caused due to a temporary software glitch. Rebooting the device might fix a number of issues related to network and software and thus, it comes handy whenever you feel like the phone is acting a little choppy.

May it be an issue where the phone is unable to detect an available Wi-Fi network or even if it detects the presence, it is somehow failing to register even after you have entered the right password or if the Wi-Fi keeps disconnecting randomly which is when you must toggle it a several times which is an effective method as well. Firstly, drag the notification panel and tap on the Wi-Fi icon to turn it off as you started with turned ON Wi-Fi in the first place. Next, tap on the icon several times and then check if the problem is resolved or not.

If toggling Wi-Fi doesn’t do anything to the Wi-Fi issue on your Redmi Note 7 Pro, you can call in airplane mode for that matter. This method is often hailed as an effective way to curb any network-related issue although we might not be able to tell why it works. Similar to how you toggled Wi-Fi, do the same with airplane mode and check if the feature is resolved or not.

There is no rocket science here. As the router is turned ON day-in and day-out, it tends to overwork or overload which is when you can issues like no internet access even when you are connecting to a Wi-Fi network. If you call the ISP, they would recommend doing the same as below since routers tend to overwork which is when they exhibit certain issues that can be fixed with a reboot. Go towards the router and shut it off. You need to wait for a couple of minutes before restarting the router and we hope at least this method works which are highly likely.

IS there any intermediate issue?

Considering that fact that you followed the last method of rebooting the router but there is still no internet access, there could be an intermediate issue here. Call your ISP to check if there’s some problem in your line or if they are undergoing any power failure, maintenance, or other tasks that could disrupt the internet access for a while. This includes slow internet as well since the ISP controls the bandwidth you will be getting and any maintenance or power failure could cause trouble with it as well.

Is the power saving mode enabled?

Power saving mode suppresses certain processes that can drain the battery faster which means it saves a lot of battery backup. On the other hand, Wi-Fi, as we know, is a power-hungry feature which means if the power saving mode is active, it could be suppressing the Wi-Fi as well. The simple fix is to disable the power saving mode, check if the Wi-Fi works properly or not. If yes, then you know what was the problem but if not, retreat to other methods in this explicit guide to fix Wi-Fi issues on your Redmi Note 7 Pro.

If you know that the Wi-Fi is working properly on a different phone or PC but not yours, here’s what you can do. Go to Settings >> Wi-Fi and forget the network you wanted to connect to. Next, check if there are just too many Wi-Fi networks saved on your system where you must remove a few. Next thing to do is to tap on the network you want to connect to, enter the password and check if the Wi-Fi is restored or not.

If such a message pops up on the screen whilst you were trying to connect to a Wi-Fi network, it is sure that either you have entered the wrong password or the system isn’t able to register the correct password due to any temporary glitch. The right way to fix “Authentication Error” is to forget the network, tap on connect and enter the password again. If the password is jumbled up, you can tap on ‘Show Password’ option next to the input ‘password’ field that will show the password for scrutiny. Finally, tap on ‘Connect’ and see if it works or not.

First, of up, check whether the problem is from the ISP’s end or not. You can call them or use a different phone or tablet or computer to verify internet access by connecting to the same Wi-Fi network in question. Next up, if there’s no problem with the Wi-Fi, try rebooting and resetting WPS on your router using a dedicated reset button that you’ll find behind the router or modem which must do the magic.

If this particular status remains for quite a while, you need to connect to a Wi-Fi network and long press on the same to access ‘Advanced Settings’. Here, you’ll find IP Settings on the dialog box that you can change from ‘Static’ to ‘Dynamic’ or vice-versa.

If the Wi-Fi disconnects & connects randomly

Now, this is the most annoying issue on a smartphone. Considering the fact that the Wi-Fi connection suddenly drops and connects back a while later or say it doesn’t, this particular Wi-Fi issue can be threatening as it won’t allow sustaining downloads and neither it will allow playing any game or streaming any video or audio or whatever on Wi-Fi. There are a number of reasons why it happens. First up, you need to reboot the phone to eliminate if the phone is the reason. Next up, do the same with the router. You can also keep the distance and interference metric in mind before carving a clear picture of a resolution against these Wi-Fi issues.

When it comes to Wi-Fi, the strength of the signal broadcast by the router intercepted by your smartphone depends on a number of factors. For starters, the distance between the broadcaster and the receiver (smartphone) must be within the specified limits of the router itself. Obstacles in-between these two machines that could be anything from doors to walls or even someone standing between these machines can block the signal reducing the strength of signal intercepted by the receiver. Thus, if you see that either the signal strength is low or the internet is slow, try going closer to the router diminishing any obstacles in-between and that must help resolve the Wi-Fi issues right there.

There is an app available on the Google Play Store that analyzes the signal strength broadcasted by the router or modem in a particular area. It will clearly mark the areas with the highest and lowest strength so that you can choose the sweet spot to use Wi-Fi everything you want it to be snappy and quickly such as when streaming a movie or downloading a large file, etc. Try ‘Wi-Fi Analyzer’ app for that matter.

Apart from finding out the sweet spot to use Wi-Fi, if you are finding it difficult to use the Wi-Fi in your home on your couch or chair usually where you sit, try installing a Wi-Fi range extender. There are a number of benefits using this external range extender or amplifier as it will strengthen the signal across the house as well as allow users to use the internet while sitting even in the farthest corner away from the router although it is subjected to the setting of the amplifier.

Although cache files might not be directly involved these files have a history of contributing to issues on a smartphone. As we are finding a fix to Wi-Fi issues on Redmi Note 7 Pro, purging all types of cache files is imperative as well. You need to delete all storage cache, app cache, and finally, cache partition.

Restoring the phone will probably fix any type of issues if caused due to software or network but not hardware so beware. You need a specific protocol to enter into the recovery mode so that you can restore the phone and here’s a method for Redmi Note 7 Pro.
Step 01: Turn off the phone.
Step 02: Press power and volume up buttons together to initiate boot up procedure and hold onto the buttons.
Step 03: When you see an Android logo on-screen, you can let go the buttons.
Step 04: Use volume down to navigate to ‘wipe data/factory reset’ and press power button to select it.
Step 05: After the process is over, select ‘reboot system now’ to start afresh.

Now that we have almost finished this troubleshooting guide on how to fix Wi-Fi issues on Xiaomi Redmi Note 7 Pro, there might be still some cases where the problem could be still intact. For those who are still facing the issue on your device, you can seek help from the ISP first so that they can scrutinize if there’s any problem in the line or the router or the connection, etc. If not, you can report the same to the smartphone manufacturer (authorized service center) who will be able to diagnose the issue and carry out the resolution for it.