Smartphones as an electronic device tend to heat up when subjected to intensive workload such as when someone is streaming a movie on Wi-Fi in HD or while playing a graphic-intensive and so on. These all lead to an overheating problem in Symphony or practically any other smartphones you can ever think of. Depending upon the price range of the device, they have a number of cooling mechanisms in place, however, when the work being done is more than what the cooling mechanism can compensate for or if there’s any software glitch, bugs, viruses, or any unwanted intruders causing the system to raise its internal temperature, it introduces overheating problem which needs to be fixed right away before it could make it further damage. Well, here’s how you can use these various methods to overcome the Symphony overheating problem without any fail. 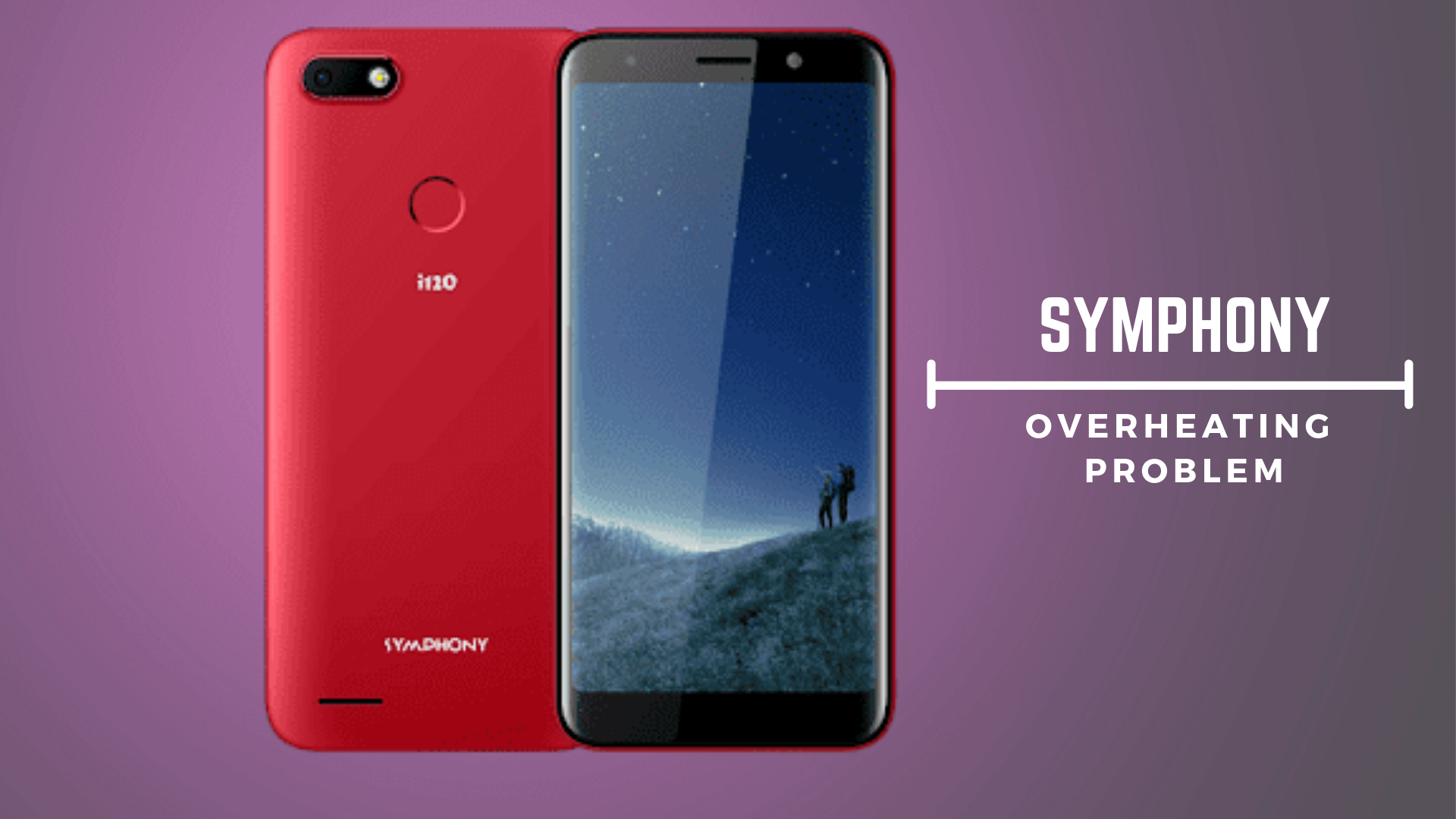 How and Why smartphones overheat?

Before diving into the fact that you can use various troubleshooting methods to overcome the issue, let’s see how is it created in the first place.

To commence with, batteries tend to move electrons across to produce power which is then supplied to the processor and other components so that it could carry out operations of any app or service that the user demands. Well, depending upon the use, the system works differently either by utilizing more power to carry out multiple apps or heavy stuff and on the other hand, the power requirement is decreased when the phone is idle. When you are playing a game or using an intensive app for a longer duration, the energy and resource surge is high and thus, the processor, battery, and all other physical components begin to work more to get things done. As per a physical phenomenon, work done is proportional to the heat being produced so the more work you do, the more heat is produced.

However, smartphones have processors equipped with temperature throttling mechanism that keep a tab on the rising temperature and take appropriate actions to prevent it from reaching a critical limit. High-end smartphones have liquid cooling mechanisms and whatnot that helps dissipate heat, however, when the heat is more than what these mechanisms can dissipate, that introduces the overheating problem and thus, can cause physical damage to the processor or other components if not taken care of. Thus, here’s everything you need to do to get the temperature down.

How To Fix Symphony Overheating Problem?

Bring down the brightness throttle

The display is something that contributes to the rising power requirements of the device as it is lit up almost 24 hours. The display has a throttle using which, users can increase or decrease the brightness of the display which is essential as it saves battery when decreased and consumes battery when increased. I would recommend users to find a medial position so that the power requirements are in check and thus, one of the contributing factors to the Symphony overheating problem is taken care of.

Apart from the brightness, the display settings housed within the Settings apps have a series of other tweaks that can help save battery by relieving it from excessive strain. You can tweak the Stay Awake feature so that the display will dim in seconds rather than being lit up for 10 minutes without any touch. Next, we have the ‘Always On’ feature that works by using proximity sensors in flagship and mid-range smartphones where the display is partially active and tap on it will light it up entirely.

Keep the phone away from sunlight/direct heat

We are talking about an electronic device made up of plastics, metal, etc where it’s temperature rises when there’s excessive heat. In this case, even sunlight can increase the temperature since both plastic and metal are conductors of heat and thus, it will raise the internal temperature if you don’t intervene in time. In fact, excessive exposure to direct sunlight can cause physical damage to the device or any of its internal components including the display if not take care of so beware.

Since the phone’s temperature is definitely rising, the first thing that I could think of is to simply restart the device and that’s all. When the phone is abruptly rebooted, it tends to exit from all apps and services just like that. It disconnects the battery for a while and shuts down giving the much-needed break so that the heat could dissipate and it does as well. Wait for a few minutes before restarting the phone and you will notice that it is running smoothly when it is cool.

If you can’t reboot the device due to any xyz reasons, why not simply put the phone in airplane mode. This will disconnect the phone from any cellular network and thus, bring down the work being done and so the temperature of the device as well.

Yep, that’s right there. One of the most probable reasons why a phone would overheat is when it is being overused. To put things into context, the battery when fully charged will give a few hours of backup when used continuously while giving the phone rest while extending the standby duration as well. However, when you are using too many apps at once or say you are indulging in power-hungry and intensive activities such as streaming a movie or so, this raises the power requirements as well as resource requirements. The more you use the phone, the more work is done and so is the heat produced with it. On the other hand, using the phone mildly without indulging in overusing it will actually work in your favor for sure.

Shut down all the apps at once

When you experience that the phone is getting slightly warmer than it should, it is better to shut down all apps as you can save your work before shutting it down. Doing so will actually relieve excessive stress on the processor and other components involved that will enable bringing down the core temperature. It will take a few minutes but the phone will return to its original room temperature without any hassle.

Remove case, battery & give it a rest

The heat dissipates through various channels so that the phone’s temperature is in the tab. However, when you are experience overheating problem, it literally means that the cooling mechanism isn’t able to dissipate the heat properly. It could be because somehow you are insulating the device with a phone case or cover blocking the heat to pass. If that’s the case, I would say remove the case and keep the phone aside for a few minutes. If the battery is removable, it’s well and good that you remove it as well.

Use the phone in a cool environment

You might have seen memes where people show that they use their phones within in a fridge while playing games like PUBG and Fortnite. These are intensive games and raises the core temperature of the device when played continuously. But when you are in a cool environment such as a room with air conditioning, you can expect the heat to affect less. This is why we usually recommend carrying out such aggressive gaming and streaming sessions while in a cool environment that is a room with AC and not a fridge.

Blow air through the vent if needed

I know it sounds weird but it could help. I mean take a second to process it. Pick up your phone and blow air using your mouth through the vent i.e. speaker vent or any other vent accessible to you. The cool air will help dissipate the heat faster and you will no longer have issues with its overheating problem since it is both aiding the phone with this problem while also providing assistance to any cooling mechanisms installed.

It is possible that either there’s any hardware failure causing the system to go overboard with the temperature. But it is also possible that bugs or even viruses have spiked up the overheating problem and that is where updating the firmware as a whole comes into play. You can check out if there’s an update available within the ‘Software Updates’ section of the Settings app.

Just the way how updating firmware can eliminate bugs and viruses, doing the same with apps installed (there are many) will have a significant improvement over the situation. You can check out if there are any updates available via the Google Play Store app where you can dig into the ‘My apps and games’ section to find it. Turn on the ‘auto-update’ feature that updates will be taken care of.

Purge all categories of cache files

One of the most obvious reasons behind Symphony overheating problem is surely the cache files. These are temporarily created files that store relevant data that enables faster retrieval process. Cache files need to be cleared every now and then as it has an impact on the system’s performance as well and you could feel the improvement once you clear it. There are three types of cache files and here’s how you can get rid of them all.
App cache: For this, you need to retreat to the Settings app and proceed to ‘Apps >> Downloaded’. From among the list of apps, tap on an app and press ‘Clear Cache’. Then, back up a bit and select all other apps individually and do the same.
Storage cache: Here, you need to proceed to the ‘Storage’ section under the Settings app and check out for ‘Cache Memory’ that you need to clear asap.
Cache partition: This particular method requires to boot into the recovery mode that you can learn in the next method from Step 01 to Step 04. Finally, select ‘wipe cache partition’ from the menu to wipe it all.

Any software issue which you couldn’t find or wasn’t able to resolve using any of the aforementioned methods will probably be resolved after hitting the factory reset option. You need to retreat to the recovery mode before proceeding further so here’s how you are gonna do it.
Step 01: Turn off the Symphony smartphone.
Step 02: Press volume up and power button together for a few seconds until the phone vibrates and shows an Android logo.
Step 03: Release the buttons and take it load.
Step 04: Remember to use the power button for selection and volume rockers for toggling between the options.
Step 05: You need to locate and tap on ‘wipe data/factory reset >> yes — clear all user data’ and it’s done.
Step 06: Restart the phone, set it up and have a look if the overheating problem is fixed or not.

Call in the big guns

Unless you have cheated in-between the troubleshooting methods aforementioned, it is highly likely that the Symphony overheating problem is gone by now. Anyways, if indeed it is still intact, you need to call in the big guns i.e. a technician possibly from an authorized service center by booking an appointment or walking in at the center to get the problem sorted. On the other hand, you can report the issue to a third-party service center as well where the repair or replacement will be fairly cheaper but will void the warranty so think well before choosing one.