Hyper Scape is an online first-person shooter free-to-play battle royale game that’s developed by Ubisoft Montreal and published by Ubisoft. It’s integrated with Twitch so the interested people can stream the live gameplay which allows viewers to become eligible to play the game. There are a couple of bugs and errors available in the game which should have fixed now as the Hyper Scape 0.3 Open Beta Update Patch Notes has been released officially by Ubisoft.

So, the July 12, 2020 patch notes can be found on Ubisoft’s page that we will gonna link below. The Hyper Scape game is available now to download as the open beta. Just sign up/in with your credentials or social login and you’ll be all set. Well, before downloading the game, we’ll recommend you to read the full patch note below so that you should know what’s new or updated, etc.

According to Ubisoft, this patch comes with a lot of new content & multiple improvements that were available in the game previously. It also improved the stability of the game. However, it’s in the beta build and may have some other bugs or issues that may appear to the players. Now, let’s take a quick look at the patch notes. 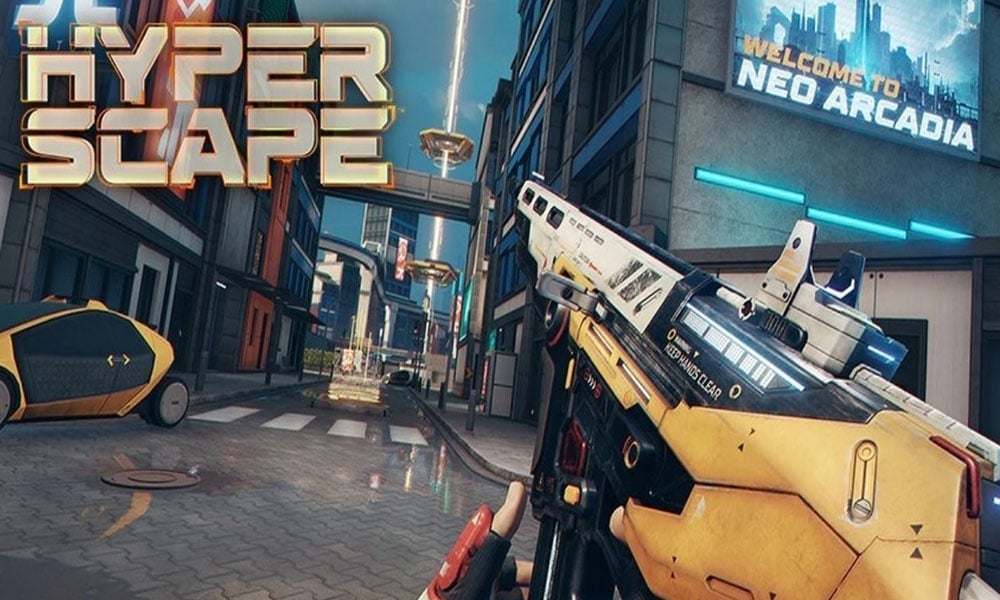 Many of you asked when we would release new weapons, here’s the first one: The Harpy is an SMG capable of doing large damage at short range. It has a limited magazine at low fusion level but a fast reload speed. Like for other full-auto weapons it gains ammo capacity with each fusion and an extra damage at full fusion.

The Harpy is intended to be a fast, mobile weapon, with no extra spread penalty for sprint/jump.

The change on damage from patch 0.2 (released during our Tech Test) showed positive effects but the Salvo is still too dominant in close combat/indoor situations. Although the intention for this weapon was always to be easy to use, we believe it is currently overused in random carpet-bombing techniques.

The proximity detonation radius will be reduced to make the projectiles more avoidable in close quarter combat. We will monitor this change closely in the first days of the Open Beta.

With this patch, we also introduce a new Hack: The Shockwave. This versatile Hack allows you to trigger a ranged AoE shockwave that will propel players in all directions. The Shockwave does a bit of damage, less than Slam, but the ranged aspect opens new possibilities. It also offers a traversal ability if you aim at your feet, you’ll be sent flying into the air. Fusion will lower its cooldown and full fusion will also add extra damage.

Shockwave is the fastest Hack currently, with a minimum Cooldown of 4s at full fusion.

A new Game Event has been added for Twitch Viewers through the Crowncast Extension: The Haste Event. Once chosen by viewers it will boost the navigation speed of all Contenders for a while. It is cumulative with any other speed boost given by Melee or any other ability and will affect Echoed Players as well.

Haste is Viewers-exclusive: It can only be chosen by Viewers that are watching the match with the Crowncast extension.

Low Gravity has been quite popular among Viewers (perhaps less so for Streamers) and created many unexpectedly epic in-air combat moments. However, as with all good things, moderation is key. As we add new Game Events to the game rotation (like we are doing with Haste), Low Gravity will naturally come up less frequently. Still, we think its current duration is a bit long and we’ve decided to reduce it for now, until more Game Events are added.

Keep in mind however that this Game Event is Viewers-exclusive: Low Gravity can only occur when one or more Streamers are present in your match (or you’re a Streamer yourself and your viewers like to see you fly)

The rules are unchanged, including the Crown. If you decide to go for it, you’ll have to defend yourself alone!

We’ve read many comments about possible exploits or repetitive/annoying (“cheesing”) winning strategies during the Showdown, when players run away with the Crown. We intended Showdown to be a tactical & intense moment, but we want to make sure chasing the Crown bearer is not a frustrating experience. We also want to make sure that picking up the Crown still offers a chance to win, if you play well and/or are well supported by your squad.

With this patch, we are introducing new mechanics designed to rebalance the Crown. We will monitor closely their effects on the game and adjust rapidly if necessary, to ensure Showdown stays a fun & creative moment.

We’ve made the ammo pickup more generous in the game. The fast pace combat often leaves players with little ammo and we think reaching full ammo capacity was a bit slow. We are still working on solving the lack of ammo with the initial weapon pickup at match start, but it’s a first step.

Player’s max ammo capacity is unchanged, but they will now need less pickups to reach it.

The Weapon Swap (the action of swapping one of your two weapons with another on the ground) felt too slow for several players (including Graeme, our producer, who happens to be a very persuasive person). We agree that the overall pace of the game requires more reactivity for players trying to adjust their loadout. While the weapon swap is still a HOLD interaction (to avoid involuntary swaps) its duration has been reduced.

Please note that we are only reducing the HOLD interaction duration. The weapon swap animation is unchanged, but keep in mind it is interruptible: If you shoot or go in ADS you will interrupt it instantly.

Also, several of you suggested using for weapons the same swap menu used for hacks. We will continue to monitor this aspect of the game in the future.

Viewers on Twitch will now be able to progress their Battle Pass simply by watching their favorite streamers! If you’re watching Hyper Scape streams that have activated the Crowncast extension and you have linked your Uplay account, you will be able to claim Battle Points at the end of each match. Thanks to the Crowncast version of our in-game scoring system, the more you watch & interact with the game, the more points you’ll get. Battle Points and all items unlocked will be available as soon as you return to Hyper Scape.

We have set a daily cap to the maximum amount of Battle Points you can get by watching on Twitch, to ensure playing the game remains the best way of leveling up. However, we will closely monitor this cap & the points gained to make sure it feels rewarding to watch Hyper Scape on Twitch.

Important Note for Console Players: While Open Beta is only available on PC, you can make use of the Crowncast Battle Pass progression to unlock all the items contained in the OB Battle Pass, which will be available on your account when we release on Console, thanks to our cross-progression system. So, go watch streamers on Twitch and unlock all the exclusive Open beta rewards!

Thanks to the Crowncast extension, streamers can now invite viewers directly into their 3-player squad with a few easy clicks. If you’re watching a Hyper Scape stream, the streamer can send you an invite. If you’re logged into the game, you can accept that invitation and if confirmed by streamer you will join their squad instantly! No need to use the Uplay friend interface at all!

A new Free Battle Pass with 30 tiers is available for you to unlock Open Beta exclusive items. All items are new compared to Technical Test. You can level up the Battle Pass by playing matches & completing challenges, but don’t forget you can now also level up on Twitch by watching streamers with the Crowncast extension.

AS WITH OUR TECHNICAL TEST, ALL UNLOCKED ITEMS WILL BE KEPT IN YOUR INVENTORY AFTER OPEN BETA.

Starting with this Open Beta, any user BattlEye detects to be using game hacks or cheat programs will have their Ubisoft account automatically banned from the game, and their PC will also receive a Hardware ID Ban to prevent them returning to the Hyper Scape with another account.

Technical Test players likely observed an issue trying to revive teammates where the action does not complete. It’s in fact a two-part issue, one related to specific geometric positioning of the Restore Point, and the other with the action itself getting interrupted. This patch addresses the positioning bug, with the other to be addressed in a future update.

Enabled texture streaming on Weapons & Characters to prevent out of memory issues.

Fixed an issue where players would receive an invalid “orchid-C015” issue when entering Matchmaking.