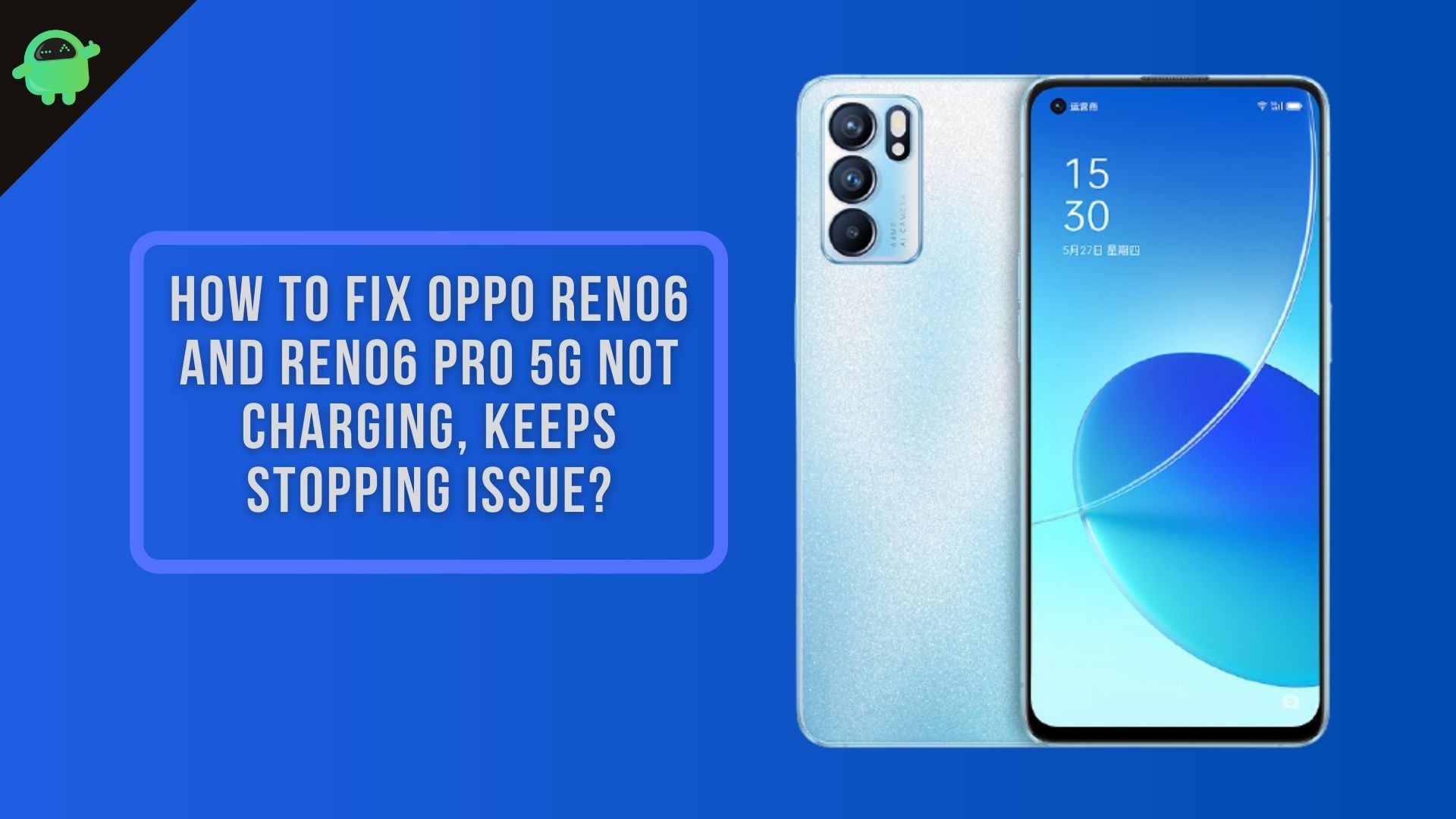 What is Oppo Reno6 and Reno6 Pro 5G Not Charging Issue?

To summarize, you need a charged battery to do anything on your phone from calling to texting to browsing and so on. However, without a charged-up battery, your phone is no longer useful. We received complaints about Reno6 and Reno6 Pro 5G not charging or charging keeps stopping issues of late.

Since your phone stopped charging or does so in an abnormal way making it difficult to charge the battery for a longer duration of time, you cannot expect to keep up with it. When it comes to charging keeps stopping issues, it essentially means the phone is unable to charge in one go or if it keeps dropping the charge in-between a charging session.

The problem can be many such as broken charging port to outdated firmware to faulty battery and so on. Thus, you need a plan to react to how to fix the issue. Here are all the troubleshooting methods you’d need to cope up with the issue.

Here, I have started with analyzing the software-related issues preventing the Reno6 and Reno6 Pro 5G battery from charging or causing any other sort of issues. Post that, there are a few steps to diagnose if the battery not charging issue is due to broken or out-of-work hardware components so read along.

This is a standard troubleshooting method that you’ll find pretty much everywhere. Apparently, once you reboot the system, it shuts down all the apps and processes, clears cache and memory, and other allocated resources. Along with it, the reboot also straightens out minor software glitches that caused problems when you tried charging the phone the first time around.

There’s no science on how to reboot Oppo Reno6 and Reno6 Pro 5G (or any other smartphone). Long-press on the power button to reveal the options to reboot or shut down the phone. Select the latter if you can spare a few seconds but the former one works too.

You plugged the phone into a charger and suddenly, the phone’s screen froze and it is not charging at all. The phone may get extremely slow when paired with a charger. A forced reboot can work wonders. Here’s how you can do it.

Outdated firmware can cause issues with charging the battery as well. You need to upgrade to the latest available patch via Settings >> Software Updates. Note that not all smartphones will have updates so relax if you don’t have it. You can always use workarounds like employing other methods listed here or install custom ROMs to get frequent updates.

Cache files speed up the process of retrieving apps/website, however, they are prone to get corrupted since cache files are temporary and are overwritten repeatedly. It will not be surprising if cache is causing the Oppo Reno6 and Reno6 Pro 5G Not charging or battery keeps stopping issue because it can. The fix is to get rid of app cache and check if the problem is resolved or not.

From a software point of view, this is the last thing you can do to fix Oppo Reno6 and Reno6 Pro 5G battery not charging or keeps stopping issues. Henceforth, you will see hardware-related pointers so do try this method first. Note that you should keep a backup of all the data you have stored to prevent any data loss since performing a restore factory will wipe off all the data from your smartphone in a heartbeat. Follow the instructions below to go through with it.

Note: If restoring the phone doesn’t help in your favor, there’s a huge possibility that the hardware component related to the charging process is at fault instead. Now, there are a few components involved from the IC on the motherboard, charging port, the USB cable, and so on.

Check if there are any signs of liquid damage

This is probably the first thing you should look out for. Your phone irrespective of what make or model it is (unless it is waterproof or water-resistant) will get water damaged when in contact with water. I am talking about water coming in contact with the ports, buttons, and other openings alike since splashes on the screen or back panel won’t do much damage.

If yes, you need a fix right away. If not, proceed with this guide to verify if other hardware components might be damaged or not.

Check for debris in the charging port

The first point of contact between the battery and the charger is the charging port on your Oppo Reno6 series smartphone. Wear and tear can cause it to suffer breakdown over time or it might lose the ability to connect with the USB cable that you will be connecting to it for charging purposes.

Another problem is the debris. Dust, lint from pockets, and other minute particular can harvest inside the charging port making it difficult for the charger to charge the battery since the contact between the USB-C port on the device and the port on the charging cable which latches to the USB-C (on the device) is broken or disturbed.

Take a torch and I am talking about an actual torch because the flash of a smartphone is, as said, diffused and thus, you won’t be able to see inside the port properly. If there’s debris or any unwanted item inside the port, take a needle or a toothpick and use it to extract the lint and other substances. Don’t try too hard as it could damage the metal contact in the charging port rendering it completely useless. Check if the battery not charging issue is sorted or not. Proceed to diagnose the problem to the next part of the process i.e. the USB cable.

Another hardware component to diagnose is the USB cable. No doubt it is one of the most abused hardware as users tangle it, stretch it, push and pull it, twist and turn it, and whatnot. Although these cables can handle common wear and tear, breakage or cut in the wire can prevent the electricity flow from the charging brick to the device and thus, preventing the phone’s battery from charging.

If you are facing difficulty in charging the phone’s battery, the USB cable may be at fault. It becomes apparent if you had to hold the cable in a certain position so that it can charge the phone or else it doesn’t. In the latter case, the cable is likely defunct so you need a new one. For all other cases, try switching the cable with another one (new or used) to verify if the cable is at fault.

You can even bring in a separate phone and use the existing cable to charge that phone to verify if the phone charges or not. If yes, the cable is not a problem but it is likely the port. If it doesn’t start charging, it is either the cable or the brick at fault.

You analyzed if the USB cable is at fault but found it to be working properly. Next is to verify if the charging brick is at fault. Simply use the same brick plus cable contraption on a different phone and monitor if it charges or behaves abnormally. If the results are the former, there’s something wrong with the phone and not the charging brick. If the other phone begins to charge and behave abnormally, the charger is likely the culprit. On the other hand, try charging your phone but with a different brick. The answer is simple, if the phone starts charging, the original brick you were using was faulty.

Turns out using a third-party charger can trigger similar situations in some cases. Thus, I recommend using the charging brick that comes with the phone to charge it. If the brick is dead, buy a new one.

Is it possible that the charging outlet is faulty? Probably and if that’s what causing the issue, why don’t you try switching the outlet to see if it makes any difference.

What if your battery is at fault?

The lithium-Ion battery in your Oppo Reno6 and Reno6 Pro 5G smartphone has a specific lifecycle which is how many times it can discharge completely and charge to its full capacity. It loses the total capacity over time, say 10 percent a year, although this figure is representative and can differ greatly based on the user’s phone charging and discharging pattern.

How old is your phone? Are you a heavy or long-term user since in both cases, the battery consumption is high and thus, the number of lifecycles depletes fastly. Damage to the battery either physically due to fall or drop or liquid damage can cause the battery to underperform or even not work at all no matter how many ports and chargers you change. The only fix is to replace the batter. Turns out your Reno6 series smartphone has a non-removable battery which means you will need a professional’s help to fix it.

At the end of the day, if you are still trying to figure out why your phone’s battery is not charging (or why it keeps on dropping or stopping the charge), you need to seek assistance from a technician. Every battery has a specific lifecycle and so are the times you can plug in the charging port or use the cable since everything undergoes constant wear and tear during its tenure of usage.