In Pathfinder: Wrath of the Righteous, you are just an unknown hero on a gigantic mission. Your goal here is to put an end to all the demonic characters who killed a legendary dragon and are creating chaos around the world. But approaching your enemies empty-handed is nothing but conceding a suicide itself. You will need to wield something powerful enough to destroy your enemies and carry on your adventure. Luckily, you will come across a whole lot of weapons that will help you achieve your goal.

Again as we talk about weapons, Pathfinder: Wrath of the Righteous provides 56 different weapons to its players. And since each weapon possesses different kinds of powers, you will certainly find some to be extremely useful while some might seem a bit weak. But what you actually need here is something that contains colossal power and also turns into a reliable option in any situation. Today, we will be looking at some of the best weapons in Wrath of the Righteous that will definitely help you throughout your journey. 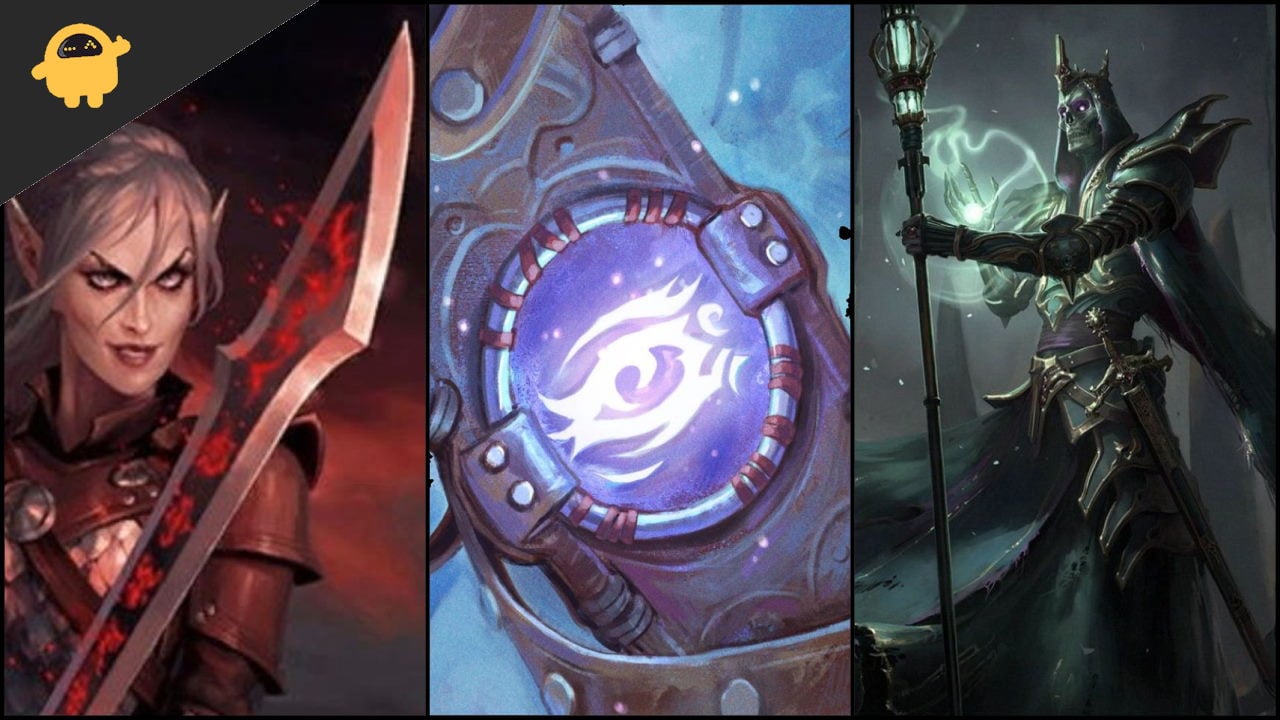 Out of all the 56 weapons in Pathfinder: Wrath of the Righteous, here is a list of the top-notch weapons that will help you take down those immensely powerful extraterrestrial creatures.

Simply a greatsword with incredible damaging power. Blood Red Cleaver might not be as heavy as the other greatswords you will find in Wrath of the Righteous. It weighs around 8lbs only. However, that doesn’t define its strength in battle. With proficiency in martial, Blood Red Cleaver can deal heavy damage to its enemies. More terrifyingly, it deals extra damage of 6d6 with each slash through its enemies. But that is under one condition that the enemy HP must drop down below 30%.

Elemental Punisher is basically a Longbow with quite some far-fetched damage power. Compared to the average bows and arrows, Elemental Punisher can deal multiple damages including electricity damage, fire damage, sonic damage, and even acid damage as well. It has the ability to deal 1d6 damage in all its damage forms. Besides, if all that isn’t enough to kill its enemy, it can go one step further making its enemies blind with its extreme hits. 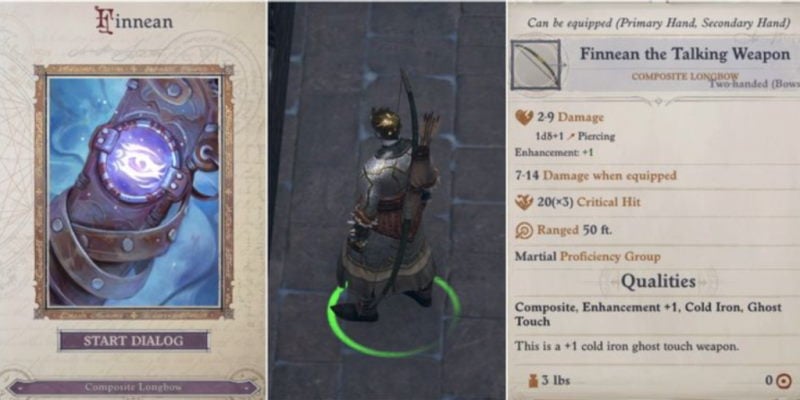 Going through some rough times on your adventure journey? Perhaps, Finnean can be the best as a companion and also as an ultimate weapon at the same time. The specialty of talking makes it more of a human than just any weapon. But unlike the others, Finnean has the ability to change into any weapon type making it one of the most flexible weapons you can ever wield in the Wrath of the Righteous. Other than this, it can deal great damage with a force of 1d6 per strike. That’s considerable stats you could expect from a weapon with such flexibility.

Next up, we have the Terrifying Tremble, an Earth Breaker with proficiency in martial. It is no doubt one of those heavy weapons you can wield in Pathfinder Wrath of the Righteous. It weighs around 14lbs and is capable of dealing some significant damage to its enemies. Terrifying Tremble basically deals in Buldgeoning type damage and every hit produces an ultrasound capable of dealing some extra damage to enemies within its range.

Mythslayer is a simple yet heavy crossbow in the game but its abilities certainly make it feel more like an ancient days missile. Although the 1d10 piercing rate of damage might not seem to be that effective but do not fall for the illusion. If the enemy on the front is a Giant, a subtype of giant, a dragon, or one with 20 or more HD, Mythslayer can deal an extra 1d10  piercing damage. Moreover, it also has 2 penalties on all of its attack rolls.

Mythslayer basically deals in Heartbreaker, Rude Stopper, or Rolling Thunder. And these are enough tricks to give you an edge over your enemies in any situation.

Surely, this name itself creates a different type of picture in our minds. But it is more of a Sling Staff type weapon that probably has the longest ranged attacks. Each attack of the Decay Spreader can range up to 50 feet, which is the longest by any weapon in Pathfinder. Moreover, its ability to gain a +2 bonus on the decay of every dead enemy is a cheeky way to collect some hefty bonuses at battles. It is because of such abilities, Decay Spreader is considered a very useful weapon, especially during boss fights.

Riftcarver, a signature weapon of one of the demon gods Deskari. It is a Scythe-type weapon that has perks like summoning demons and rifts. Although the range of this weapon might be a matter of concern, its summoning ability certainly neutralizes this drawback. You can summon the demons to fight for you and even the rift carvers play a significant role by swallowing the enemies.

Another longbow is primarily known for its ranged attacks. It would not be wrong to say that Hunter’s Blessing is specifically based on Dexterity. Therefore, if dexterity is something you highly value, it could be your go-to weapon without even a second thought. More interestingly, its +4 dexterity bonus is highly beneficial when it comes down to the numbers at last.

Spiteful Mockery is a heavy pick-type weapon that is specially designed for the witches in Pathfinder. Since it is no good when it comes to heavy damage, it isn’t one that you should wield in the early game. However, once you reach level 20 as a Wizard, it will come in handy in multiple situations. Moreover, the best thing about this weapon is that it allows you to cast the Prediction of Failure spell once a day. If you are aware of the Prediction of Failure spell, you surely know how catastrophic it can be. 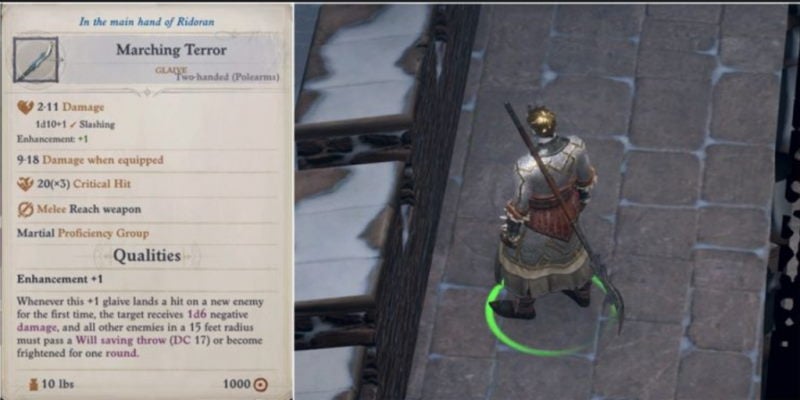 Our final choice for the best weapons in the Wrath of the Righteous is the Marching Terror. This weapon is not known for its power, strength, or radius. Rather it has a completely different purpose behind its build.

If you were to win a battle in Pathfinder, one of the most effective ways is by scaring the enemies and making them leave the battle. And Marching Terror helps you achieve this purpose. As you release the very first hit, all the enemies within its range are to pass a check. And if they fail to do so, they will be haunted by its terrors and will be forced to leave the battlefield suffering some considerable damage.

Battles in Pathfinder Wrath of the Righteous are neither going to be easy nor fair. As you start your adventure journey, you will always be pushed down to fight enemies that are far superior to you in terms of strength and power. It is only with the perfect weapon and strategy that you can win against the terrifying demons. Which weapon have you been using so far in Pathfinder? And if you were to choose one from this list, which one would it be? Let us know in the comments below.