Ebb Software and Kepler Interactive have come up with an atmospheric first-person biopunk survival horror adventure video game called ‘Scorn‘ in October 2022. The game is doing really well among the Windows and Xbox Series X|S platform gamers that literally offer deadly weapons & creatures apart from gross items which look creepy. Meanwhile, interested players are looking for the Scorn All Creatures and Weapons in the gameplay to come across them.

Well, it’s quite obvious that each creature and weapon looks so unique even after having the same kind of disturbing visuals as we can expect from a horror video game. But playing Scorn won’t be easy enough for everyone because there is specific info available for the in-game weapons and creatures in order to progress smoothly. Luckily, here we’ve tried to provide some info on the available weapons and creatures of Scorn that you can check below. 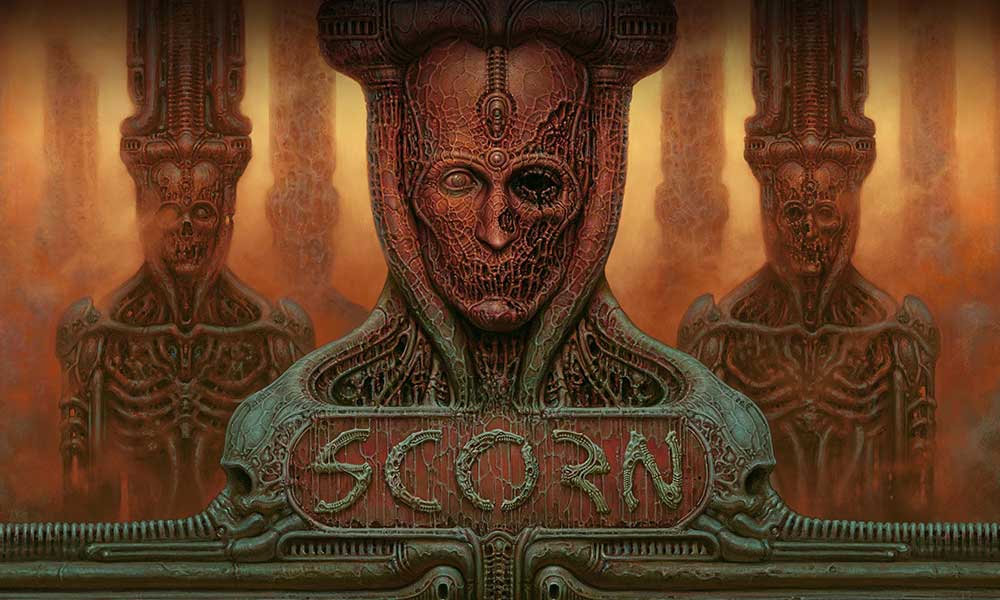 So, talking about the horrifying creatures or monsters in Scorn, you will encounter several creatures in the gameplay according to which stage you’re going through. There are assembly creatures that will be found initially in the game then more & more creatures will be available further. You can check the list below of all the inhuman creepy creatures in this game that you’ll need to deal with.

Moldmen are one of the first creatures in Scorn that the protagonist will have to encounter and take them down. These creatures are almost looking like aliens but are considered to be real-life humans who have been artificially getting into breeding to be used as fuel. Moldmen is also known as the Assembly creatures. As the name suggests, Moldmen are first molded forcefully and then left to dry out. After becoming usable packages, aliens use them as fuel. 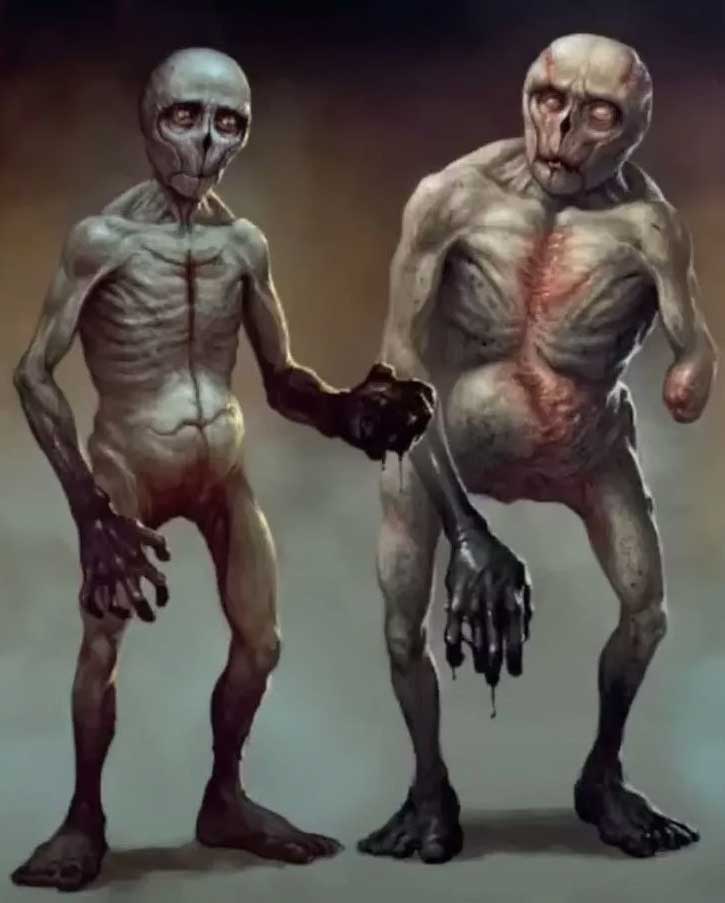 In the first puzzle, you’ll have to get into the assembly line and find out a mold person that you’ll need to save. After saving the creature, you’ll have to open the gate by using them. However, after opening the gate, they will be locked behind it with screams which feel painful up to some extent.

Drones can be found in the Assembly which should be released from their stations. They’re also coming from organic matter and feature large green bubbles. They’re considered fertilizer drones to kill mist-like substances which can hurt you as a protagonist while walkthrough. You can easily take down these drones with a few shots from your pistol. So, no need to worry. 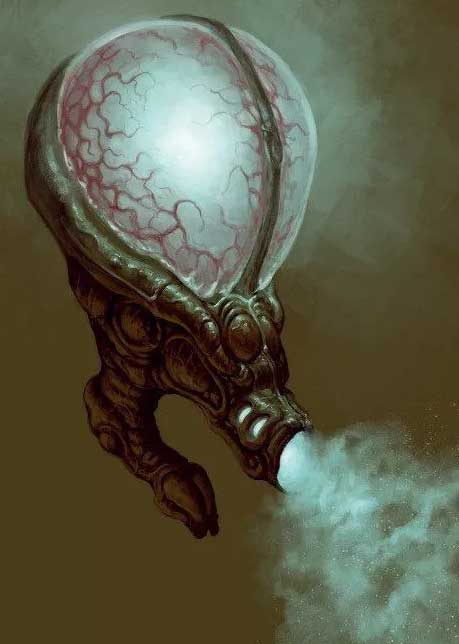 Well, Workers are also one of the first creatures that you’ll encounter in Scorn as the Crater creatures. These creatures come from the vertical hole bored into the Earth, known as ‘Crater’. They’re four-footed monsters which are also known as ‘bears’. Most of the time, the workers will be submissive enough and can be found while going through passageways and behind the doors. Once they see you as a protagonist, they’ll start attacking you. 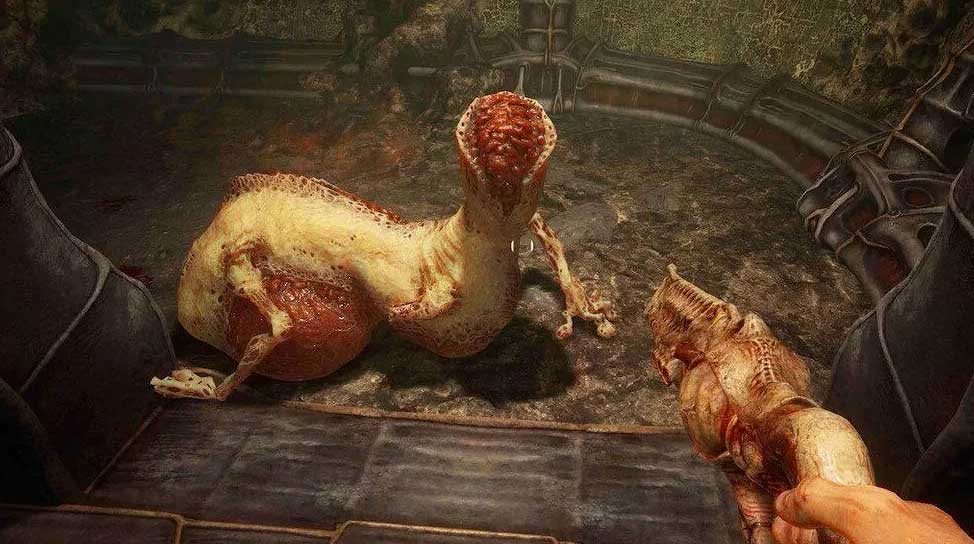 Either they lunge at the protagonist to do damage to the health or they simply start firing sharp projectiles from their chests. Sometimes they can also bite you if they’re close enough or even attack the protagonist with a red tongue-like organ. Though workers are easily defeatable creatures in Scorn, they might be powerful when comes to a group.

Though this isn’t an official name, these creatures almost look like chickens. Chickens are the second most creatures in Scorn that you can find throughout the Crater. They only shoot projectiles at the protagonist as their primary attack. You can easily defeat them.

You’ll also find out big workers in the gameplay who basically charge bulls or yaks. They’re hard to defeat that’s why dodging and sprinting will be important enough to get survived. While players must shoot twice minimum with the Riot Shotgun because using other weapons won’t be effective that much.

Homunculi creatures are made from a certain hallucinogenic matter and they’re absolutely artificial. You can also consider them as living batteries because they’re completely submissive and do not attack the player. However, once the player inserts one into a Cyborg husk, they’ll start attacking you.

Cyborg aren’t that kind of human-machine hybrids because they’re on the next level in Scorn with a grotesque twist. They’re made from dead humans and there might a mix of multiple humans in the cyborg. Designed as flesh and metal husks that can become dangerous once you insert a Homunculus into the cavity in their torsos. 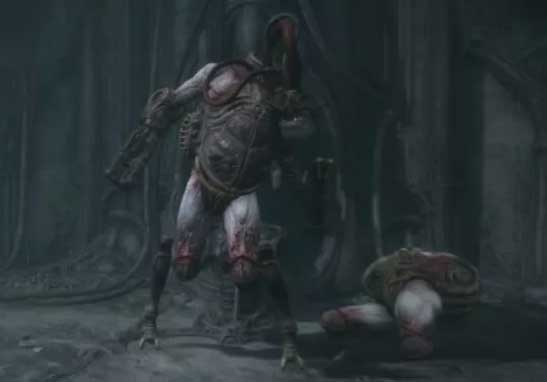 A Cyborg is the first and only major boss that the protagonist will have to fight carefully. Cyborg will follow the player in the room and shoot projectiles frequently. So, the player will have to dodge the attack and use side steps to keep moving.

Worms will be attached to the ceilings in specific rooms that shoot acid at the protagonist. They’re not that hard enough to defeat but can be frustrating. Make sure to reload the pistol and shoot at them.

It’s also known as ‘the Crater Queen’ in the Scorn Artbook which is a monster to give birth to the Crater creatures. It has an elongated neck and the Crater Queen can’t move. She moves her long neck and face to look at the protagonist. The player should have to kill the Crater Queen by slicing her flesh from three different rooms. She actually doesn’t affect the player which is a good thing. Once you put her out of her misery, you’ll get an important item that’s necessary to progress further.

Floaters are one of the Workers in Scorn who can fly with the exposed brain. Floaters are born from the heads of dead Workers. They can’t harm that much to the protagonist, so the player can easily defeat them with just one pistol shot. 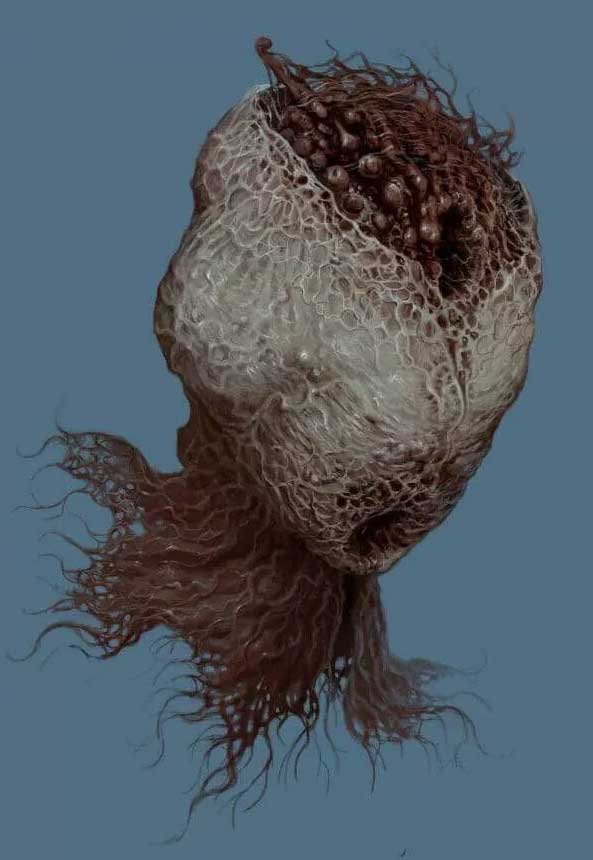 Shells are one of the creatures in Scorn that are made from gore and remnants of dead humans. They’re created by compressing the fleshes into one humanoid structure. However, the hate towards humans is so strong to handle. A Shell doesn’t have the consciousness of its original humans. Fortunately, a human can control shells telepathically. A person’s consciousness can be transferred into a new physical entity. 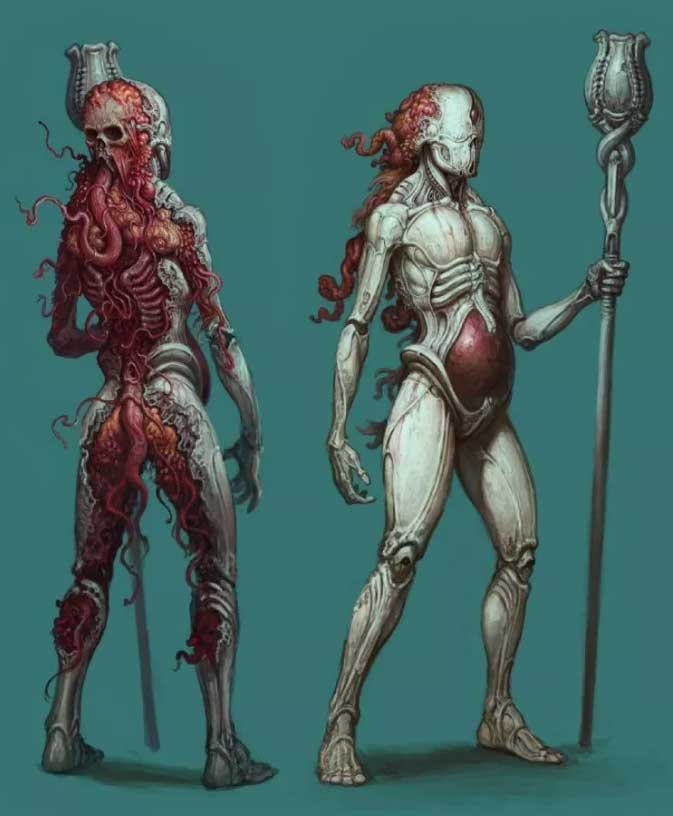 The Parasite is one of the main antagonists of the Scorn game which is the remnant of the first humanoid creature. Once a human now becomes a parasite which has an elongated reptile that attacks the protagonist. This creature becomes the player’s primary weapon and inventory.

It can hold items for the player in the gameplay but the Parasite gradually leeches the life forces from the player to survive. You the player should have to remove the Parasite at the end of the game.

Now, you’ll be able to know more about the Scorn weapons which are quite disturbing in terms of look and feel. There are almost four unique Scorn weapons that present in the game. These all fit right into Scorn’s world which looks like fleshes and skeletal outer shells. But each of them might be unique and useful enough to take down monsters as per their strength and power.

Scorn has four different weapons that need to be unlocked in the game throughout the gameplay. Such as:

Well, the Melee Prod is the first weapon that you can get in Act I-II which is a short-range weapon that fires out a damaging prod. It has two pumps inside and it can be used as a backup weapon to the core weapon once you get additional guns. 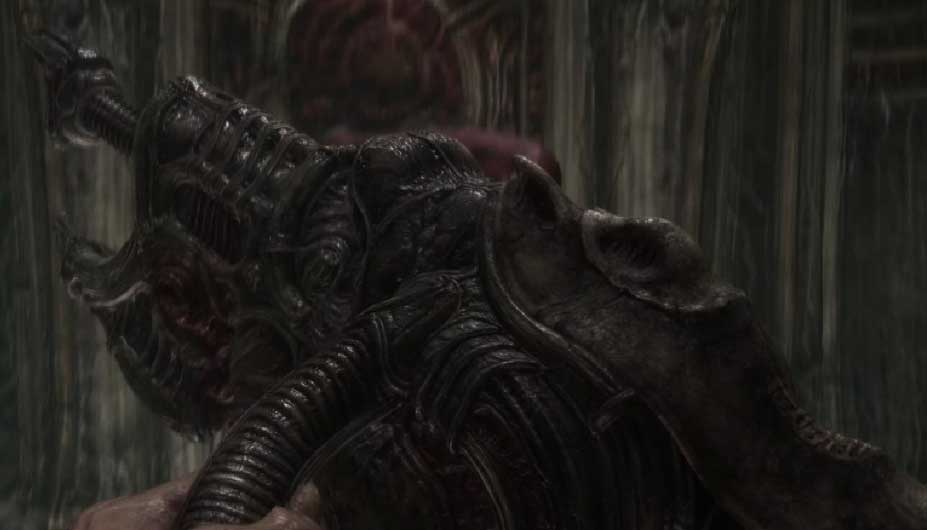 Once you start the act, you can grab this weapon after riding up the elevator from the holster directly in-between the two doorways to the two corridors.

The Revolving Shotgun is another core weapon in the Scorn game that basically fires powerful shotgun shells to kill most low-tier monsters in one hit. While you can only hit two shots to take down the large four-legged creatures which really come in handy.

It has three shells and the barrel spins with every shot. While extra half a dozen shells are held in reserve for your ease. You can get this weapon opposite the pillars with the puzzle mazes in Act IV.

The Shotgun can be picked up in Act III. As you’re exploring and come across the first light node puzzle, you’ll find the weapon in a small side room. It’s one of your core weapons that’s reliable enough in Scorn to kill enemies.

It can hold up to six shots and has room for another dozen in reserve. It uses two to three shots to kill most of the low-tier enemies easily.

The Grenade Launcher is the final and deadliest weapon in Scorn that can be received in Act V. It should be used for the boss fight only and can be used in solving a couple of puzzles. Obviously, if you have enough enemies in one place at the same time then you can hit one grenade to explode the place. 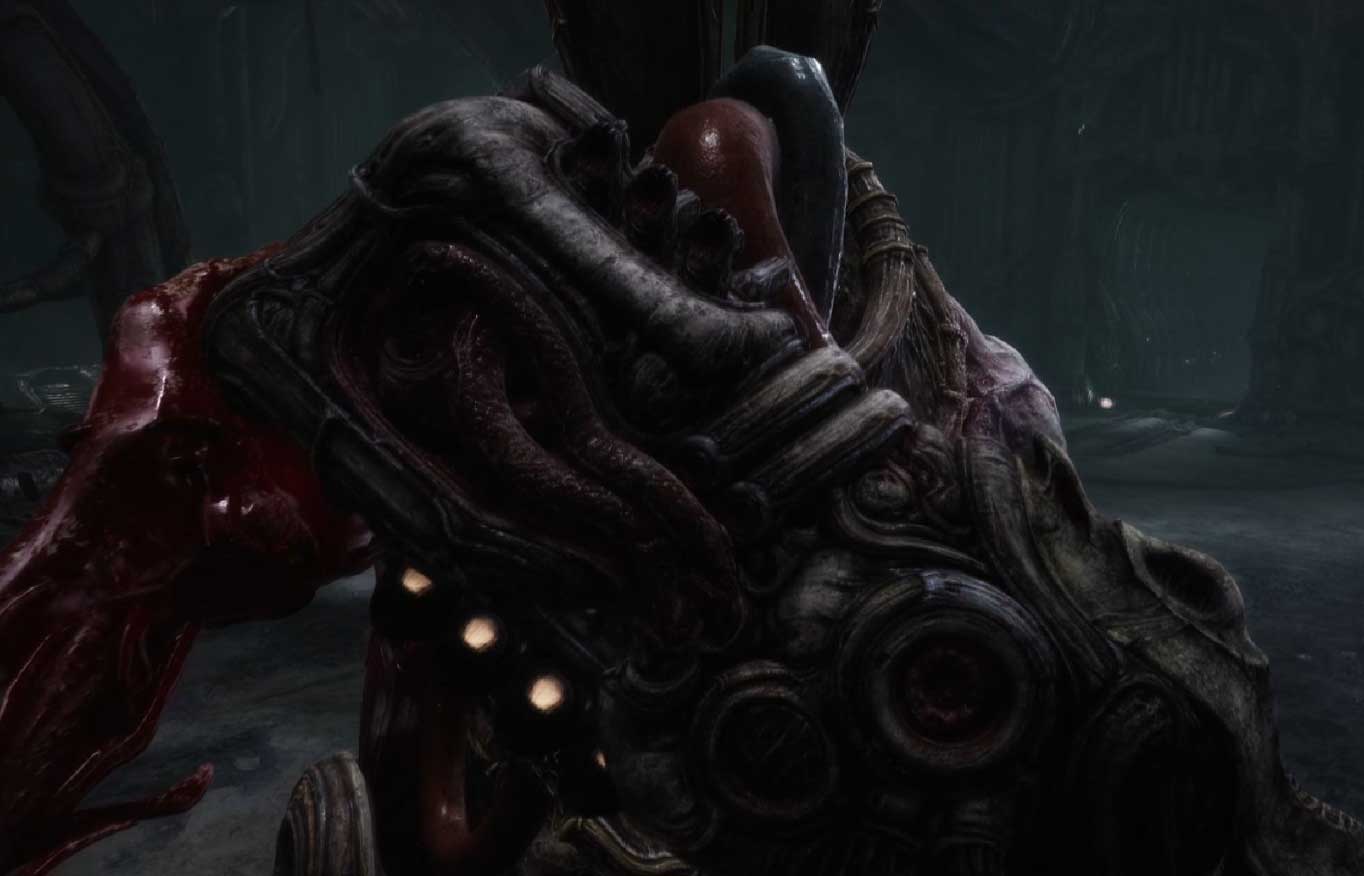 After you defeat the first boss in Scorn, the Grenade Launcher will be unlocked. Keep in mind that the names of these weapons aren’t exactly the same because there is no official name given by the developers yet. So, as per the weapon, we’ve given a name for the players to detect easily.

Scorn is one of the interesting and creepy kinds of video games that can eventually deliver some chills in specific areas with its weapons and scary monsters as you go through the gameplay. It’s recommended to use the specific weapon once you obtain it until the next one because the generic weapon might not be able to kill bigger creatures easily. So, using the right weapon at the right time & place might save your life as a protagonist.