Tiny Tina’s Wonderlands doesn’t disappoint, we start the game by building our character and then choosing our class, gender, and appearance. Since the Character Background is a critical part of this process of building your character, which one should we choose? In this Tiny Tina’s Wonderlands guide, we shall help you pick the best Character Backgrounds for your Class to make sure you enjoy the game to the fullest.

Tiny Tina’s Wonderlands is an Adventure Shooter FPS developed by Gearbox Studios and published by 2K. The game has the same art style as that of the Borderlands series, which is also made by Gearbox Studios. Tiny Tina’s Wonderlands was launched on 23rd June 2022. It is a very recent title launched by the studio and it has seen quite some success with over 3500+ positive reviews on Steam. 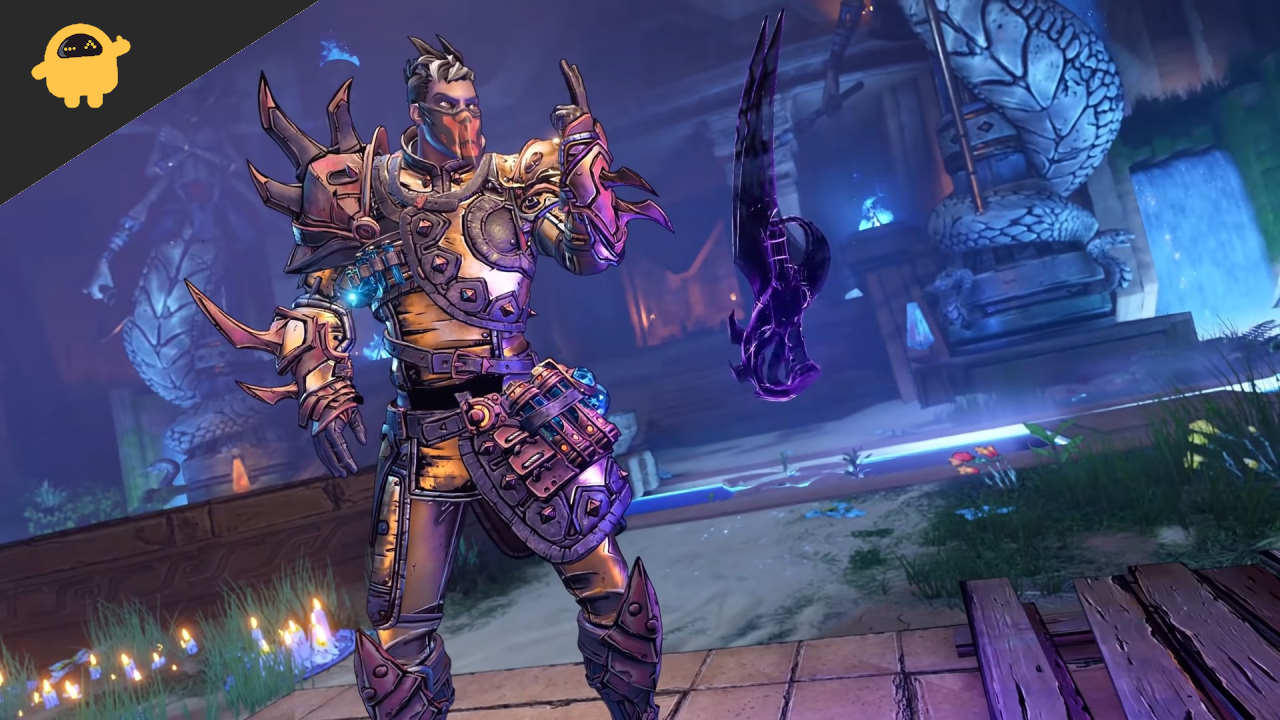 The Backgrounds in Tiny Tina’s Wonderland add a modifier to some of your Hero Stats and give you a brief about your character’s origin. Fortunately, the fluff text does not have any effect on the story in any way, so it is better to just ignore it. Our choice will be based entirely on the kind of build we want to play and the extra boost we require during the early game.

For example – we might want some points in a specific stat anyway as you level up. If that’s the case, perhaps we can add them later and use the background that helps you be stronger while we are a low-level Fate Maker.

Now that you have selected your Class and made Stat changes as suggested previously, we will now dive deep into each Background and explain how they affect the gameplay. We will also be listing out the best and worst Background for each class. 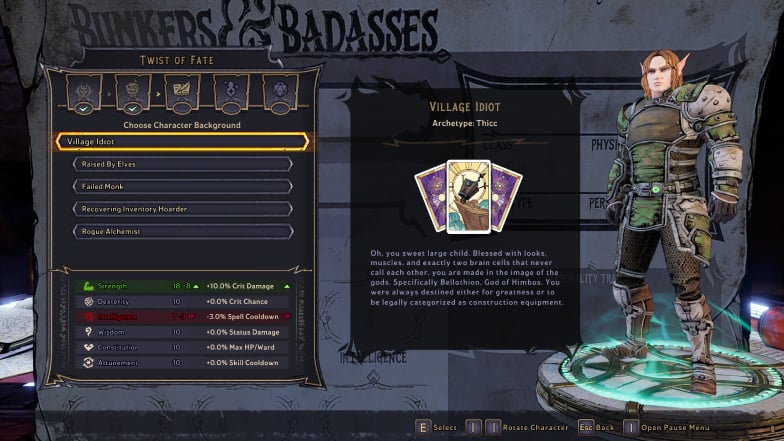 The Game defines this Background as ‘Sweet Large Children’. Classes from these Backgrounds receive a huge boost to their Strength Stat while taking a small hit on the Intelligence Stat which can be made up by upping other stats later in the game. This is an ideal Background choice.

One will almost certainly notice those extra Strength points every time they do critical damage and watch the enemy’s health bar deteriorate. This is an obvious choice for the Brr-Zerkers and Clawbringers Classes. It is also a decent choice for Stabbomancers class. Their ability-enabled critical attack bonuses really make it easy to appreciate the good work those extra Strength points are doing.

Summary – Best Strength boost when compared to other Backgrounds, best suited for the Brr-Zerkers and Clawbringers Classes. Spellshot and Spore Warden Classes should avoid this Background as they focus on intelligence for their stat boosts.

The Raised by Elves Background 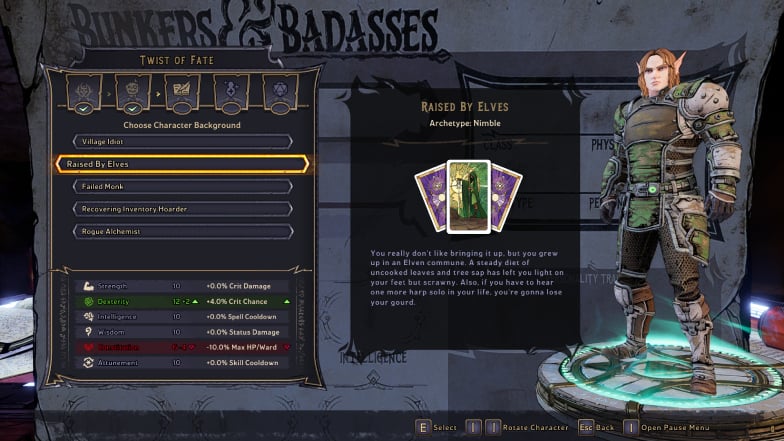 The Game mentions that the Classes that belong to this Background really did not like bringing up the fact that they were brought up by elves. Classes from these backgrounds receive a decent amount of boost in their Critical Chance rate but drastically reduces Health by 10%. This is a good choice for Classes that specialize in casting spells.

Therefore, we recommend this for Classes such as the Spore Warden, Stabbomancer, and Spellshot. While we think that this background option may be overkill for Stabbomancers, it most certainly synergizes with their overall strategy quite well.

Summary – Best Critical Chance boost when compared to other Backgrounds, best suited for the Spore Warden, Stabbomancer, and Spellshot Classes. Brr-Zerker, Clawbringer, and Graveborn Classes should avoid this Background as they focus on Strength for their Stats boost. 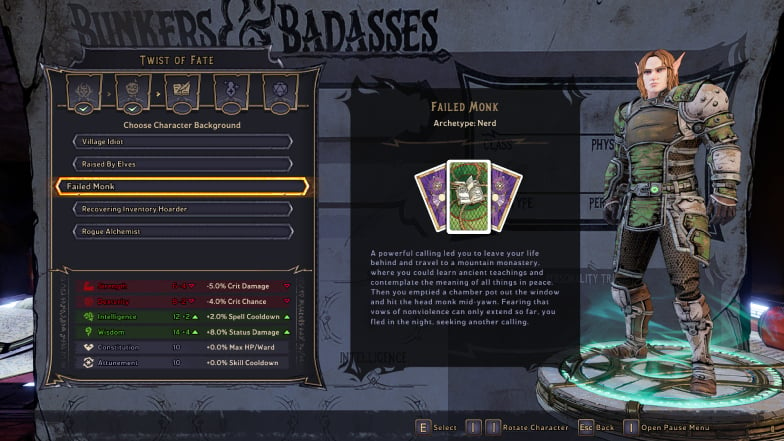 The Game mentions that this class left its regular life due to a powerful calling, the Class tried to preach non-violence but ended up attacking the head monk and running away. Classes from these backgrounds receive a boost in their Intelligence and Wisdom which means higher status damage and lower spell cooldown but gives a disadvantage when it comes to Critical Chance rate and reduces Strength as well.

While we think that this might be a risky choice for any class it might still be the best choice for any spell casting class due to the buffs of this Background as well. We recommend this for classes such as the Graveborn and Spellshot.

Summary – Good boost to Status Damage and Lower spell cooldown, best suited for the Graveborn and Spellshot classes. Brr-Zerker, Clawbringer, and Stabbomancer Classes should avoid this Background at any cost as it impacts their overall strength and health.

The Game Describes this Class as a petty thief who now seeks destruction. Classes from these backgrounds receive a boost in their Spell Cooldown and Skill Cooldown while nerfing their Crit Chance and Health by a decent amount as well.

We feel that this background is meant for classes that rely heavily on casting abilities, we recommend this background for Classes such as Spore Warden, Brr-Zerkers, and Spellshot.

Summary – Good boost to stats such as Spell Cooldown and Skill Cooldown, best suited for classes such as Spore Warden, Brr-Zerkers, and Spellshot. Graveborn and Stabbomancer Classes should avoid this background if possible. 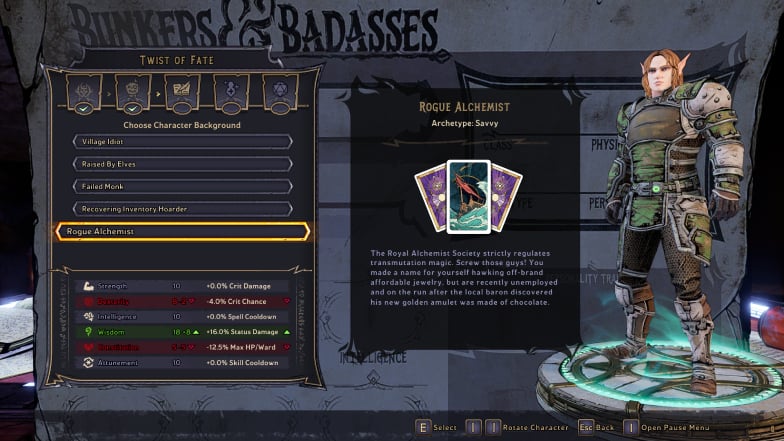 The Game describes this Class as someone who made a name for themselves hawking off-brand affordable jewelry. However, they are on the run because the local baron discovered that his amulet was made out of chocolate.

Classes from these backgrounds receive a boost in their Status Damage but have to sacrifice a lot of Health and Crit Chance. This background is targeted for Classes such as Spore Warden, Graveborn, and Clawbringer as these Classes can benefit from the Status Damage they receive.

Summary – Heavy stat boost for Status Damage but nerfs the Health and Crit Chance significantly, best suited for classes such as Spore Warden, Graveborn, and Clawbringer. Stabbomancer and Brr-Zerker should try avoiding this background if they can.

This brings us to the end of this Tiny Tina’s Wonderlands guide for best Character backgrounds for your class. In the end, any Class is allowed to choose any Background if the player is familiar with their own playstyle.