If you are a lover of card games, then it is hard that you haven’t heard about Solitaire that has swept the life of game lovers since 1990. Remember those desktop computers with huge screens and tower CPUs? You might recall them as the ugly era of computers, but they were the charm of children and youngsters alike. Why? Oh-so-addictive Solitaire game. 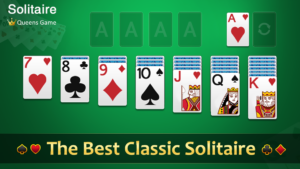 Microsoft started this mania with Windows 3.0 and since then, this evergreen card game has been a part of computers and laptops – also available in apps form and online. So, despite the rise of popularity of video games, the era of this classic card game hasn’t been over yet. Besides being a simple, yet master brain game, it is also because this game comes in different versions – to your surprise, more than a hundred forms. So, you can never get bored of playing this challenging game (believe me, the pleasure of seeing all cards getting fit in the place is unbeatable!).

So, if you want to explore something new in the Solitaire world, you will not be disappointed. From Scorpion, Klondike, Yukon, Dreams Keeper, Spidermania, and Forty Thieves to Goodgame Big Farm, there are unlimited options to keep your love for Solitaire intact with a pinch of spice. They all come with varying levels of difficulty to keep you all hooked up and sitting on the edge with excitement.

Below are a few best Solitaire games that are so additive that you will regret not knowing them before:

Spider Solitaire is one of the most popular card games that came with Windows. This game is for hard rockers who want to shake their brain cells as it is a bit hard to play. It might be frustrating for the beginners but its addiction pushes you to keep on mastering it until you end up saying: Okay, one more game (yes, it gets that addictive once you know the art of playing it!).

It is a 2 deck game with 10 tableau piles. You can build piles regardless of suit, but things start getting difficult when you have to move the piles. You can move groups of cards together only if they are built by suit in the descending order. You have to remove all cards to win the game. It might sound easier to remove cards from the play, but believe me, it needs a lot of strategic planning and skills to score 100%. So, sharpen your strategic planning before playing this game.

FreeCell is a brilliantly designed puzzle-like game that is played by thousands of card game lovers everyday. It is one of the oldest card games that were included in the earlier versions of Windows. Based on another older game named Eight Off, FreeCell never disappoints you. Despite being an old Solitaire game, it is still liked by folks of the new generation. You might find it a bit easier than Spider Solitaire, but don’t mistake it as a piece of cake. It is still a brain game that needs attention.

It is a single deck game, which means you have to deal 52 cards into 8 tableau piles that are all face up. All cards are open and you can take the trophy home if you end up building 4 piles from Aces to Kings in the left hand cells. You might get blocked if you miss attention and focus. So, stay focused, and victory is not that hard to achieve in FreeCell Solitaire.

After playing FreeCell, Klondike, or Spider, you might find Pyramid a totally different world. It has a different structure and format – more like a pairing game. It is a single deck game with cards structured in a pyramid form in seven layers. The key to win is to remove all cards from the play like other Solitaire games, but instead of making piles you have to make pairs of cards with ranks adding to 13. It removes the pair from the play.

It is quite a popular pairing type game and you can stay addicted to it once you know the trick to win it.

Tripeaks is comparatively a new version of Solitaire with a more exciting format and rules. In this game, you don’t make decks or stack piles by numbers, you destroy ‘peaks.’ Peaks are pyramids, layered in three layers. The 3 pyramids, each having six cards, are made with face down cards, making TriPeaks a closed game. The fourth row contains twelve cards all faced up.

You have to move the cards from the Peaks to the waste pile. It is only possible if the card on the waste pile is one number above or below than any of the opened cards. This game needs skills as well as luck. So, best of luck if you are going to play this game.

In case you end up having no more cards to move, flip up the top card of the deck and place it on the waste pile to keep the game going. It is simple, fun, and the best to introduce anyone to the Solitaire mania.So, now you know what to play to quench your thirst for Solitaire and keep the fun and excitement flowing in your life. These are just a few versions of Solitaire. There are many more to keep your craze for card games going. You just need to keep the love for Solitaire alive and these games will take it to the peak. So, what are you waiting for? Let’s dive in!