Google finally revealed the next version of Android OS called Android 9.0 Pie. The update is been rolling out to Pixel phones now. The currently supported devices are Google Pixel, Pixel XL, Pixel 2 and Pixel 2 XL. Google announced the Android Pie beta preview earlier this year and includes lots of new features. Google also say’svivo X20 Plus that the devices that were a part of the Android P developer preview program with brands such as Sony, Xiaomi, Oppo, OnePlus, Essential, and more along with some Android One phones, will get the Android 9.0 Pie in the fall.

We already shared the guide on how to enroll for Android Pie Beta Program on Pixel, Sony, Xiaomi, OnePlus, Nokia and Essential. Here is the list of supported Android 9.0 Pie beta currently: Sony Xperia XZ2, Xiaomi Mi Mix 2S, Nokia 7 Plus, Oppo R15 Pro, Vivo X21, OnePlus 6, and Essential PH‑1.  If you are pixel users, then you can download the Android Pie factory image and flash it on your phone.

In March Google finally raised the curtain and unveiled the Android P Developer Preview (DP 1). Although expected to drop somewhere around mid or later in March 2018, it showed up a bit earlier. The OS bought a lot of features and changes. Google never lets its user down when it comes to features. Let it be the Android OS as a whole or stand-alone Apps features are always user-friendly. In this post we will discuss the important features of upcoming Android P. Along with that, we will also see what are the devices that will receive the next sweet Android OS in the form of Android P.

Android 9.0 Pie is the 9th iteration of the Android operating system. It is the successor to Android 8.0 Oreo. There were lots of confusion regarding the name of the 9th biggest Android OS from Google. Some expected the version to be called Android Pistacchio, Popsicle, Pineapple pie and some have already dubbed it has Pie. Well, Google finally opened the curtain and made the OS public with the name Android Pie. Android 9.0 is being carefully carved by giving touch-up to existing attributes of Android Oreo and simultaneously packing newer features.

Most of the features in Android 9.0 Pie have been well-received in the beta. With the new stable version of Android Pie brings the more advanced battery management system with AI, App actions, improved text selection features which is now come with a magnifier and smart text selection and new gestural navigation system. 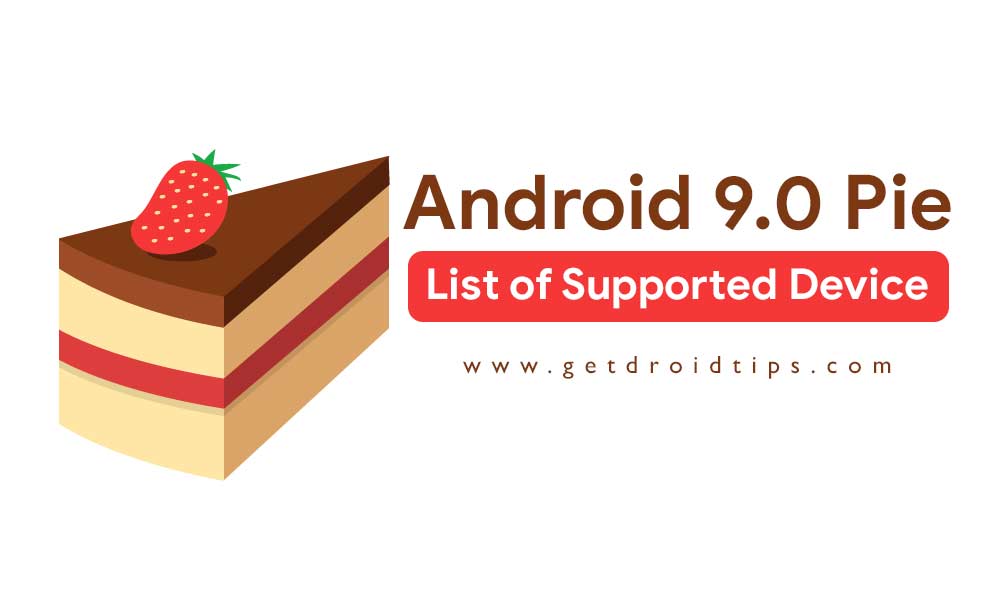 Android 9 Pie features are quite more than what meets the eye. Here are some of the makeover to existing features and new addition. It is actually a massive list with cool changes.

To be honest, this list of supported devices for Android Pie is just based on mixed criteria. At the same time, nothing is confirmed as of now from the official sources regarding device support.  So, we will just assume these devices will get the Android 9.0 Pie update on the basis of how relevant and latest the device is. Usually, a device receives a major Android OS upgrade within two years of its entry into the market. So, we have listed the devices that will receive Android-P on the basis of that. There are a lot of premium flagship devices that are pretty new and running Oreo Android OS. So, there are chances these devices will get the Android 9.0 P too. So, here is the list of devices.

Here is a list of Android Devices which would be supported by the Android 9 Pie Open Source Project  [Custom ROM development].

AOSP Pie for Other branded devices:

Though this an unofficial list but it would be great to see a lot of devices support and receive Android Pie update in the coming days.

So, that’s pretty much about the Android Pie, its features, supported devices list and release date itinerary.

Follow GetDroidTips to get all the latest updates on Android Pie.