Seasons of Arrivals expansion in Destiny 2 brings with a lot of cool new exotic weapons for players to select from. Exotic weapons are basically golden or yellow tier weapons that have extraordinary stats. The only catch that comes with these awesome unique weapons is that players can only equip themselves with one exotic weapon or exotic armor. This means that at the same time, there will only be one yellow item on either side of the load-out setup screen.

In Seasons of Arrival, players won’t have to collect many Sunspots as all the weapons will have the same stats as another. Bungie has also brought improvements in the armor mechanics as they will have increased agility and higher damage recover similar to the original Destiny’s sub-classes. 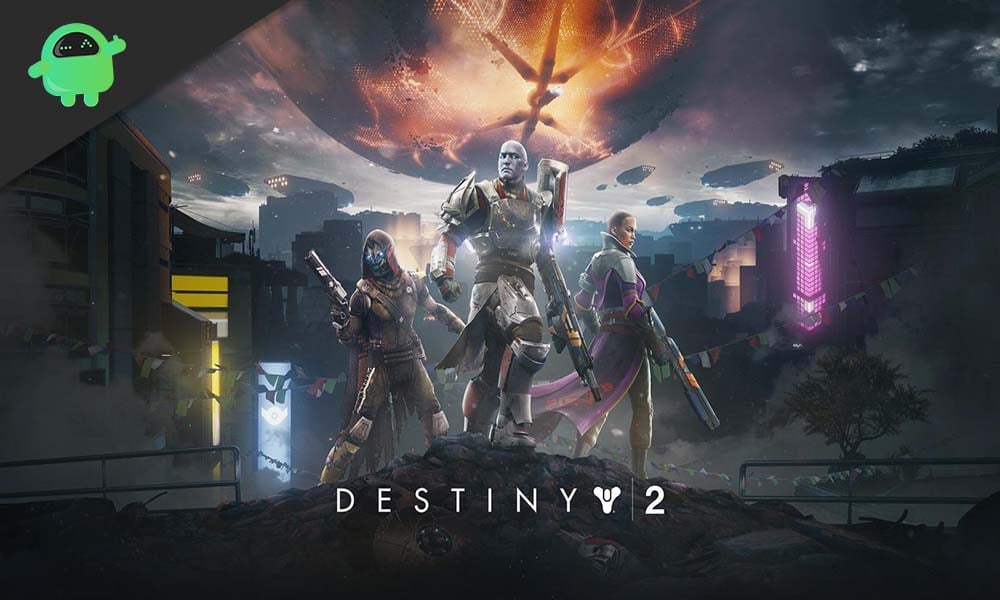 About Exotic Weapons in Destiny 2

There are many different ways to get an Exotic in Destiny 2:

Naturally, the best and most potent exotic weapons will take some amount of time. It may require the player to unlock certain specific quests that may involve several steps and, in certain cases, even an elaborate ARG-themed puzzle. Players can even upgrade certain exotic weapons in Destiny 2 using the Masterwork Catalyst. However, finding them in Destiny 2 requires players to complete certain quests and a lot of luck.

Some players may actually find it difficult to figure out which weapons are worth tracking down and adding to their weapons inventory. Especially if the ones locked behind long quests aren’t all that powerful. So now, we will go through all the best exotic weapons and how to get them in Destiny 2 Season of Arrivals.

Below listed are all the best exotic weapons from SoA in Destiny 2: 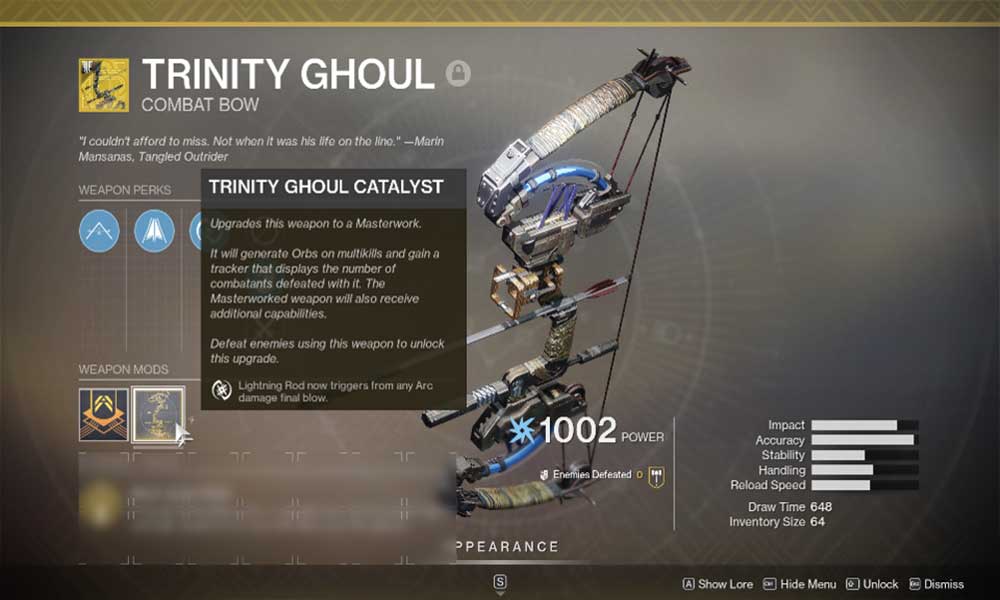 The Trinity Ghoul is one of the easiest exotic bows that players can get their hands through any exotic engram in Destiny 2. Its special ability gets activated once players find the catalyst for it. The catalyst will trigger chains of Arc damage against enemy opponents. Each timing arc energy is used. With the catalyst, players will also notice greater charging speed and increase bow draw speed. Once the catalyst is ready to go, the Trinity Ghoul in Destiny 2 becomes one of the best bow-type weapons. 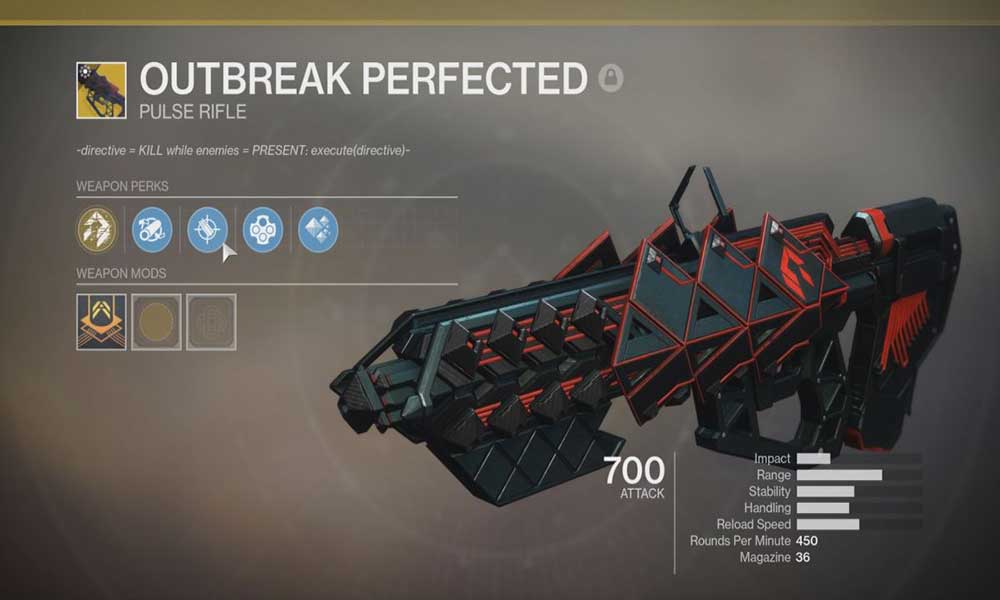 The Outbreak Perfected is one of the best exotic pulse rifles in Destiny 2. Players can get their hands on this after successfully completing the Outbreak Perfected Exotic quest. Using this weapon, players can acquire precision kills at a high rate. This will also produce SIVA nanite swarms that are capable of hunting down and dealing with damage to enemy opponents. It can also interrupt unstoppable enemies through the seasonal armor mods. 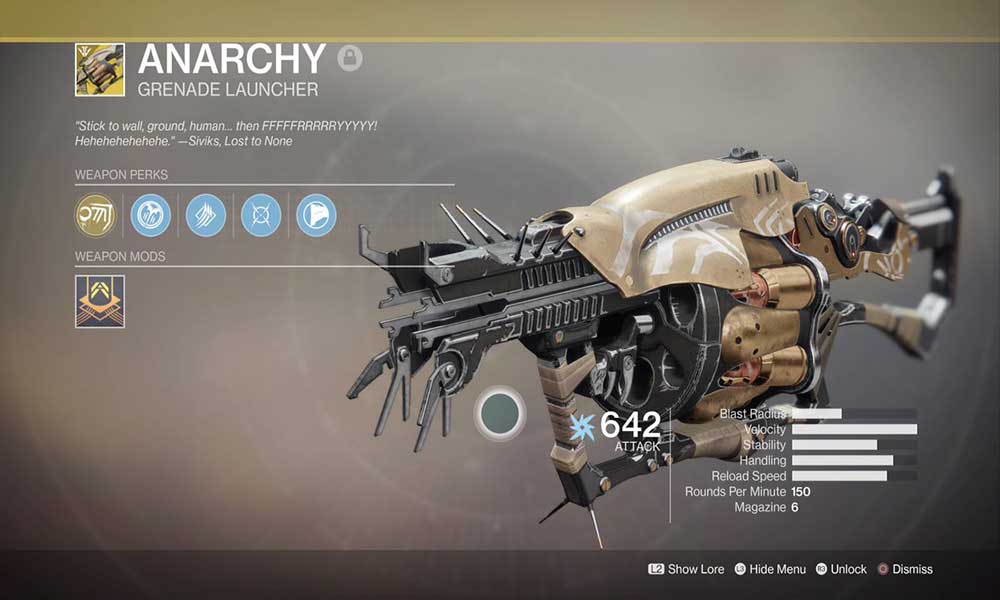 The Anarchy is an exotic grenade launcher in Destiny 2. Players can get their hands on the Anarchy after successfully completing the Scourge of the Past raid. Using this weapon, players can generate chains of arc energy that can easily melt anything within its range.

The Ace of Spade 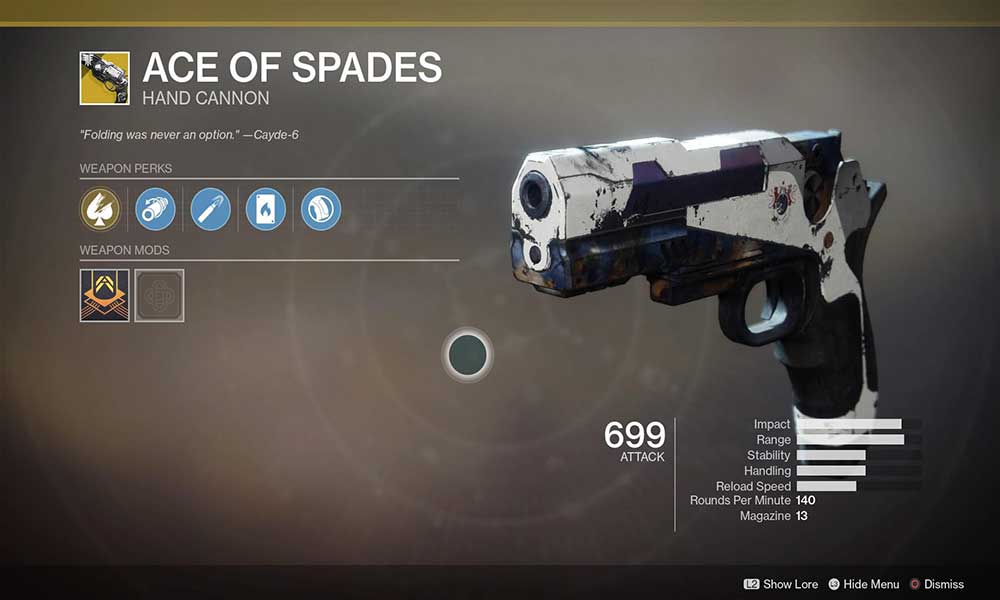 The Ace of Spade is one of the most famous exotic hand cannons in Destiny 2. Players can get their hands on this exotic after successfully completing the Cayde’s Will quest. What makes the Ace of Spade different from all the other hand cannons is its unique ability to deal with critical damage using the Memento Mori perk. Players will get an entire magazine filled with more powerful rounds once they reload after making a kill. 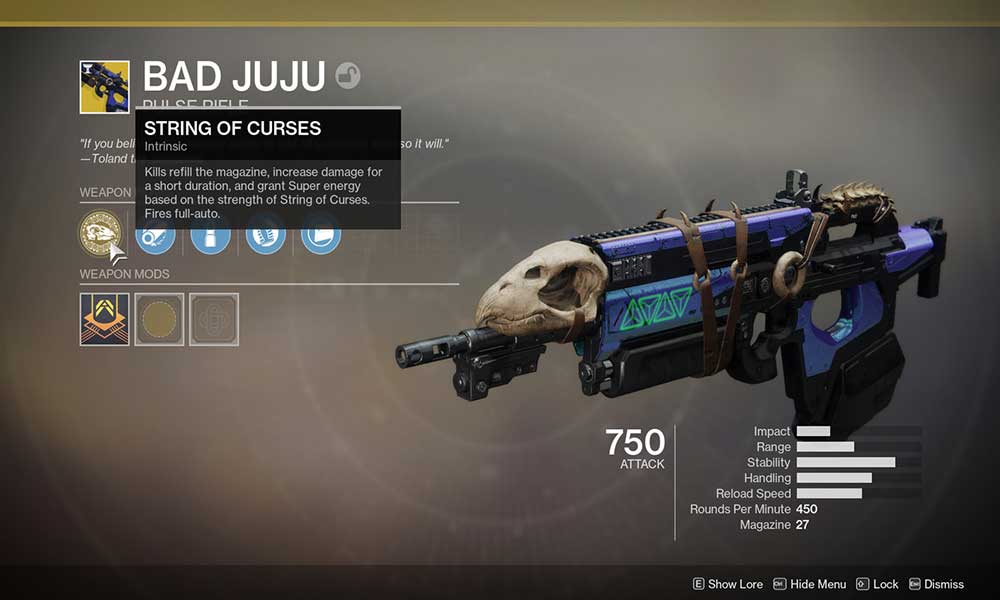 The Bad Juju is another exotic pulse rifle in Destiny 2. Even though it may not be easy to master, it does bring a lot of special abilities that make it worth the while. Players will receive super energy after making kills, weapon damage can increase and magazine while killing enemies. In order to get it, players must complete the Calus’ Leviathan exotic quest. It can also interrupt unstoppable enemies through the seasonal armor mods. 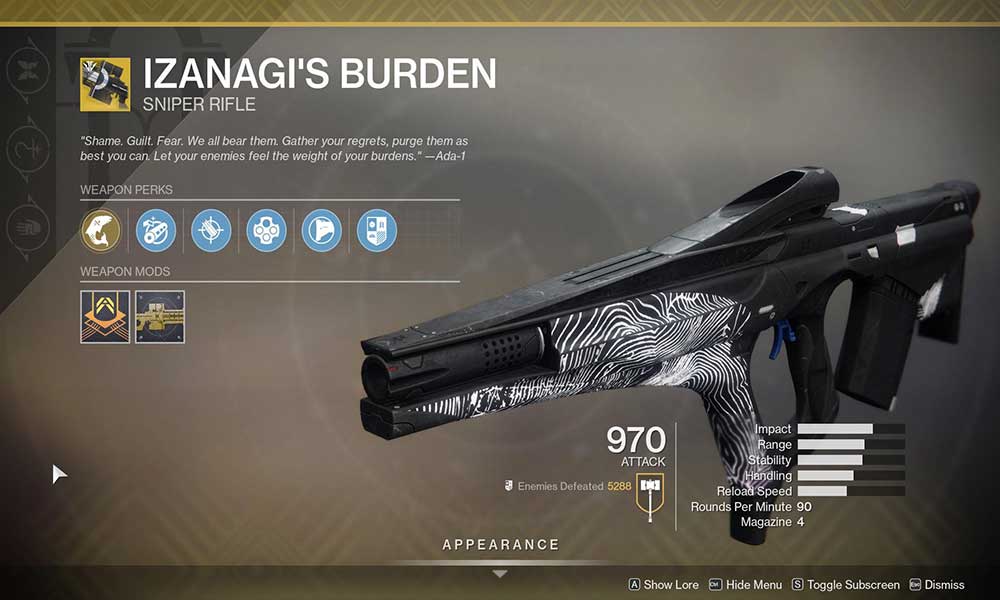 Whisper of the Worm 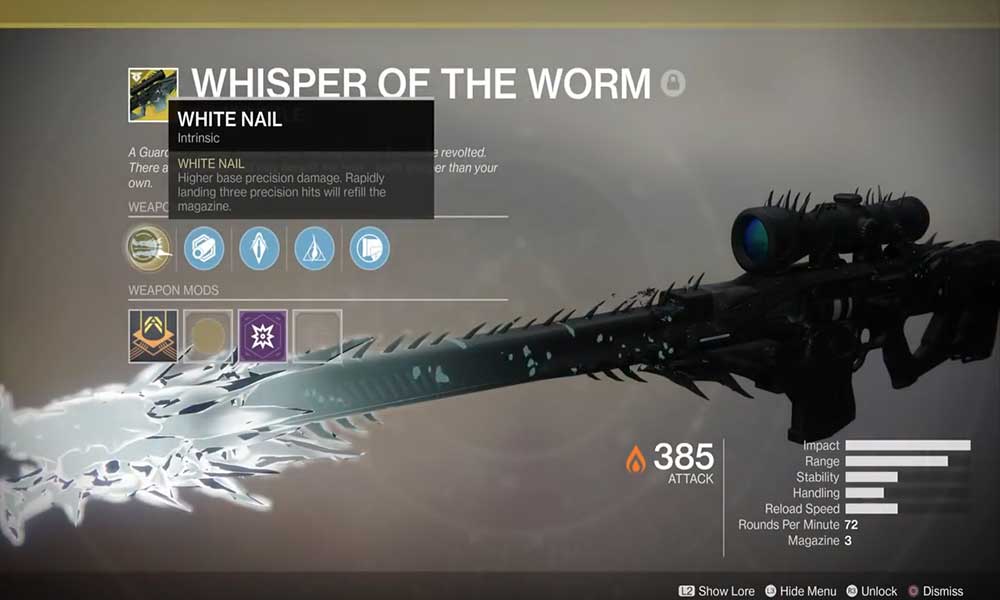 Whisper of the Worm is another good choice for an exotic sniper rifle in Destiny 2. Players can get these weapons after completing a special quest on planet Io. It is recommended to go with a full fireteam as its not all that easy. 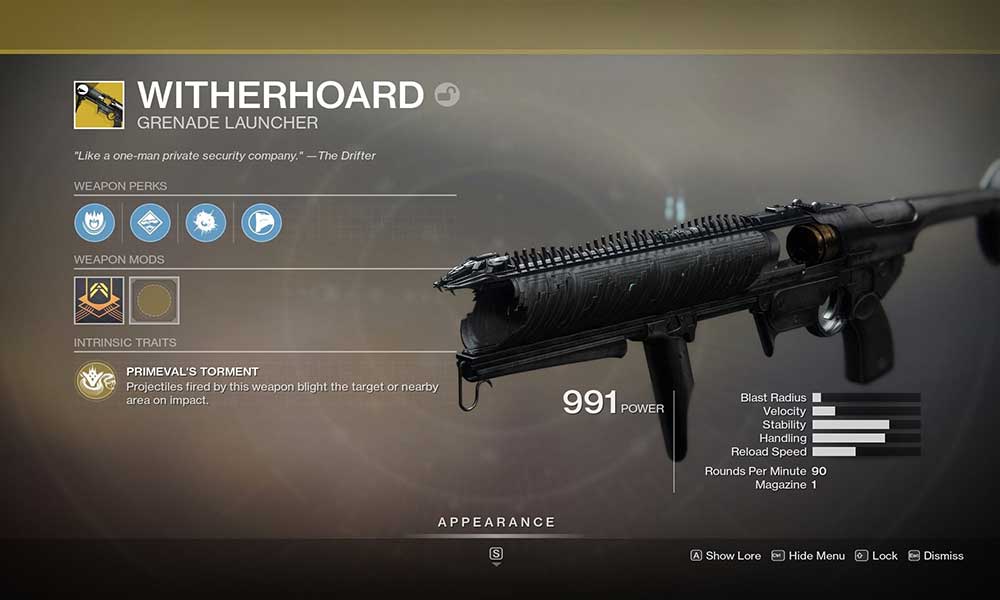 The Witherboard is another great exotic grenade launcher in Destiny 2 that can be acquired through the Battle Pass. Using this weapon, players can inflict critical damage, damage-over-time, along with the area of effect damage against enemy targets. It is a very powerful grenade launcher and has been balanced since the beginning of the season. 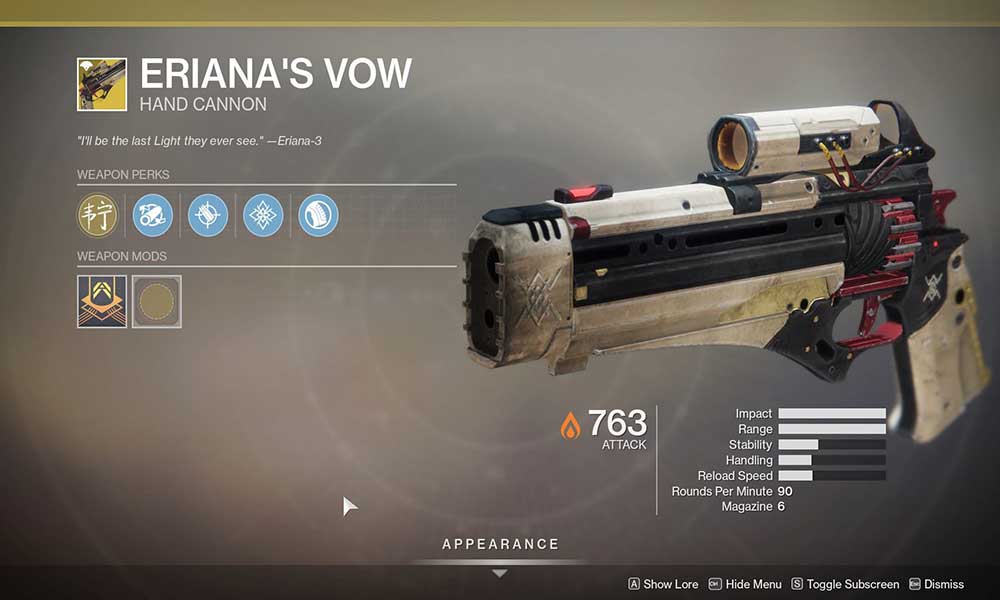 The Eriana’s Vow is an interesting exotic weapon, as it is a hand cannon that functions as a fusion rifle in Destiny 2. It can only be acquired using the exotic cypher from the Battle Pass from Rahoul at the Tower. 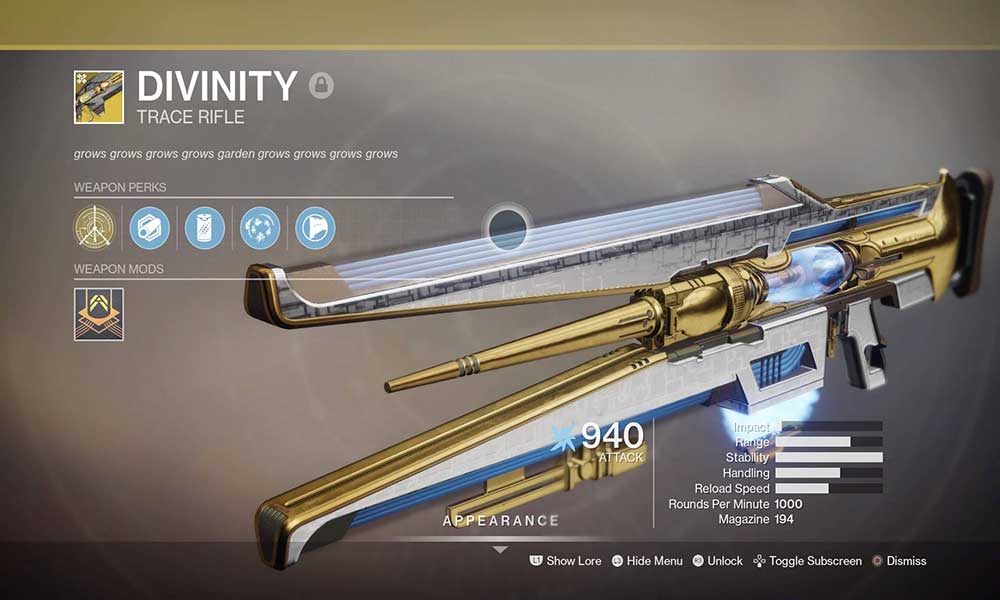 The Divinity is an exotic trade rifle in Destiny 2. Players can get their hands on the Divinity after successfully completing the Garden of Salvation raid. What makes this exotic trade rifle unique is that it can make all damage sources hit harder against an enemy along with its own damage. It is the most sought-after endgame weapon.

This concludes our article on all the best exotic weapons in Destiny 2 Season of Arrivals. Now, If you liked this guide, remember to check out our other Windows Guides, Gaming Guides, Social Media Guides, iPhone Guides, and Android Guides to read more. If there are any queries or suggestions, comment down with your name along with the email ID, and we will reply shortly. Also, subscribe to our YouTube Channel to watch awesome videos on gaming and smartphone tips and tricks. Happy Gaming.