It’s a new month both in the real world and in the PvP meta, so it’s time to review which heroes from the Idle Heroes franchise are most excellent for your team this month. If you’re familiar with Idle Heroes, you most likely know the 8 tiers heroes are grouped into: the SS for the most powerful heroes, the S, A, B, C, and D tiers, and finally, the F tier for the absolute worst heroes in the game. 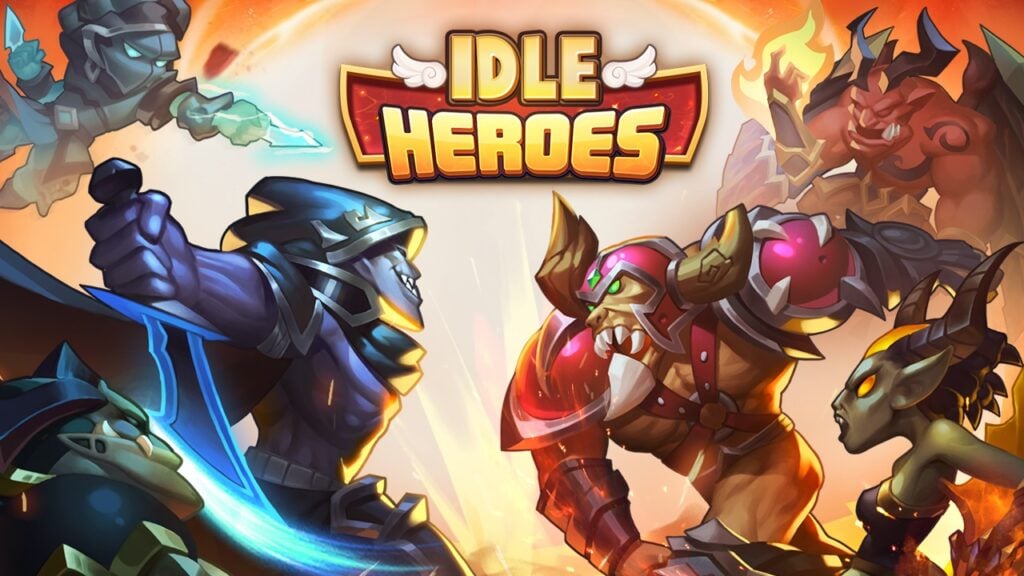 A happy new month to you all, and welcome to our list of the best Idle Heroes tiers in PvP for August 2020.

This is the God Tier of Idle Heroes and in our pick for the month of August 2020, we have included Carrie, Sherlock, and Garuda as worthy occupants of this level. And for good reason. Between them, these heroes have the ability to take down any team made up of any combination of the lower-tier heroes.

Take Carrie for example. She has the ability to steal energy, and prevent other heroes from using their active skills. She cripples heroes, even up to the point of making them completely useless. She has super fast speed abilities and is definitely one of the main heroes who define the meta in PvP. 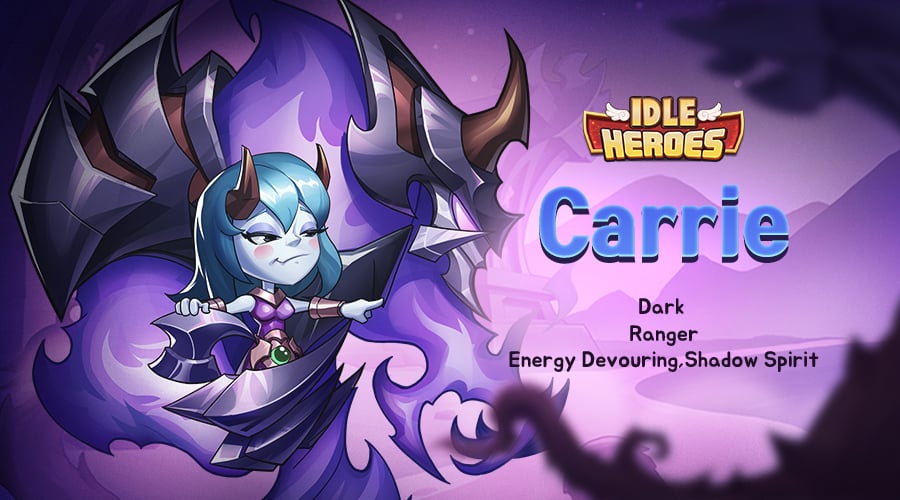 Then there is Sherlock. If you’ve ever used this hero, you’ll know just how potent he is in attack. He turns his opponent into a dove and prevents them from getting any of their passive skills. Sherlock is also very adept at absorbing all of your attacks, then taking all of the damage off himself and on to one of your heroes. The best part is, he heals back to full health after doing this, leaving him with a greater capacity to do even more damage. Both Carrie and Sherlock can cripple opponents when they get their active skills off.

Garuda might be the weakest hero in this tier for this month but is still in the SS Tier for a reason. This hero has feathers and the ability to heal back to full health when enemies die. She also has the capacity to do massive damage whenever she’s on her active skill.

Belrain, Drake, Rogan, and Amen-Ra are our top picks for the S Tier for August. People who don’t have heroes from the legendary SS Tier usually opt for these heroes. Most of the heroes in this tier are great at playing complementary roles in almost any Idle Heroes team, and that really is where their greatest utilities lie. That ability to work harmoniously in any team is very critical to success in this game.

Belrain can manipulate speed when she’s on her active skill, and also has the ability to heal your team. Rogan has the same ability to manipulate skill but does it when he starts off a fight. He can also buff assassins, and being an assassin himself, can also buff himself –  a very crucial skill can double or even quadruple his effectiveness in your team. 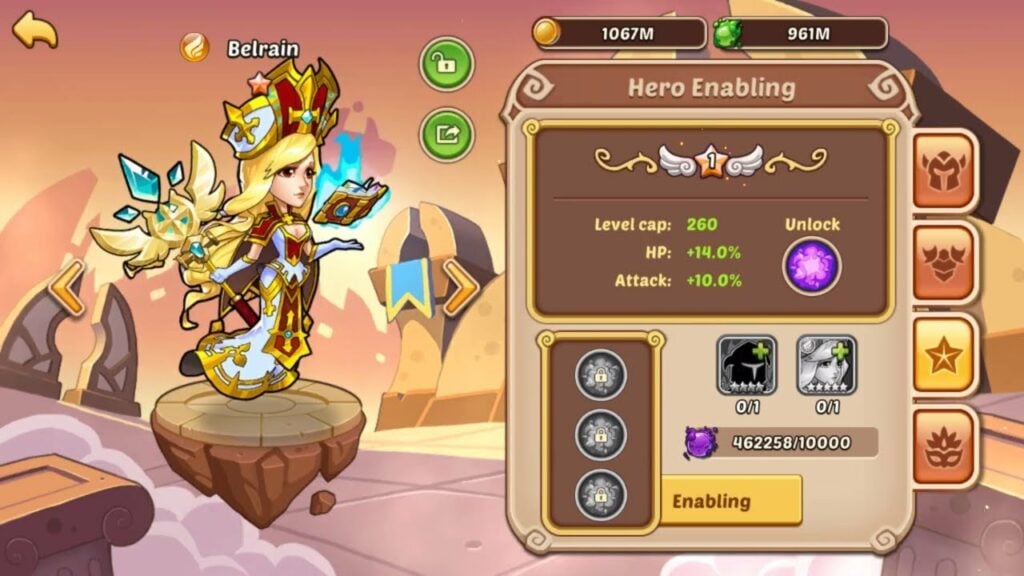 Drake is also an assassin and is great at complimenting Rogan. He targets the lowest HP heroes and debuffs them. He also possesses sublime dodging skills which makes him very difficult to kill. Another card this hero has up his sleeve is his ability to deal black hole marks which he uses to cripple opponents at the end of a fight. Just like all the other heroes in this tier, he has decent finishing abilities, but his real strength lies in his ability to play as a support to complement any team.

The last character we will talk about in this tier is Amen-Ra. She is probably the weakest member in this tier for this month, but she’s also a very potent hero who can cripple Garudas with the healing curse. She can also punish people for using Belrain because her healing curse turns any healing into damage against that particular hero. And since one of Belrain’s powers is her ability to heal your team, you’re better not using her against Amen-Ra because then you would only be healing your team at the expense of Belrain.

Aida has to be our top pick for this tier. She is – arguably – S tier quality with her ability to punish heroes for using their active skills. However, she is mostly at a disadvantage when faced with a Carrie because she is relatively slower, and Carries rely on speed for their efficiency. Aida only gets good speed when she is hit with a Belrain buff or a Rogan speed buff. However, this only works provided you’re not facing an opponent who has any of these heroes among their ranks. 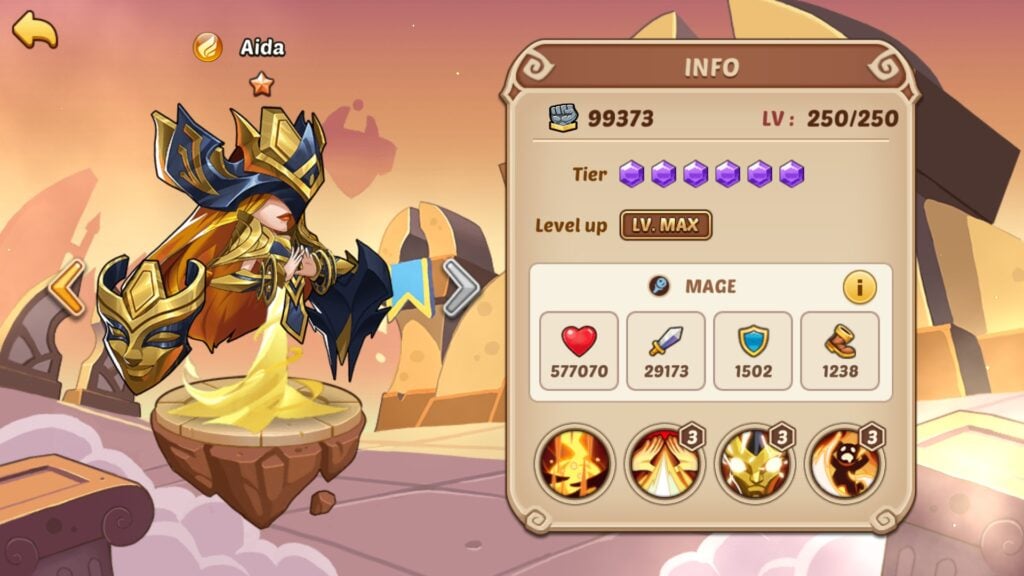 Mihm and Tara are also worthy occupants of this tier, although Tara arguably can also occupy a place in the S Tier. Between Mihm’s disruptive ability with his final passive and Tara’s seal which prevents opponents from using their passive skills, these heroes are capable of doing some very serious damage.

Another hero worth mentioning in this tier is Gustin. He’s strong and fun to play with, removes buffs from enemies, and is also a great alternative for those who don’t have the SS and S tier heroes.

Aspen, Unimax-3000, Ithiqua, and Nakia are standout heroes in this tier. Whenever an Ithiqua is paired with a Rogan, the result can be really devastating for opposing teams. If you’re able to obtain two Ithiquas, then even better, because Ithiquas complement each other splendidly with the ghost marks they give. She could have ranked higher in tiers if only she wasn’t so selective with the teams she works optimally in.

Aspen’s greatest asset is ‘horrify’ which can be destructive when paired with a Carrie. What this does is that it weakens your opponent’s heroes and prevents them from being able to use any of their basic attacks. 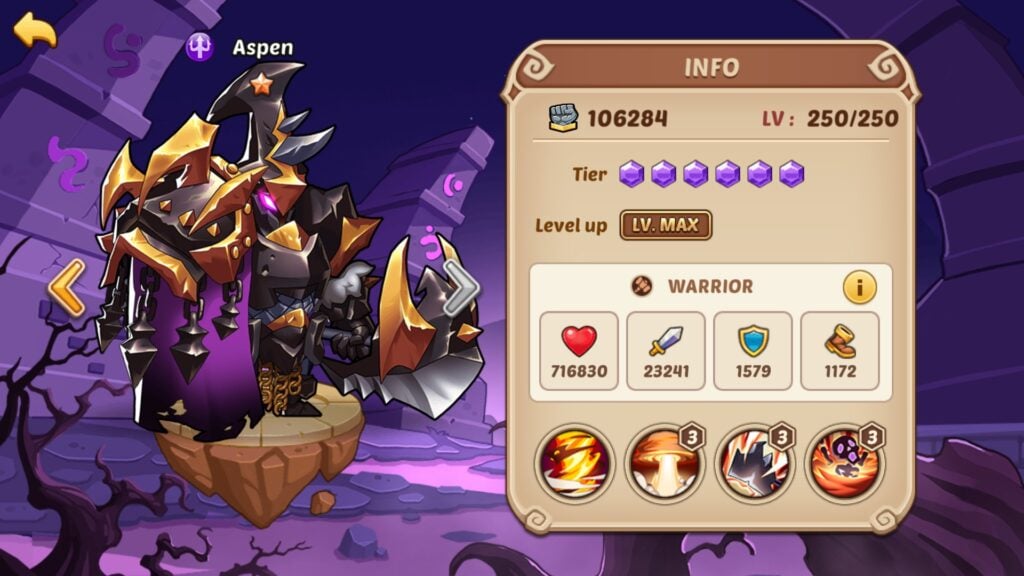 Unimax-3000 used to be a very highly-rated hero, but since a lot of players have shifted focus to single power damage, Unimax-3000 has lost a lot of relevance. He has the taunt ability, which is great but doesn’t really help especially against heroes like Carrie and most of the other heroes in the tiers above. Nakia has decent speed and the debuff ability, but relies too much on her basic attack and thus can’t be justifiably ranked any higher the B tier.

Asmodel, Ormus, Horus, Penny, and Kroos are decent heroes and really fit into this tier perfectly. The problem with the heroes in this tier is that they are relatively niche, so their strengths don’t come to the fore very often. If you’re going to have success in PvP, you’re better off going for heroes whose strengths are very relevant very often, as opposed to these C tier heroes whose strengths are only played to once in a while. 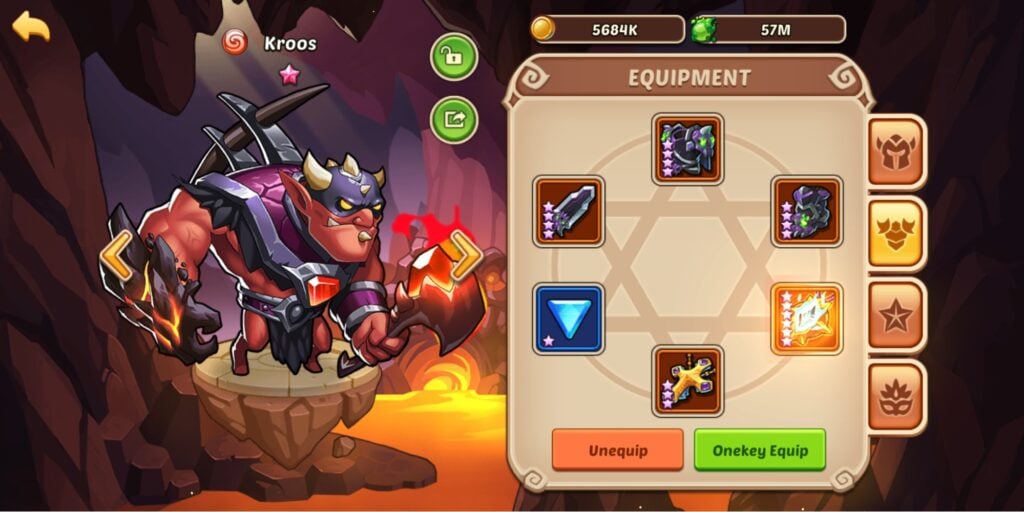 For example, Horus requires getting hit to really pop, and it’s difficult to take advantage of that. A Kroos comes with a neat passive skill that stuns your opponent, but purify removes that, so this skill can maybe help you win a round of battle but definitely not the war in the long run. Ormus has healing powers, but healing isn’t something you want to rely on in the PvP meta right now, plus there are other heroes who already do healing even better.

In the D tier, we have mostly sub-optimal heroes like Oberon who’s reliant on other Oberons for support in order to be effective, and Starlight who has an increased Viability in Guild Wars but isn’t such a great addition to your PvP team in the current meta. Other heroes in this tier are average characters like Xia, Skerei, King Barton, Flamestrike, and Vesa. 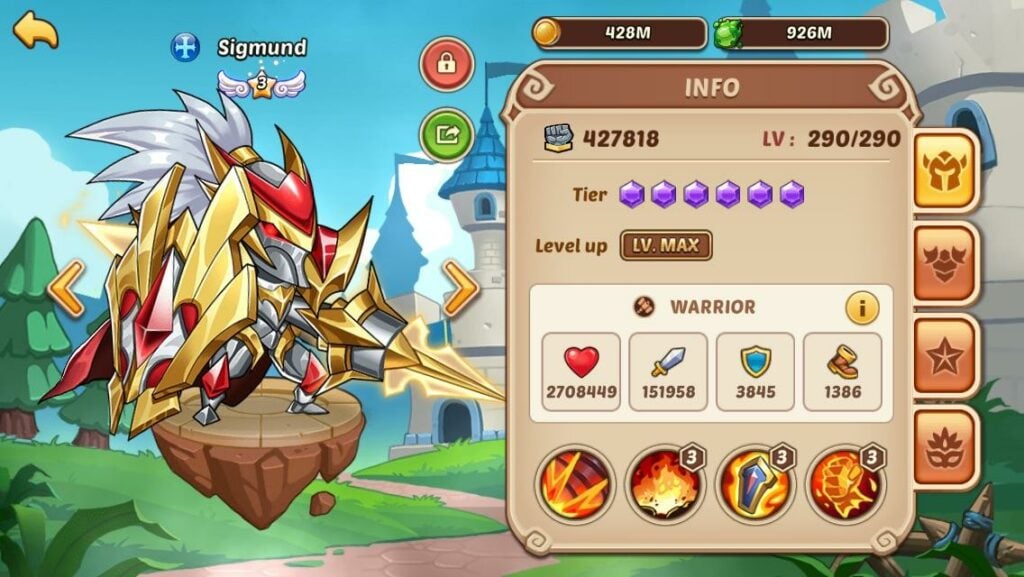 Not a very satisfactory bunch of heroes in this tier. They’re mostly underperformers, and you’ll probably be better off avoiding them altogether. Our pick of heroes for this tier in August 2020 includes Das Moge, Corpsedemon, Sigmund, Queen, Barea, and Kamath. 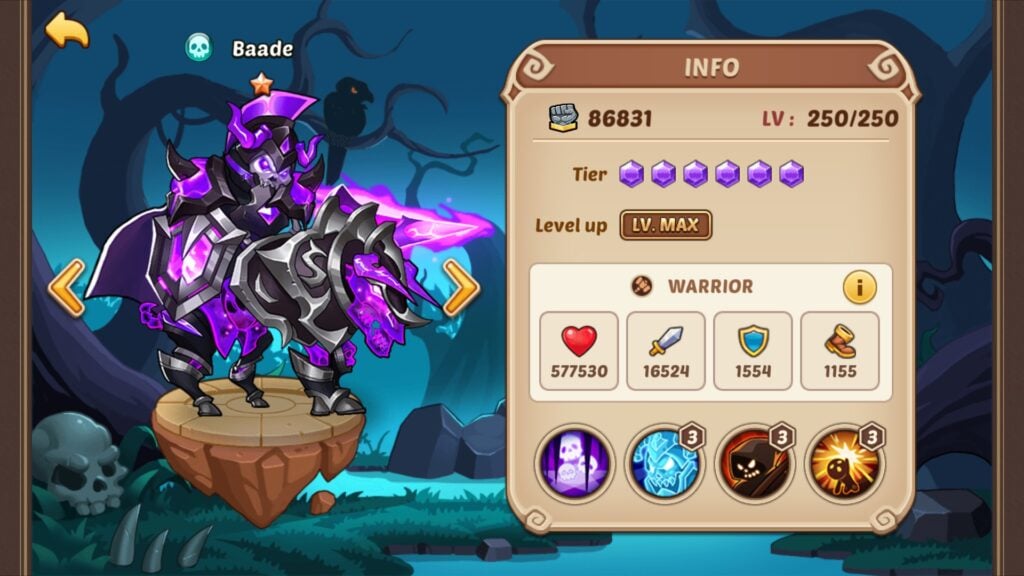 This is the absolute bottom tier category of heroes. The heroes in this tier like Heart Watcher might be insane in PvE, but don’t expect a similar result from them in PvP. Lord Baade and Blood Blade are frankly, crappy heroes, and can’t possibly rank higher in our list for this month.

Piece of honest advice: try not to go below the B-Tier when collecting heroes. A few heroes fro the C tier like Kroos and Horus might be great at playing complementary roles alongside heroes from the tiers above, but you’re really just better off going for higher-ranked heroes in the current PvP meta.

So there you have it: the best heroes tier list in PvP mode for August 2020 in the Idle Heroes game. Let us know which one(s) of these heroes you will be using going forward in the year (or at least this summer), and if there’s any hero you think we’ve omitted from this list, all in the comments section below.