Samsung launched the Galaxy C7 2017 in September 2017. The device brings much more to the table such as AMOLED Display, 4GB RAM, Dual Camera, and runs on Android 7.1.1 Nougat. As we know most Android phones will have their own problem which can be resolved quickly. Here we have listed some of the common problems that most Galaxy users may face. This article is the Most common Samsung Galaxy C7 2017 Problems and their solutions.

Talking about the specs, Samsung Galaxy C7 2017 features a 5.5 Super AMOLED display with a screen resolution of 1080P. It comes with Octa-core processor clubbed with 4GB of RAM. The smartphone has 32GB of internal storage and can be expanded via MicroSD card. The camera on the Galaxy C7 2017 sports dual 13 MP Camera on the rear and 16MP on the front for all selfie lover. It runs on Android 7.1.1 Nougat out of the box. 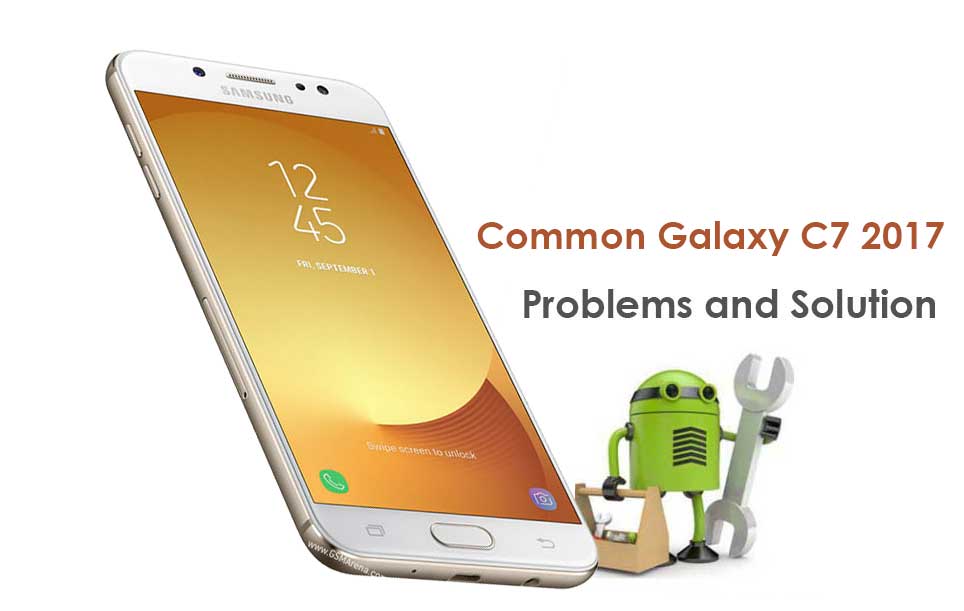 Most Common Galaxy C7 2017 Problems and their fixes

Have you recently purchased Samsung Galaxy C7 2017? Then you need to be enjoying this smart and amazing looking smartphone in which Samsung wrapped several cool features. If you have already bought these smartphones, then you may have facing certain common issues with smartphones.

Some customers have claimed of facing few problems in their brand new Samsung Galaxy C7 2017.

So, we are here with a list of some common Samsung Galaxy C7 2017 problems and their fixes.

As we have discussed so many times, Wi-fi is a very common problem with most of this Smartphone while it has started annoying the Galaxy C7 2017 users too. Here are the fixes for this issue.

Simply restart the modem and router. If they are restarted, then a new connection will probably be starting, and it ends up fixing the Wi-Fi issue in your Galaxy C7 2017. This will probably solve the problem.

Not solved yet? Forget your Wi-fi connection and then reconnect it again. You can do so by going to Settings then Wi-Fi and simply tap on the SSID name that is to be deleted. And next tap on forget and the network will be taken off. Reconnect to that network using the password that you have been set already.

You can try Turning off the Hotspot 2.0 feature as many have said this measure has been shown helpful in resolving the Wi-Fi issue in Galaxy C7 2017.

Make usage of Wi-Fi analyzer to examine the crowded station so that you can shift into a better channel.

Visit Settings > Advanced and check the MAC address of the device. Now, make sure that speech is allowed to the router MAC address filter.

Camera issue in the Samsung Galaxy C7 2017 is just another problem that’s been confronted by many customers till date. On the other hand, the issues are of different kinds. While some claimed that the camera program becomes closed suddenly with showing a warning camera failure message other have said that the camera simply gets closed and don’t allow them to capture any pictures. However, below are some solutions for that issue.

First, restart the device because you get this kind of message and then try again to determine if the camera works or not correctly. To test for update head towards Settings > About phone and also there you will get to understand if any update is available or not. If possible then go for it.

Another solution is to turn off the Smart stay feature. This kind of issues was confronted by the users of Samsung in the previous year also. This actually keeps the screen awake when you consider it and to do this it makes use of the sensor. However, in the course of doing this, this attribute interfere with the camera app and give rise to such kind of issue. So, head towards Settings then Advanced features and then Smart Stay and flip it off.

Bluetooth 5.0 is being supplied in the latest version of Galaxy that offers quicker pairing time along with fantastic range, but still it is not free from flaws and complaints are a lot like Bluetooth not working or quite poor performance etc.. However, here are the fixes for this problem.

The scanner in Samsung Galaxy C7 2017 is located on the rear side just next to the camera, and also the difficulty lies here. The majority of the users have complained about the imperfect location of the scanner. However, we can hardly do anything to modify the location rather you will need to get used to, and you can also follow some cool trick to make things easy for use.

One of the best solutions is to set up the scanner once again to get a more accurate reading. This time change the angle, so the tip of your fingers, direction etc. which will produce the handling of this device lot easier.

#Slow Charging problem Or Overheating While Charging the smartphone:

One of the greatest issues faced in Samsung Galaxy C7 2017 about which many users have complained thus far. But, if you are the lucky one and did not confront any such issue, this may irritate you in the future. According to some users, the phone gets overheated while charging when some others have said that it takes long enough to charge. Here are the fixes for this.

Fixes for overheating while charging

#A Few Programs Are Not Full-Screen Problem:

Galaxy C7 2017 is having a big size display of 5.8 and 6.2 inch that makes every video highly enjoyable. But, it has given rise to some issues also. A few of the consumers have complained that there are few programs which are not full screen. That is those programs don’t use the entire screen, and this is quite normal with such a big display.

Visit settings> display> full-screen programs and find all those apps that aren’t highlighted and turn the option on.

Another solution is to tap on the current app buttons and touch the green expand icon which will then turn the program into full-screen mode.

The program drawer button is missing in the Galaxy C7 2017 like the physical button as Samsung desired to save some space by removing them and using gesture instead of them. So, if you aren’t getting how to open the program menu below would be the solutions for this issue.

Simply swipe anywhere at the bottom of the screen, and it will start the program tray. So, the practice is quite simple & easy for you all.

There is another solution to have a button in the bottom of the screen to start the app tray and drawer. To get the button, simply long press in any blank area on the screen and it will bring an edit and design page together with showing some desktop image options and widget. From there pick the settings icon and select ‘Apps button’. Now press on the show apps button followed by Save. This will bring a button in the base of the screen tapping on which you can open the program tray.

A few of the programs are freezing while others have said the device is freezing quite often.

Many users have stated that the Device Quality broker program is showing off an error message continuously without any motive which is really very annoying. This is an app that monitors the way the Wi-Fi connection is being used in the Galaxy C7 2017 device.

Android automobile issue is another frequent issue that is important to mention in this list as several users have complained about it also. They’ve said that the issue is confronted while trying to pair the device with Android Auto. If the pairing is done between auto and car, few apps like Spotify don’t work. Proceed through the solutions below for this issue.

#The Push Notification Is Being Delayed every time:

A number of the Samsung Galaxy C7 2017 consumers have said that they’re not receiving the notification instantly. It is definitely a big issue in case the notification is regarding your official function and you ought to get them right then. On the other hand, the solutions are all described below.

The insistent battery saving feature is an excellent attribute no uncertainty in the Android 7.0 and Samsung Galaxy C7 2017 also. So, a few changes are required in the settings, and the issue will be solved. Proceed towards Settings > program and tap on the Special access option situated in the top right menu following which you want to decide on the optimize battery usage option. A drop-down menu will be available there from where you will need to visit the option Change to and include all those programs for which the notification shouldn’t be delayed whatsoever.

Despite the fact that the auto-rotate attribute is enabled in the settings it is not working correctly in Galaxy C7 2017. This is the issue about which most users have complained.

While these common issues have relatively simple workarounds, you can find many others which aren’t as simple to cope with. Significantly, some models of the Galaxy C7 2017 and the Galaxy C7 2017 Plus are still displaying a noticeable level of reddish tint and are suffering from drops in Wi-Fi connectivity, in addition to wireless charging issues.