From The Mandalorian, Rogue Trip, Hamilton, Mulan, Cruella to Us Again, Frozen 2, Encanto, and many more, you will find it all on Disney Plus which is currently one of the biggest video streaming platforms similar to HBO Max, Amazon Prime Video, and others. It is constantly upping its programming by adding new content to its catalog from animated TV series to movies and Disney Plus Original content and more.

Perhaps Disney Plus is a cool place to hang out but only if everything is working properly. When there’s a Disney Plus audio and video is out of sync issue on-board, it becomes a harrowing task. Because the delay in audio and video can render watching the said content useless. Users have complained about this issue and here’s more you need to know as well as how to fix it. 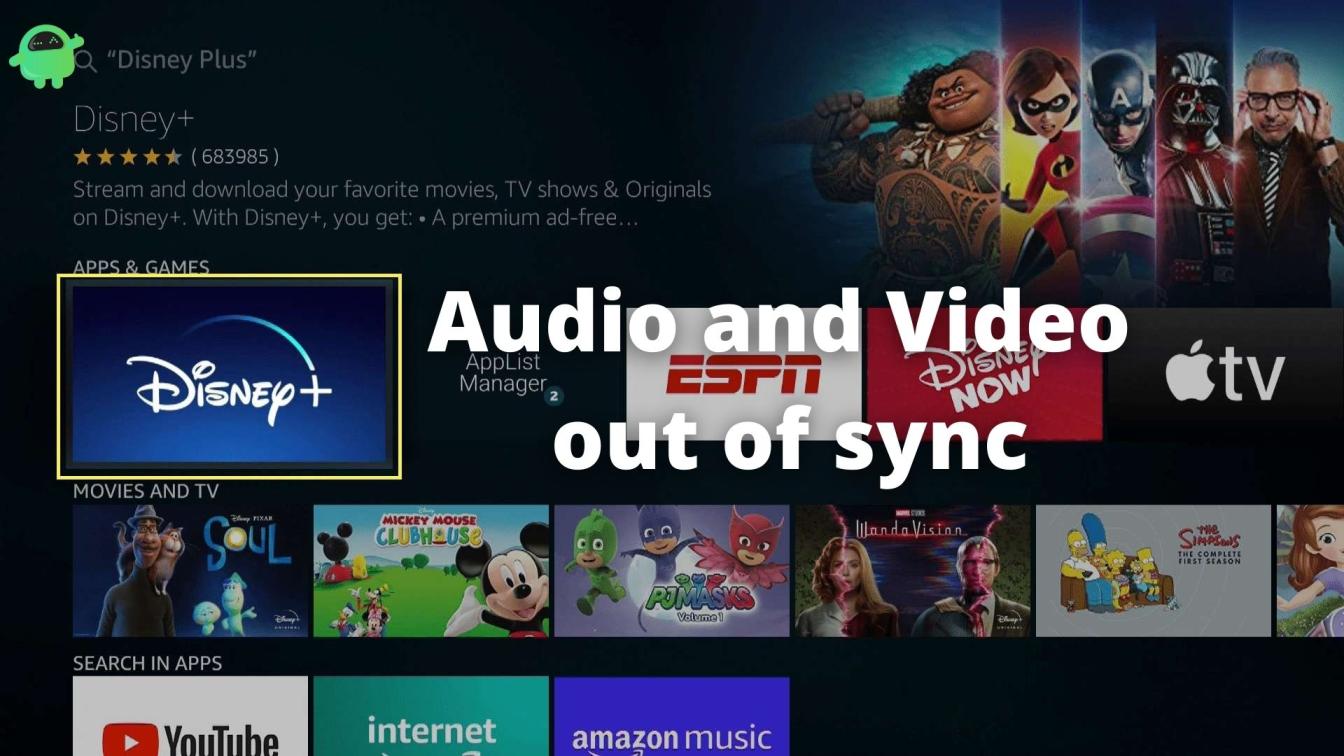 Why is my Disney Plus Audio and Video Out of Sync?

Disney Plus is a massive video streaming service handled by millions of users at once. This means although Disney Plus has servers all across the globe to handle demand, outages or a sudden spike in concurrency may cause an issue for hundreds of subscribers at once. One of the many issues that people come across is the Disney Plus audio and video is out of sync issue and that needs to be fixed immediately.

Turns out it could be because of a lot of reasons. Server failure or outage is obviously one reason. Others include outdated Disney app, buffering issues on the app causing the audio and video to go out of sync. There could be some problem with the output device aka the PC or TV you are connected to it could be an intermittent issue on Disney’s end.

Perhaps network issues can throw you off the rails as well. Turns out there can be a lot of issues and here are some of the methods that you can use to curb this issue.

How To Fix Disney Plus Audio and Video are Out of Sync Issue?

#1: Check out Disney Plus Server Outage

The first order of business towards fixing a Disney Plus audio and video out of sync issue is to check whether there’s an outage on Disney Plus (Disney+) or not. Used by millions, it is quite possible that all the servers or some servers targeted towards providing specific services are facing outage or the workload is beyond expectations.

In these cases, server outages can cause some of the services rendered either partially or not at all. Audio and video are two separate services possibly being handled by different servers. Audio lagging or playing ahead of the video can be one of the consequences of something’s wrong with the server. A Disney Plus Server Outage can help you find the culprit. Check out here.

Disney Plus is a service and Disney is the app that it works on. Since it’s an app and the app can run into a tonne of issues that could be super temporary, restarting the app can help. This is a will-surely-do troubleshooting method in most cases unless there’s something else that’s going wrong such as an issue with the output device.

In that case, why don’t you restart your PC or TV as well? Turns out the same rule applies with any device you can use as most of these issues require just a quick reboot and the issue goes pfff.

#3: Try with another video

I have gone through several instances where the audio is lagging or far ahead of the video on a specific video but everything’s normal with other videos. To be honest, this can happen on any movie, TV show, or other content and may not be specific to the whole stretch of episodes (in the case of TV shows) or movies. This can be termed as buffering problems and one way to determine if that’s the problem is using this method.

If you see audio and video out of sync issues on The Office US S01E01, try playing the next episode “S01E02”. If the problem persists, try another series/movie like “The Avengers”. If the problem is across all the content, either there are buffering problems or network issues or something’s wrong on Disney’s end.

Although this doesn’t give you a clear picture of the culprit, it does puts a few candidates front in the row so that you can use individual methods to fix them up.

If other videos or episodes of the same series are working fine, the problem lies on the Disney app or their end. Thus, updating the app can help. If the issue is not ironed out and lies on all content, problems with the internet connection can be the reason. Here are some of the methods to abide by.

The first thing you should do to test out the internet connection is to check the internet speed. You might be aware of Speedtest by Ookla or Fast.com where you can check your current uplink and downlink. Based on the current speed, you can proceed further with this method.

Perhaps temporary issues with the internet could be because of the router working tirelessly. This is a great avenue for bugs to pop up. Thus, a quick restart can potentially iron out this issue. Proceed once you are done with it.

Perhaps sometimes it can be basic as cables could be the cause of Disney Plus audio and video is out of sync issues. Although I would suspect untouched peripherals to have issues with wired connections, if you had moved the router or any cables in the near past or the cable was too taut or loose, it could throw tantrums. Unplug all the connections and reconnect as this is the way out.

Unless you don’t already know it, bandwidth plays a crucial role in streaming content online. This is the reason why you get 240p or 360p videos on YouTube with a weak internet connection. Apart from that, bandwidth is something that your network can offer and Disney Plus takes up a chunk of it.

Imagine it as a pipe with an inch diameter that allows for water to flow through. If there’s something blocking a certain part of the pipe, you have the remaining for use. In layman’s terms, if you have several devices using the internet on the same network, a good chunk of the bandwidth is being consumed. This means you have limited bandwidth for streaming. Check how many devices are online at the given time and if this is what’s causing the issue.

You could be using a TV or a soundbar or speakers or other output devices. Turns out these devices can have issues too translating into audio and video out of sync on Disney Plus. But you can fix it by simply reconnecting the cables and connections of these devices. Be it a soundbar or subwoofers or speakers or if you are using a TV to view Disney Plus, simply disconnect all the cables.

You will have to use guides respective to your TV make or model for guides on connecting TV via HDMI and the same goes for PC and other devices.

It becomes quintessential to ensure all the connections are laid off properly or else you have syncing issues with audio and video.

Cache speeds up the process of retrieval but often causes issues with the working of an app. Turns out clearing cache can fix the problem if the cache is the culprit. As usual, based on what device you are using, the process might differ. For instance, Android users can delete cache for Disney Plus while iOS users will have to reinstall the app totally.

In case the audio and video out of sync issue are localized to your device and no other device is facing this kind of issue, updating the app might help. Plus, updating the app helps iron out other bugs as well. Depending upon what device you are using, the process of updating Disney Plus might differ. You can search for instructions for your Android, iOS, Windows, macOS, or other OSes individually and follow the instructions.

That’s the end of our post on what the Disney Plus audio and video is out of sync issue and how you can actually fix it. Check out the troubleshooting methods available above and try one-by-one to find the cure for the curse. Hopefully, you will find a way out with this handy guide.